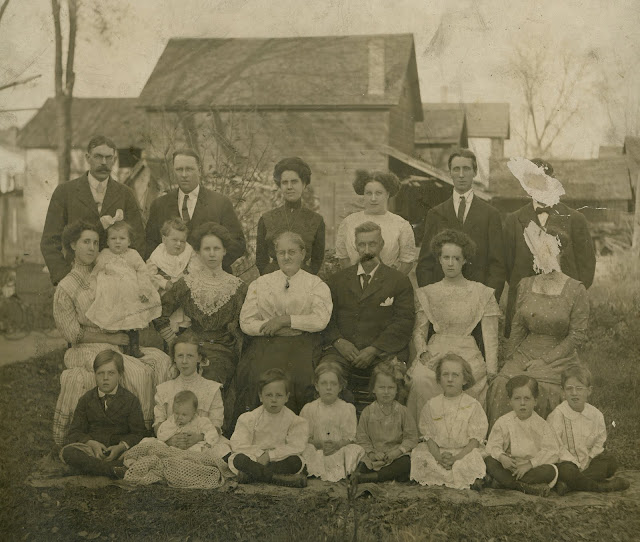 During my recent vacation in Florida I casually opened my morning email, coffee cup in hand, so that I was scrolling, deleting, and typing hunt and peck style with my free hand.  Moments into my morning routine, my eyes scrolling through the email  ads updates from places like Coldwater Creek, Knitpicks, Office Depot, and Eddie Bauer, stopped when I noticed a familiar address.  It was from another double cousin on the McDonnell & Allen side of my family AND there was a file attached.  When I opened it, I was thrilled stunned shocked . . . well, let's just say that I was very excited.  I was staring at the entire Allen Family including spouses and children . . . at least their bodies were all there.  I wish I could say the same for their faces.  June found the photo when she helped Mary Margaret's  daughter pack up her house after her death.  I thought Mary Margaret and I had sifted through, sorted, and analyzed every box of old family photos she had so this was like an unexpected gift. 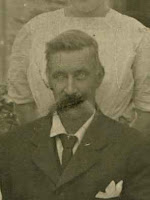 There is only one problem . . . two of the faces are scratched out completely!  James Allen has pencil scribbled over his mouth, and Flossie has one eye scribbled over.  Normally, scribbling or scratching on photos is done by a young child, but these scratches were not random and the intense anger can still be felt. In my mind's eye I see a woman  (Really, this does sound like a female type of thing) muttering angrily to herself  as she scratches out each face. She even kept scratching through two layers on Ernest's face.  What did Ernest and Nora do, and who was so angry that she obliterated their faces?  Was it someone in the photo?  Since James Allen's mouth is scribbled over, I assume that is her way of saying she didn't like his opinions? attitudes? decisions? rules? Family gossip is that he was rather strict, and then there is the fact that no one ever put a headstone on his grave.  Ouch!  But what is up with Flossie's one eye?  This is anger that has endured for over a hundred years.

MY FAMILY:
Back row from left to right - Owen Jerome McDonnell, Edward Thomas Moldt, Augusta (Gussie) Allen, Laura Allen, Herman Holdgrafer, and I am positive Ernest Thomas Allen even if he doesn't look very good in this photo.
Middle row from left to right - Elizabeth Burnett Allen McDonnell, baby Florence McDonnell based on her birth date, baby Harold Moldt, Anna Mae Allen Moldt (my great grandmother), Elanor Gilshannon Allen, James Bush Allen, Florence (Flossie) Allen Holdgrafer looking downright angry, and I am positive the next woman is Nora Tyler Allen even if she looks as bad as her husband in this photo.
Front Row from left to right - Ambrose McDonnell, Berenice Moldt (my grandmother) but I have no idea who the baby is except Florence Holdgrafer was born in March 1910 so this is a possibility, Edward Thomas Moldt Jr. (known as Doc for most of his life), Vivian McDonnell, possibly Vivian Holdgrafter, possibly Eleanor McDonnell (I could have the girls wrong), Owen James McDonnell, and probably Vincent Holdgrafer.

Some of the individuals I have identified only by their date of birth such as the Holdgrafer children.  If the photo is about 1910 then their ages would fill in the unknown children appropriately.


Ernest Thomas was the oldest child and the only son.  Ernest and Nora had no children. I have never seen a photo of him. A while back I tried to match the unknown photo on the right to him and wrote to some family members who might remember him or hoping they had an old photo.  Time and again, I got the same story.  All they remembered was that he was bald, and they all told me the same story.   Uncle Ernie was working in the yard when he was swarmed by insects, so he rubbed his head with insect repellent and then his hair fell out, and it never grew back.  The question is . . . is this the truth or just some Irish blarney?  I can tell that he still has his hair in the family photo above, but is the photo on the right also him?  Ernest T. was the street commissioner in Muscatine, Iowa from 1915-1929 and this photo is from a Muscatine studio. I think he looks like James B. Allen, but this might be wishful thinking.  So close but . . .I'm  still searching for the image of Ernest T.
Posted by Margel at 2:23 PM