Another Grand Visit with My Cousin

I have been on the road for the last three weekends and since school has now started, I can no longer indulge in endless hours searching through census records, sending to counties for copies of vital records, or writing this blog.  Please notice that I did not include time spent organizing my records - despite my best intentions at the beginning of the summer, I accomplished precious little.  Somehow, I always heard the siren's call of research. The lure  of finding that elusive marriage certificate or unraveling a family mystery could always pull me away from the tedium of organization.  As Scarlett O'Hara would say, maybe another day. . . . .

My day now begins at 5:15 a.m. with the whoosh and bubble of a watery stream coaxing me into consciousness.  I have one of those nature sounds alarm clocks that gently wakes you up.  After trying the sounds of loons, birds tweeting, fog horns and other assorted sounds, I settled on the gentle stream flowing over rocks. I could never go back to the jarring sound of a standard alarm.

If you recall in my last blog post, I had invited myself for another visit with my double cousin. Of course we  had such a good time, I couldn't wait very long and so only two weeks later, I again followed my GPS  to her home.  Since my last visit, she had purchased and installed a wireless printer/scanner.  I am totally in love with this printer and have already added it to my lengthy Christmas list.

We organized her boxes of photos and piled hundred and thirty year old county history books next to our seats on the sofa.  I connected to her wireless network with a bit of trouble that we finally diagnosed as operator error, and we filled our glasses with drinks and fresh ice.  We briefly discussed eating, but both agreed that we wanted to start going through our information.  Ahhhhhh. . . . . .like minds.

We first looked at and discussed the emails, she had received from a distant cousin in California.  This cousin first found me through Ancestry despite the fact that I have a private tree. (Why I have a private tree will be the subject of a future post).  The McDonnell brothers, Michael, Owen, John, and Bartholomew immigrated from County Cork Ireland to the Clinton county Iowa area in the mid 1800's.  Our ancestor is Owen and our California cousin's is Michael.  As the emails and attached photos came up, my brain screamed. . . . . HEY, wait a minute!!  I don't have all those photos.  So, as we sat inches apart on the loveseat, my double cousin, Mary, forwarded the email from our California cousin, Karen, to me.  Feeling very smug with our techno savvy, I reminded her to save the photo attachments to her genealogy folder on her computer.  Since she had not done this before, I offered to show her - no problem.  A half hour later, we were still working on it.  Her email  program was different from mine, and search as I might I could not find the "save attachment:" choice. We finally found a way, but it had about ten steps when it should have been one.  I went back to my email to show her how I did it.when . . . .What happened, the emails were gone?  We tried it again, and again they disappeared when I went back.  It was only later, when I returned home that I figured out what happened.  As I suspected, it was operator error again - meaning me!   Pride goeth before a fall.

We sat glued to our seats, sifting through files, and boxes and going online to search as questions

popped into our minds.  We answered some questions, but also created more.  Four hours later, we mentioned food again.  I boldly said that I would go out and get something for us.  We agreed on Subway, and Mary gave me directions to the closest one.  Unfortunately, I didn't listen.  I think I have spent too many days in the company of thirteen year olds.  Their habits have rubbed off on me.  In my mind, I knew that my handy dandy infallible GPS would find the closest subway and direct me turn by turn to the location.  I left her house and returned an hour later in frustration and humility.  First, I turned the wrong direction, RECALCULATING, RECALCULATING, then there was no Subway where it said there was.  I went by twice to be sure.  I reprogrammed the GPS for the next closest Subway.  Like a lemming I followed it as it led me into the heart of the town.  Yes, there was a Subway, but nowhere to park.  Forget this, I headed for a Burger King that I knew how to get to without a GPS.  Frustrated and angry, I pulled into the Burger King and decided to check my purse for cash. . . . . . . I had left it at Mary's house.  With my tail between my legs, I returned to her house, and had to admit that I hadn't really listened when she gave me the directions.  Would she mind telling me again.  Fifteen minutes later I returned with lunch. 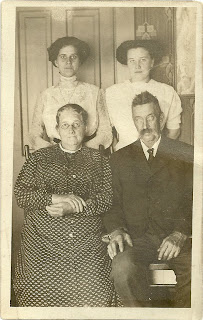 Now it was back to the fun, and so we continued until 11:30 AGAIN.  One of my wishes has been to find a photo of my g-g-grandmother, Elanor Gilshannon Allen.  I have several photos of her husband, James Bush Allen, but none of her.  Mary knew of my yearning to find her image.  As she handed me a photo, she said, "I think you're going to like this one"    I had a photo with an unidentified older lady for some time.  I knew she had been cut apart from a larger photo because you could see the hand of a man in the side of her picture.  Now, I had the rest of the photo and the back was labeled with the names of my g-g-grandparents and two of their daughters. Now that I look closely, she has that Irish upturned nose I see every time I look in the mirror.