Probate Records. . . More Than Just a Will 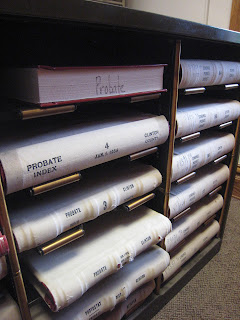 In a recent post I shared the will of Thomas Gilshannon, my 3x great grandfather who immigrated to Elk River, Iowa from Ireland in 1839.  The will was part of his probate record from 1888 but the fat probate file contained much more that just a will.  It details family relationships, and is a glimpse into life almost 125 years ago.  There were no restrictions on my handling of the probate records.  It is amazing that the paper was not brittle in the least, and I followed the lead of the clerk who, before she made a photocopy, bent the pages back to remove the crease. . .  gasp!  The clerks were pleasant and accommodating despite the fact that it meant a trip to the historic courthouse attic, reputed to be the resting place of more than an occasional bat, for the files.  I made sure to compliment them as they more than deserved my appreciation.

One common item I found interesting was that several of the bills and records were held together with this. . . .a straight pin!  The commonly used stapler did not come into common use for a couple more decades and the patent for the lowly paper clip was not until 1901. 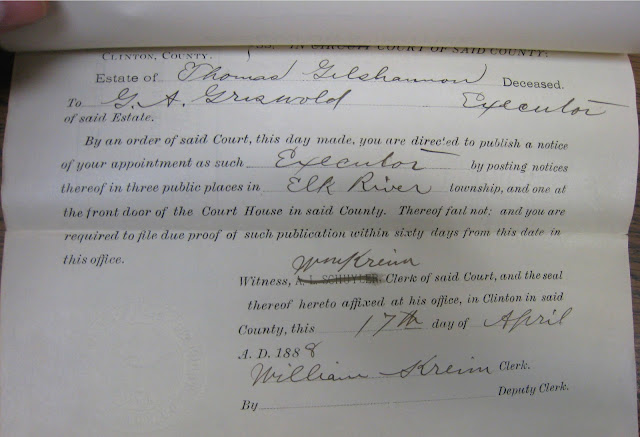 The law of the time required the public posting of a notice as to who was appointed executor in three public place, including the front door of the courthouse.  Then come back to the court and swear that this had been accomplished.  Why was G.A. Griswold appointed executor, and what was his relationship to Thomas Gilshannon??  Was he a banker, an attorney, a friend or a relative?  Thomas, in feeble health, wrote his will five years before his death so the choice of executor was a decision that he gave considerable thought.


Notice of Proving Will
State of Iowa
Clinton County
To all whom it may concern:
You are hereby notified that an instrument in writing purporting to be the Last Will and Testament of Thomas Gilshannon, late of said county, deceased was on the 23rd day of January, 1888 (at January term of said court) produced and publicly read in open Court by the Clerk of said Court; that said Court Clerk then fixed the 17th day of April, A.D.1888 and during the next term of said Court to be begun and held at the Court House in the city of Clinton, in said county, on the 17th day of April, 1888 as the time for proving the same, at which time and place you can appear and contest the proving and allowing of said instrument as the Last Will and Testament of said deceased, if you desire so to do.
In witness thereof, I, William Kreim, Clerk of said Court, have hereunto set my hand and affixed the seal of said Court at my office in the city of Clinton, in said county, this 17th day of February, A.D. 1888.
WILLIAM KREIM
Clerk of the District Court


A copy of the notice and the bill were submitted to the executor. The printer's fee was $6.00

There are many bills that are submitted to the executor and he needed to pay and then account for all of them.  Some are to fulfill the wishes of the deceased as set out in the will, some are required by law, and some are a practical result of a death in 1888.  Such is the following. 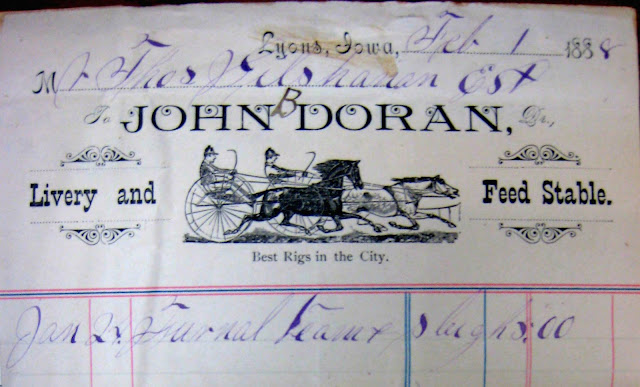 It appears that it cost $5.00 for a funeral team of horses and sleigh from John Doran who claimed to have the "Best Rigs in the City".
More in the next post. . .
Posted by Margel at 7:10 PM