Amanuensis Monday . . . The Will of Thomas Gilshannon From the Courthouse Attic


Well, I have returned from what has become a yearly trip to Clinton, Iowa, the home of a multitude of my ancestors.  For a while I thought this might be the last trip, but I discovered there is still more to document.  It seems like the more you find, the more you realize there is more to research. Many of the church records such as births, baptisms, marriage, and deaths for my family are located in the Catholic Historical Center which is located in St. Boniface, a closed parish.  At one time Clinton had five thriving parishes, but, due to escalating costs and dwindling attendance, they have merged into one parish which is located in a new church building.  Luckily, this magnificent building has found a second purpose. What happened to all of the records? Fortunately a dedicated church member was able to transcribe the older records that were moved from the five parishes to the new church.  As far as I know, she is the only one who has seen the original records since the church does not allow any access to them.  Even if they do not allow access, I hope that they digitize the records and keep a copy in two places so they are not lost one day due to human error or natural disaster.

Like last year, the records do not allow personal searching.  As before, one of the dedicated men who staff the CHC, Bill Foley, would scroll through, I would tell him the surnames I was researching, and he would read off the information.  They still do not have a printer for the computer holding the records database so my notes are scribbled and sometimes barely readable.  Bill was incredibly patient and willingly re-read names and dates for me as I asked.  I tried to read over his shoulder as he scrolled through since I discovered multiple incorrect transcriptions. I could recognize my family even when the names were garbled.  The strangest one was Dionysious when it was intended to be Dennis. . . oh, well.  As a volunteer transcriber for the 1940 census, I am completely sympathetic to the transcriber's difficulty.   If you have Clinton ancestors who were members of one of these churches, I encourage you to contact them.  You will not find a more helpful and enthusiastic group of fellows.  The center is open from 9-noon on Tuesdays and Saturdays and they have a facebook page.

In addition to the center, one of my main goals was to go to the county clerk's office and look at probate records.  I was told by the historical society that in Clinton, you can still look through the original records, and I am such a sucker for original records! In preparation, I called the clerk's office the week before I left and gave her the list of names I was researching and approximate death date for each. I had been told that it will often take them several days to get the records from the attic. After all, genealogy is not their primary job!  They were extraordinarily nice and accommodating. The courthouse was my first stop when I arrived in Clinton on Monday morning. Caroline, my contact, told me that she had only been able to find one name on my list, but that I was welcome to look through the index to see what I could find.  Oh, and, by the way, she explained that they could photocopy for .50 per page or I was welcome to take a photo of anything I wanted at no charge.   Whoaaaaa . . . I was both stunned, thrilled, and my purse held my camera with a fully charged battery.  I spent the next two hours going through the index books and, in fact, I did find more records.  When I left, I gave my new list to Caroline, and hoped that she might be able to retrieve them before I left for home two days later.  By early that same afternoon, I received a phone call telling me my records were ready to look at.  I already had an appointment to meet my 90+ cousin, John Brown, for a sit and chat that afternoon so the records would have to wait for Wednesday morning. 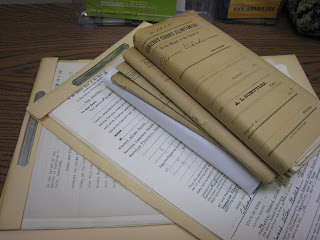 I arrived at the clerk's office shortly after they opened with a fully charged camera battery and a spare in my purse. Caroline pointed to a stack of records on a shelf and suggested that I to go to a table in the entry area and look through them.  The thick one on top made me grin from ear to ear.  It was the probate record of my 3x great grandfather . . . Thomas Gilshannon, born in County Meath, Ireland in 1810 and who immigrated to Iowa in 1839.  Below that was the record for my great grandmother, Anna Mae Shelko, nee Allen.  She was the granddaughter of Thomas. There were two that I hoped would prove to be relatives of her husband Edward Thomas Moldt, but no one sounded familiar so I have to assume they were not related.  Another two belonged to uncles and the last was the probate for the second wife of Thomas Gilshannon.  I was over the moon.  This was my first time looking at probate records, and it was thrilling.

I started with the ones that were flat first, but when I got to Thomas, I have to admit that I was breathing deeply. . . and I wasn't disappointed.

I unfolded the top paper and found his original will . . . tied with a red ribbon!

The Will of Thomas Gilshannon
of the Township of Elk River
Clinton County Iowa
I Thomas Gilshannon being in feeble heath But of sound mind in this the Seventy four year of my age do make and establish this as my Last Will and Testament.  "Imprimer" I give to my wife Bridget Gilshannon One Third in value of all my Real Estate. To Witt "The South East Quarter of Section Number Fourteen in Township Number Eighty three North of range Number Six East of the 5th P.M. Also the South West One fourth of the South West One fourth of Section Number Eight in Township Number Eighty three North of Range Number Seven East of the 5th P.M"
Said One Third to be all taken from the land in Section Fourteen Town (83)(?)R (6) so as include the Dwelling House and Farm Buildings theron.
Also
The Property regarded as Exempt under the Code of Iowa and which the law specifies & Also after My debts are paid The One third of the Proceeds of my Personal Property as the Code aforesaid provides.

Second The remainder of said Real Estate above described "That is the two thirds in value thereof I give to My Children Ellen M Allen Thomas Gilshannon Elisabeth Gilshannon Catherine Guerrin Bernard Gilshannon Mary Gilshannon and Henry Gilshannon in equal shares to be divided by them as they may seem best & proper
( In the above devises The Land taken by the C.M & St P. Railway is not included so long as the same is used by said Rail Road Company)  I also give to the aforesaid Children The Two thirds of the proceeds of my Personal property after my debts are paid in equal shares between them as they seem best.
Third as there is a Mortgage of One Thousand dollars on a portion of the land herein devised ^ given to Mrs Louisa Bohnes by myself and my wife^  I direct my Executor herein after named as soon after my death as Practiable to sell so much of my personal estate as he may deem proper to pay said Mortgage aforesaid on or before the same becomes due.  And also sell such other Personal property as may be necessary to pay debts expenses & including a suitable Tomb Stone for myself and my daughter Nancy Gilshannon who died in June 1882
Fourth I appoint GA Griswold my Executor of the Township of Elk River Clinton County Iowa in order to Carry into effect the provisions of this will
Sign by me on this second day of
April AD 1883
Thomas Gilshannon (his signature)
This will consisting of Two sheets of
paper was signed by the said Thomas Gilshannon
in our presenence April 2nd 1883
In testimony whereof we have set our hands in
his presence and in the presence of each other this 2nd day of April 1883
Charles Beatty    GA Griswold of Elk River Iowa

Thomas Gilshannon's signature is quite shaky looking.  On the early land records, he and his wife, Ellen, had to make a mark for their signature so I assume that he could not read or write.  From the will, it appears that he did learn to write his name.  I am sure his admitted feeble health influenced his signature as well.