Do you remember the old game with two drawings, usually comic book style, and you had to find the changes that had been made from one to the other.  Well, recently I played that game again, but this time with a family photo.  On my first family research trip recounted here the family photo below was shared by my double cousin Mary Margaret.  The event was a family get together to say goodbye to her father, Owen James McDonnell. He had enlisted and was leaving for the War.  Of course, the family wanted wish him Godspeed  so everyone could give him a hug and tell him to be careful.  This photograph records that day.

At first the only person I recognized was the older lady in the dark dress and the flower hat - that was DaDa Mae, my gr. grandmother.  No one else looked familiar, so I asked  Mary Margaret who she could identify?  Instantly she pointed from one to the other and rattled off names, pausing to think at some she didn't know.  I tried to write down the names and identify their location in the photo, but it was a dismal failure.  I needed to find another method. . . 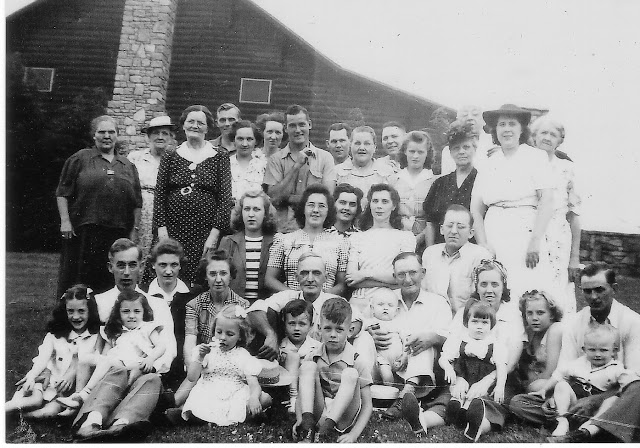 Then I had an inspiration. . . I would print out the photo as large as possible (the original was only 2x4) and ask Mary to write the names on it drawing arrows to each person.  And so she did.  As you can tell, there are still quite a few to still identify by the question mark on their chest or forehead. 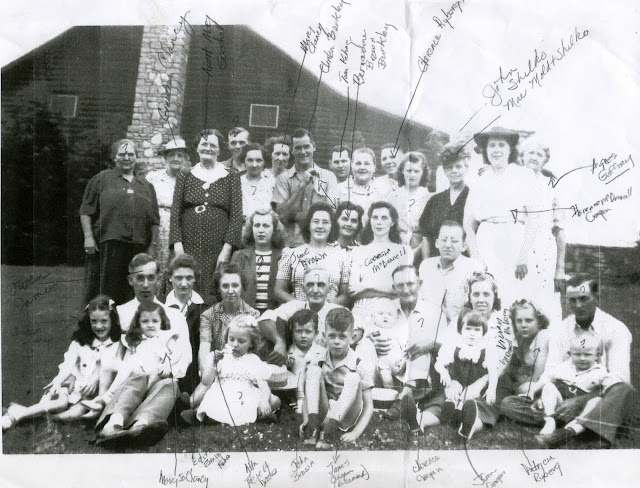 Then I asked, "If your father was going to war, where was your mother when this was taken?"  Why of course. . . she took the photo!
When I returned home, I put the photo away with others and scanned the new one with all the names to send to my brother.

*************************
Months passed.  Then one day, I stopped as I walked through my dining room and for the first time noticed the little 2x4 black and white photo in a back section (barely seen here in a previous post) of "The Pan". Funny, I had never noticed it before.  I paused, thinking of Mary Margaret and pulled it out.  Too bad his wife, wasn't in the photo, I thought.  Then it hit me. . . .  something is wrong with this photo!  Owen James's wife is in this photo.  I ran to my computer to pull up the original and the scan with names.  Sure enough, this was a different photo, and this one had Mary Margaret's mother in it.  As I began to look at the photo more carefully and compare it to the first one I had, I noticed other differences.  A young girl was standing in one and seated in another, some faces are hidden in one and visible in another, some have smiles when before they were somber.  Neither picture is perfect for everyone, but together they are perfect.

Isn't there a commercial like this?  I believe the photo below is the second "take" based on the squirming child who is much calmer in the photo above. Could there be other slightly different photographs from this same family get together?


How many differences can you spot? 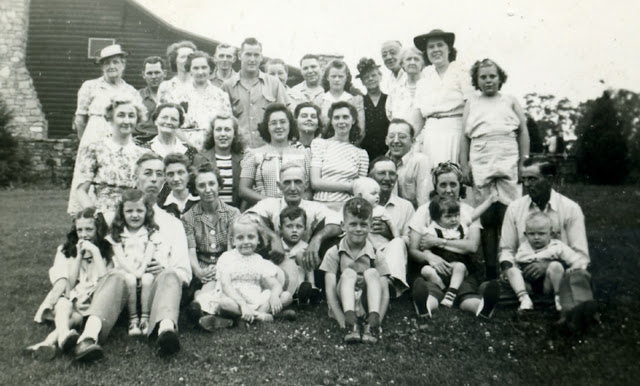 Do you know who took the second photo?

Please note:  If you are a family member who is pictured here and you object to this posting, let me know. and I will remove it immediately.  On the other hand, if you can help identify anyone in this photo, that has a ? on them, I would be very grateful. Corrections are welcome and encouraged.
Posted by Margel at 7:38 PM