The Ups and Downs of My First Research Trips

The first family history trip I ever took was to my visit my second cousin once removed, who my brother had connected with online. Mistakenly he posted some misinformation which came from a hand scribbled note from a relative, and she corrected him. We chit-chatted back and forth, enjoying the discovery of a "new to us" relative and realized we had information to share with each other. Since she only lived 3 hours away, we made a date. My total preparation for this adventure was a pen, paper, camera, a few photos to share and information about "the old man with the long white beard" in our family photos. This information came from another online connection I made with a distant cousin in Canada. My brother, more prepared than I, brought a scanner and laptop computer with his genealogy files on it. He also brought his wife who was his personal secretary, go-fer, and all-round support person. I was incredibly excited ,and meeting our cousin was beyond my wildest expectations. This was my first experience with the intense high genealogy could create. We spent several hours sharing, laughing and comparing stories. We had stacks of information, photos, and even a video of our "new" cousin reciting the story told by her grandfather to her father of our relation to MacIan the Red Fox of Glencoe. We learned that family lore told how Sean McDonnell was stabbed by a British soldier and died of peritonitis as a result. And there in the corner of her living room was a child's rocker that she said belonged to my gr. grandmother. 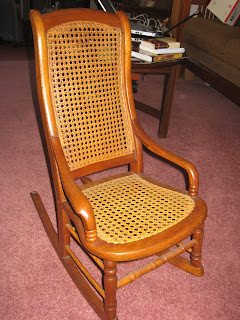 I remember visiting my gr. grandmother and have always felt a strong connection to her because of our mutual love of sewing. I am the only daughter of her only daughter's only daughter. It was all so emotional - in a very very wonderful way! We agreed that we needed to get together again, but as we were leaving she asked if we had talked with our mother's first cousin. Was she still living we asked? Of course! and with a quick computer search she found the phone number. I called her number, and as I was introducing myself, she started screaming with joy at hearing from us - literally. We felt the same way. Yes, she was home and yes, she would like us to stop by. We (really my brother because I had no idea how to do this) reprogrammed the GPS in the car and planned a new route home that would take us to the home of our mother's first cousin, Mary Farley. This was a name we heard often while growing up.

We arrived at her house as the sun was setting so we knew it would be a short visit. The GPS was an invaluable tool in our spur-of-the moment route change. I was very impressed and silently added it to my Christmas wish list. We hugged and hugged and smiled until our faces hurt. She brought out a family photo album, and she narrated as we paged through. It was a whirlwind trip through the family and 2338 W. Washington Blvd.. You see she and her mother, Anna Marie, moved back after her father died. She and my mother were only seven months apart in age, and my grandparents were living there also. It quickly became clear that we needed a longer visit. We had so many questions. Thus was born, our second family history trip.

As we headed home late that night, I searched around for the large envelope of photos and information that we had taken with us and then filled with new photos and information. I looked and looked, but the car was only so big. Where could it be . . . ? Yes, in my excitement I left it on the dining room table we sat at for hours all afternoon. So ends my first family history trip.
Posted by Margel at 7:33 PM