The Spoons of Berenice 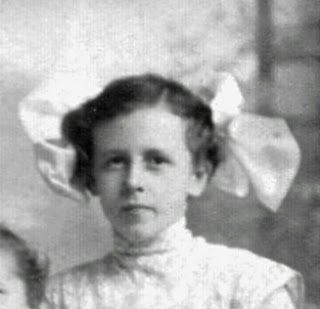 I have just returned from a glorious weekend knitting retreat with twelve knitting friends.  Our cabin looked out on the frozen lake, there was a continual fire in the fireplace, snowflakes out the window, lots of laughter and answers for all of our knitting questions.  It definitely was rejuvenating.

Because most (but if you insist on honesty, then all) of the ladies in the group are not interested in genealogy, I tried to keep my family history comments to myself, but . . . some did accidentally slip out.  Before I left, my Famuggle daughter warned reminded me just how boring genealogy is to others.  Since they are not technically family, my knitting friends cannot be labeled Famuggles but rather they belong to a sub set called Fruggles.  After one such slip up, I decided the next time to try and turn the conversation to something more universally acceptable.  I asked each person if they had a cherished family possession that had been passed down to them, and why did they cherish it?  Amazingly, everyone had something, and some had difficulty choosing just one.  I heard about Christmas ornaments, family bibles, immigrant trunks, and a chest of drawers.  As each person told about their possession their voice became animated, and the emotion attached to the object was clear.  Here was a group of non-genealogists sharing their family history. . . and enjoying it.

My question was a result of an unpublished post that had been languishing in my que for several months. . . The Spoons of Berenice. Several times, I would try to write only to delete most of it.  It just wouldn't come together.  Every Christmas for her first thirteen years my grandmother, Berenice Moldt, received a sterling silver spoon as a gift.  The spoons were sometimes beautifully elaborate, and, occasionally, dreadfully plain.

Each spoon had the year engraved on it and usually her name, always misspelled as Bernice, or her initials.  Sadly, she told me when I was younger who gave them to her, but I have long forgotten.  Now I am on a quest to find out.

The first spoon tells us that these were Christmas gifts because of the complete date of  December 25, 1899 on the handle.  I assume that it is a gift from a woman, possibly a grandmother or an aunt.  It would not be her mother with the misspelled name.  Her name was Berenice (rhymes with furnace) rather than the more common Ber-niece.

One of my favorites it the 1908 spoon which had an image of St. Patrick's church in Clinton, IA carved into the bowl section.   This leads me to believe that the relative was Catholic, possibly a member of the church, and her father's side of the family was not.  My grandmother had aunts on her mother's side, Elizabeth (Nettie) McDonnell, Florence (Flossie) Holdgrafer, Augusta (Gussie) Brown and Laura Tietjen - so maybe it was one of them.

Strangely, there are two spoons with a 1903 date.

The last date we have on a spoon is 1912.  Her grandmother died in 1914, but wouldn't she have known how to spell her name?  I can just imagine the polite "thank you", but lack of enthusiasm, that probably accompanied the opening of these predictable yearly gifts by the young girl pictured above. Yet, this is the gift she chose to keep and cherish and travel through life with her.  My grandparents moved often so possessions were chosen carefully. Was it the gift or the giver that gave these spoons such importance?   I wonder . . . did anyone else in the family receive spoons such as these as a gift?  I have no idea.  If you do, please contact me.

This then, I've discovered, is the secret bridge from our world to the Famuggle world.  We can talk with Famuggles and Fruggles about family history if we pretend it is just about the object.   Shhhh . . .we know the truth.  I invite you to try it. See if you get the same reaction that I did.  Do you think it's possible we might even convert a few . . . . . .
Posted by Margel at 7:13 PM