Mother's Pan is Mine for the Coming Year


Yesterday I received an email from my brother asking why I had not posted about THE PAN yet.  My response was T. I. M. E.   Since returning to school after the holiday, I have been drowning in work.  Most evenings I didn't leave school until after 5:00 so when I arrived home I would quickly sink into a comfy chair and enjoy my dinner in front of the television. 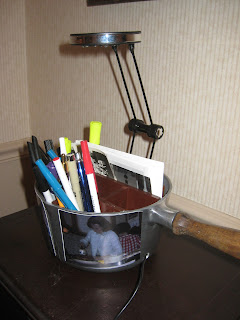 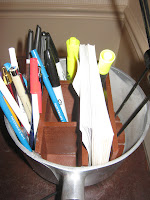 But today is the day to report on  the new decoration for THE PAN.  I introduced this pan and our Christmas tradition several weeks ago in a previous post titled Holiday Fun for Genealogists.  As we were all working in the kitchen preparing our traditional prime rib dinner, my brother started telling me that he had discovered some new photos from when we were young.  He would show them to me later, he said.  Later, as we sat around opening our gifts, his words came back to me when I opened a box that was so large it had to be THE PAN.  I carefully lifted it out.  The first thing I noticed was that it had been shined up and had something tall protruding from the pan. I followed it down into the pan and then noticed that it had an electrical cord coming out from a hole in the pan.  Oh, it was a light!  At this point I heard my brother say that now I would be keeping it on my desk for the coming year.  He made a fitted wooden insert to hold my pen,  pencils, markers and calculators.  The only thing missing is a place for family photos . . . . wait. . . a few photos are tucked into a slot at the back and afixed to the outside. The photos are familiar, but . . . something is not right.  I protest, "These have been Photoshopped I claim".  "I don't know what you mean, he replies in a syrupy voice.  Now I ask you, do you think these are original or has some 21st century digital sleight of hand been employed?

I now have a year to plan.  Any suggestions, but remember my brother reads this blog??
Posted by Margel at 5:39 PM