Well, Geneabloggers designates this surname Saturday, and there is only one surname for this Saturday and that is Guilfoil.  I know I mentioned this surname in a previous post about my summer family history trip to Clinton, Iowa, but so much has happened since then.

As you might have realized, I have been under the delusion illusion that only a few interested family members have read my blog and half of them have been coerced by my repetitive question, "Have you read my latest blog post?"  I ignore their eyeroll when they answer, "Not recently".  Now, as you can tell, I have a very boring basic blog layout - no buttons for twitter, facebook, or list of blogs I follow, no beautiful family photo at the top, and no button to conveniently email me with questions.   While, I hope to snazzify my look in the near future, it isn't a priority at this moment.  So you can imagine my surprise when I discovered  several comments from someone researching the same Guilfoil (the officially correct spelling) line.  How did she find me?  What happened to being invisible?  I know that this blog is on the internet, but I was operating on the assumption that I was the proverbial needle in a haystack. After all, I never registered my blog with Geneabloggers, I have a blog name that doesn't exactly roll off the tongue and, doesn't include any "genealogy type" words in it that might attract a search.  What a surprise - a wonderful surprise, and then she told me that another Guilfoil descendant told her about my blog.  You mean there is another person who stumbled across me too?

I  realized the wonder of internet connections, when she told me that my  g-g-g-grandmother, Ellen Guilfoil, also had a brother Michael who lived in the Sabula/Clinton area.  We knew she had a brother, James because of the 1850 census I included in an earlier post but although we found other names similar to Guilfoil, we couldn't make a connection.  I only just discovered that Sabula is in two different counties - Clinton and Jackson - and it was closer to go to Illinois to get married than it was to go to Clinton because of the bridges.  So that means researching two states in addition to two counties even when they didn't move.  I never knew about Michael, AND she never knew about Ellen. Yippee, this is the my family connection to the Guilfoils that I found in Evergreen cemetery in Sabula, Iowa.  To top it off,  she isn't even a direct descendant.  She is descendant of Michael's wife, Zilpha's - don't ya just love the old names - and her second husband McGann. it turns out that Zilpha's will was the key to connecting the families.  Confusing?  Nah, I know this is clear and understandable for anyone who is interested in genealogy, unlike when I was telling my daughter. I got the eyeroll again, accompanied by a loud sigh. 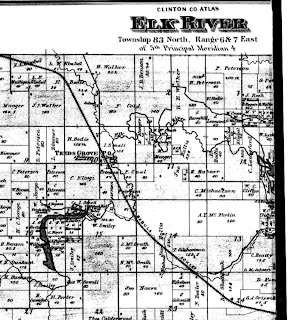 Now for my biggest surprise. One hour after I returned home from my visiting with my double cousin, the phone rang.  As she introduced herself, I spaced out on her first and last name, because I only heard Guilfoil in the middle.  She was a descendant of the same Michael Guilfoil, mentioned above, and she didn't know about Ellen either.  How could this be when they were all listed in the census together?  Oh yeahhhh. . . . . Ellen was married and only her married name was listed.  Meanwhile, my new cousins wondered why the Guilfoils were living with the Gilshannons in Elk River township. They had run across the name, but didn't know how it connected to their Guilfoil family. Are you ready for this?  It turns out that John, Ellen's father, and James, her brother, were ALSO listed in the census in Jackson county just one month later living down the road from Michael. They were listed as Guilford in this census. As I looked at this new record that I had probably dismissed at sometime in the past, it became clear that it was definitely them.  What incredible luck this was because if this had been reversed with the Jackson county census was taken first and the Clinton county second, they might not have been listed at all.

Wow!  Now I began to doubt myself.  I needed to find some tangible record of Ellen Guilfoil but where?  We have not yet found a death record and our trip to Clinton didn't turn up her burial location. After thinking and re-thinking, I decided to take my own advice. I was browsing Ancestry.com one day last week during my lunch hour when I  thought I would check out the Illinois Archives.  Surely, I had checked for her here before, but let's give it one more try before the bell rings and I am back to teacher mode.  Groom's name: Gilshannon and it's multitude of variations. . . . no luck.  Then Bride's name:  Guilfoil. . . . bingo! And with the correct spelling.  It listed  an Ellen Guilfoil marriage to Thomas Gulshan in 1847 in JoDaviess county, Illinois.  I couldn't believe it. I then followed the path explaining how to obtain a copy of the original record and called The Illinois Regional Archives Depository (IRAD) at Northern Illinois University.  The nice young man took my information and explained that there would be no charge.  Unbelievable!

Then a few days ago, I received the following record.  This documents the previously assumed. 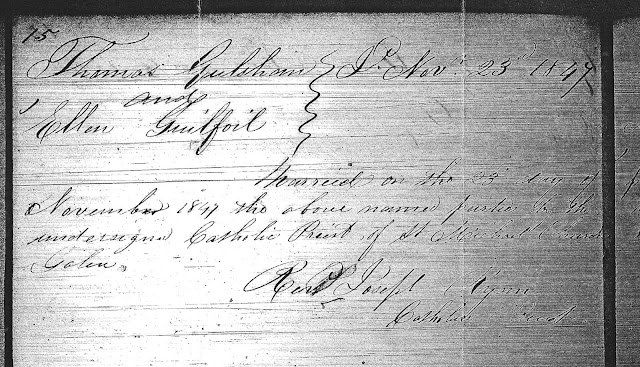 Thomas and Ellen - I now pronounce you man and wife!

Genealogy is just so much fun.

Editorial Note: I do realize that a surname Saturday post is intended to be posted on Saturday, but I started it on Saturday so I think it still qualifies.
Posted by Margel at 6:07 AM