Leaving the Chicago area, I set the GPS for my next destination - the home of my double second cousin once removed!  She is also the first relative that my brother and I met through  our genealogy research and then visited. I refer you to my post about my first family research trip.  While the first trip was short and definitely all about our shared family history, this trip felt more like a family visit in which we happened to discuss our common family lineage.  She generously invited me to spend the night, and I stopped at a Whole Foods on the way to pick up a salad for our lunch.  We certainly didn't want to spend our precious time with the mundane chores of life like making and cleaning up meals.

Now, to explain how we are double cousins once removed. My grandmother's aunt married my grandfather's uncle so I am related to both her grandparents.  Because we do not have an equal number of descended generations and are off one, we are once removed!  However, I claim that the double connection must make us "closer" relatives!

We quickly ate lunch, said goodbye to her company and plopped ourselves next to each other on her sofa with our laptops open on our laps.  I showed her the Clinton County Marriage Register files that I had downloaded from a  Family History film I ordered earlier in the summer. While most of the records had all of the information filled, we lamented the blank lines in the records for our ancestors.  Why would they both have so many blanks?  Then Mary noticed a pattern. All of the marriages performed by Father Murray at St. Patrick's had the bare minimum of information. That was the explanation . . .It was the priest's fault!  I am hoping that the church will have the records/information that they did not give to the county.  Mae Allen, above record, is my gr. grandmother.  Bernette Allen, in the record below, is my gr. grandmother's sister.


Then as we were going through my computer files, we stopped at a scan of notes made by another relative.  It was a list of names and relationships for Bridget O'Callahan McDonnell's sisters and brothers. Now, Bridget was my g-gr.grandmother and Mary's gr.grandmother.  She immigrated from Cobh, Ireland about 1854 when she was 18 years old as a bond servant.  Mary let out a gasp and said that she had never seen this information before and quickly pulled out a very old photo album. Now our detective work really began. . . .  The photos were identified on the album pages, but the photos had all been removed from their slots.  We carefully listed all of the names, and hoped that we would be able to match them up. Included were four tintypes, and, at first, I thought those were from an earlier time period, but when I did a little research on the internet after returning home, I learned that they existed during the same time period as the parlor cards.  HELP! I need Maureen Taylor, the Photo Detective, to sort this out.  There were a few photos with some information, name, or relationship.  Not a one had a complete name.  We had a photo listing the person as Bridget's sister - which one?  We had two girls named Regan, no first name.  We have Leon McCarthy's father - but how is he related to us?  The one tintype of the very handsome fellow on the right above, we determined had to be Owen William McDonnell, Bridget's husband. Do you think he is a younger version of the known photo of Owen on the left above?  Our excitement began to give way to frustration, but we wouldn't give up. We sorted, resorted, speculated, and compared the photos the rest of the day. I loved that Mary was as enthusiastic as I was.  We are kindred spirits. 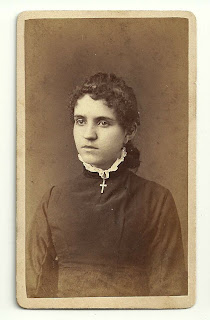 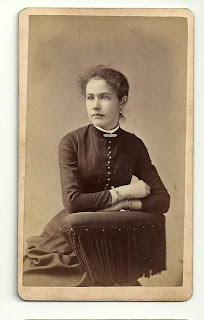 An interesting  possible connection that, do to my current political beliefs,  I hesitate to mention is the Regan girls.  It seems that quite a few years ago, Ronald Reagan's mother came to the Clinton area to try and find a Reagan connection that she had followed there. She even had a yellowed copy of  a newspaper article covering the story.  According to Mary, Mrs. Reagan thought the connection was with  Owen William McDonnell's family.  BUT, using the scanned notes of Bridget's sisters and brothers with the two photos labeled Reagan, the connection might be through Bridget O'Callahan's sister, Mary who married a Michael Reagan.  Do you think these girls look like our former president?  The back of the photos identify the photography studio as Kelly's in Cinncinnati for the young lady on the right and Brownell's (formerly Kelly's) for the one on the left.

We had a fast food dinner with the paper wrappers for a plate and easy clean up.  The ice in our glasses of pop melted before we finished it as we  went through albums, scanned photos and documents, and continually tried to compare the unknown photos with ones that were labeled.  We discussed, analyzed, sorted and stacked.  It was soooooo much fun!  As I noticed that my derriere was feeling numb, and I was beginning to yawn, I asked what time it was.  The answer: 11:30!  Oh my gosh, that was 12:30 my time.  We couldn't believe it.  We needed to go to bed . . . . but let's look at just one more box.

The next day, we took up where we left off.  It was so much fun listening to the stories from our family.  A great aunt stopped by for a visit, and I had the chance to ask a few questions of my own.  She reminisced about playing with my mother when they were both young.  It is so nice to get a different perspective on a person, but her memory of  my mother was that she always wanted her own way, and in that respect, she didn't change much as she grew up.

What a delightful time we had.  There was still so much to talk about, that I boldly invited myself to come back in a few weeks.  Guess what?  She agreed.  Now I need to do a little research in the meantime to see if we can solve a mystery or two.

Note to Mary:  You'll notice that I didn't mention the whole scanner fiasco.
Note to everyone else:  You don't want to know!
Posted by Margel at 2:29 PM