When Were You at a Historic Event?

It has been a long long time since I wrote anything on this blog, but  over the years I  would go back and write down an idea that I had for a blog post, thinking that when I started writing again I would have some topics to get me started.  Sadly, it has been so long that I am not sure what I was thinking for some too many of the topics.  This should be a lesson for me to write a bit more that just a title in the future. However,  the idea of  being present or involved in a historic event has always interested me.  As I research my ancestors, I always find it interesting, and sometimes uncomfortable, when I discover them at a historic event such as the San Francisco earthquake, the surrender of John Burgoyne at Saratoga, or the saddest, the Sand Creek Massacre.  Most of us intersect history at some point in our lives, and I believe we should record our experiences for our descendants because history does not tell the story or experiences of the common person during these times.
For me it was April of 1968 and the recent events have encouraged me to write about my experience during Spring vacation during my junior year at Purdue University.
Let me preface this by telling you that I was always the Good Girl.  I was the oldest in my family, a good student and definitely a rule follower! My mother never learned the truth until several decades later.
Early in 1968 as winter was winding down one of my sorority sisters, Christy Fisher, planned to visit Washington D.C. over Spring vacation and begged everyone trying to find someone to go with her.  I don't remember her exact reason, but I agreed.  The question was how could I sell this to my parents? I went through several options but then I went with the tried and true method - I lied!  Christy was driving her car so the transportation was cheap affordable, but what about where we would stay.  We found out that there was a chapter of our sorority located at American University in D.C. so we told our parents that we would be safely staying at their chapter house.  The only problem was that they didn't have houses, and they lived in the dorms. So the first thing we had to do when we got there was to contact them in case our parents called - but why would they - and that way they could cover for us.  We actually stayed in a very cheap motel outside of D.C. in Maryland.  I still remember the sign out front, "Truckkers Welcome".  No that is not a typo. 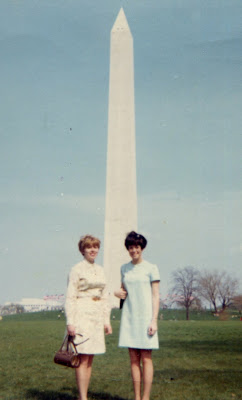 At first everything went well, and we did the usual tourist stuff. We went to the Lincoln Memorial, and climbed the Washington Monument taking the elevator for the trip down.  I strongly suggest you do it the opposite way. We even went to the Capital and met with our local senator who at that time was Vance Hartke.  The weather was beautiful, and the cherry blossoms were in full bloom. We took our photo in front of the White house and planned to visit the next day.  Ahhhh, the best laid plans . . .


Early that evening we learned that Martin Luther King had been shot, but we kept on sightseeing.  What can I say . . . we were foolish and young.  It seemed quiet and that evening we even walked up to a White House guard building and started flirting with the guard.  He flirted back and then got coffee from inside the White House for us. We stayed downtown as everything appeared calm but had little money for dinner so when we saw a bar that advertised free cheese and crackers with a drink order, we decided that cheese and crackers sounded like the perfect dinner.  Then it got weird when the middle-aged owner of the bar and his friend joined us uninvited.  We stuffed down as much cheese and crackers as we could while we nursed one beer each and made our exit quickly. 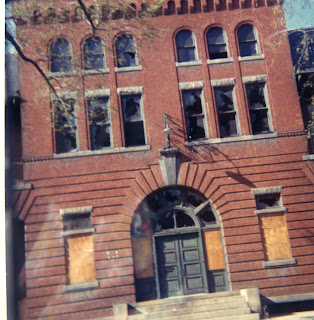 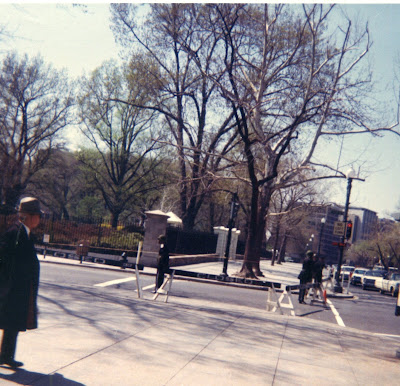 Now Washington D.C. was ahead of the times with roundabouts in 1968.They had many of them and the same street didn't always go off directly opposite from where you got on.  Somehow, we always seemed to get off our intended route.  Admittedly, I was the navigator and was not the best map reader at that time.  So the next morning we again headed back into D.C., and as I was gazing out of the window, I noticed a building that had burned and casually remarked on it, but then there was another, and by the third one which was still smouldering, it finally dawned on me what must have happened.  Christy and I were both nervous at this point but continued on into D.C. following an African American soldier in a car ahead of us who waved for us to follow him. Remember we were young and foolish.  Once in D.C. we sadly discovered that our White House tour was cancelled.  Actually the White House had barricades and armed military around it. We saw tanks rolling through the streets!  The military was everywhere.  Of course, we continued touring D.C. but there were constant fire trucks as the day went on.  On the back of one photo of a fire truck it said, "One of fifteen fire trucks in 15 minutes".  We wisely decided to cut short our day and head back to our motel early. 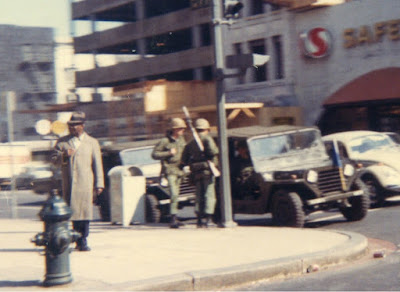 Now in addition to a ungodly amount of roundabouts, the street names are also a confusing mess.  There are two 1st streets - First street NE and First street NW and that pattern continues numerically.  The cross streets are similarly named alphabetically - F street NE and F street NW.  Remember that I was the navigator, and somehow I read the map wrong because we ended up going in the exact opposite direction that we needed to travel. I just didn't realize it. The traffic became heavier and more and more fire trucks went by announcing a curfew from bull horns as they 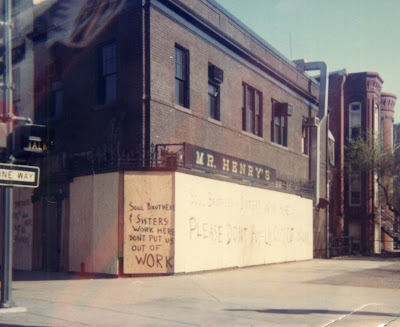 went through.  We saw more evidence of riots and burned buildings.  Several of the buildings had been boarded up and the message on them said, "Soul Brothers and Soul Sisters work here. Please don't put us out of work."  I was frantically turning the map round and round trying to figure out where we were as the fire trucks announced earlier and earlier curfews.  When they said all men women and children should be off the street by 4 p.m. I decided we needed to turn around because we were definitely NOT headed toward our hotel. Christy agreed and immediately turned into the closest business parking area.  As I looked across the lot to the destroyed building with broken windows I realized it was a liquor store that was currently being looted by two young men who paused momentarily to stare at us.  I remember screaming at Christy to get us out of there - multiple times!  The traffic was bumper to bumper as we drove north.   I finally realized the confusing naming pattern for the streets as we passed 2nd street twice. 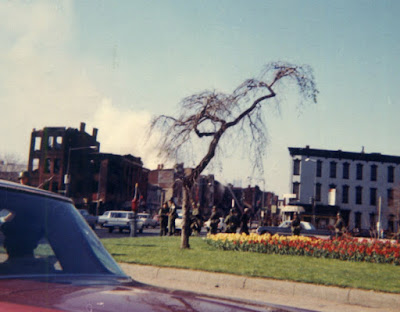 Remember when I assumed that our parents would never need to phone us - oops!  Luckily, we were saved, by the fact that all of the phone lines were overloaded, and so there was no way to call in or out of the city.  I think I had a total of $1 in my purse at the time, and Christy didn't have much more.  We found a McDonalds, and we each got a 25 cent hamburger and fries.
I don't remember much about the trip home.


The photos were taken with an inexpensive disposable  point and shoot camera which was standard for the time, but there was no zoom and the quality is terrible.  I thought I remembered other photos but these are all that I have found.  It was a historic time and place.

When were you swept up in history?
Posted by Margel at 1:55 PM No comments: