The Girls of Chicago's Providence High School . . . What Became of Them?

My mother, Gloria Kennelly, graduated from Chicago's Providence High School in 1942.  During that time period, Providence was a Catholic high school for girls.  She lived in the Garfield Park neighborhood, and so it was just a few blocks away on the opposite side of the park.  I wonder if she walked around the park or through it?

My previous post about the home the Kennelly family rented for many years caused me to drag out the large cardboard box of photos I discovered on my closet shelf last summer and sift through it once again.  I always get bogged down looking through family photos. Time stands still as I pull my glasses to the end of my nose, tilt my head down so I can peer over them, and bring the photos up to within five inches of my face hoping to see some small clue that is hidden in it.  Invariably, I start to compare, sort, stack, and categorize only to find that even with my many, many categories, there are photos that don't really fit anywhere . . . or, conversely, fit everywhere.  What should I do?  So I gather them together, and, in true Scarlett O'Hara fashion, plan to deal with them tomorrow.

Well, tomorrow arrived.  Once again, I started to sort and stack. One of my stacks I mentally labeled as Providence High School.  As I pulled pile after pile of photos out of the box, the Providence stack grew larger. Naturally, my mother had not labeled any of the photos with names.  My curiousity about these girls grew as I saw them posing and laughing in photo after photo.  I love a photo set.  It seems to tell more of a story than a single photo, and I have shared photo sets before on this blog.

I wonder . . . whatever happened to them?  World War II was raging, the only eligible men were under 16 or over 40, and rationing of consumer goods had just begun. But in the faces of these 18 year old girls all you see is excitement and expectation for the life in front of them.  What were their lives like?  Happy or heartbreaking?  Exciting or wasted?  Do they have children or grandchildren who would cherish a glimpse into their grandma's past?  Are there 1942 graduates still around who could identify them?  Will you help me?


I present the Girls of Providence circa 1942 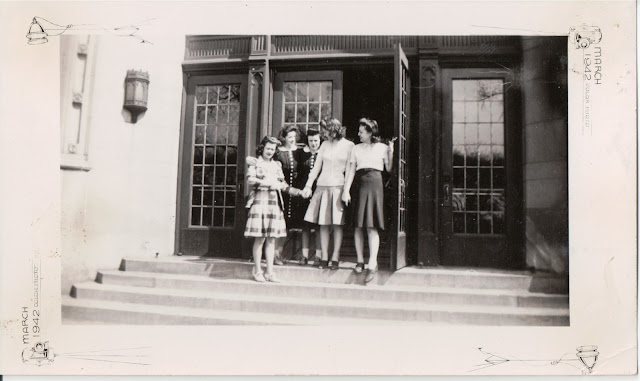 Coming out the front doors of Providence - March 1942. 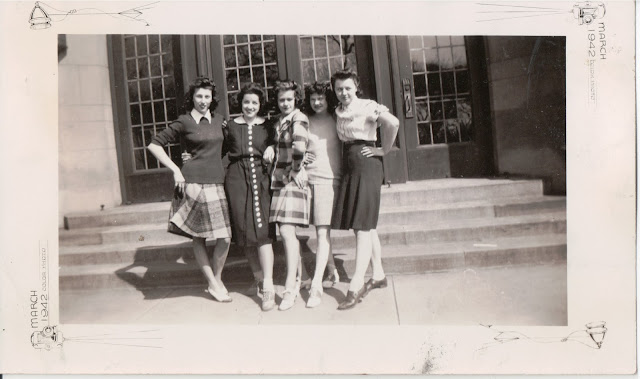 Compare to the photo above to discover the photographer for this photo. My mother, Gloria Kennelly, on far left. 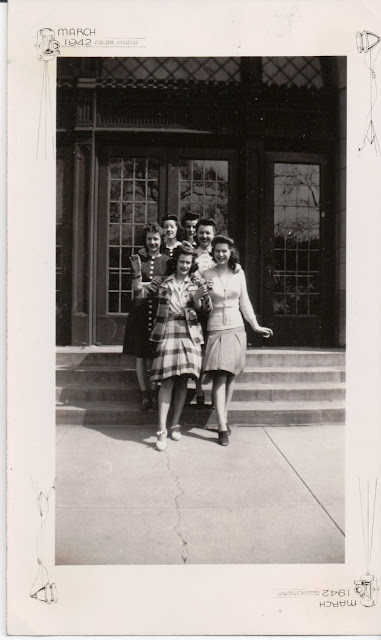 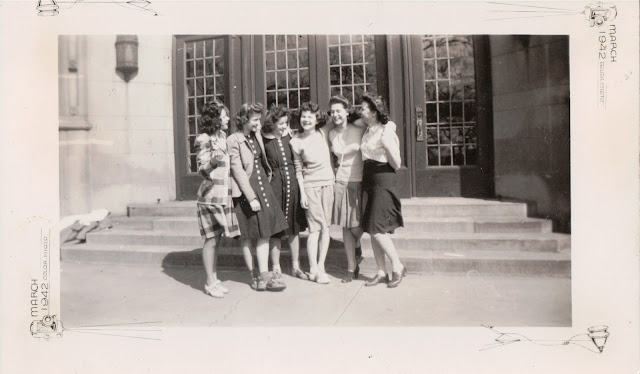 Chicago is the windy city.  Forget the hair . . . they're all smiles! 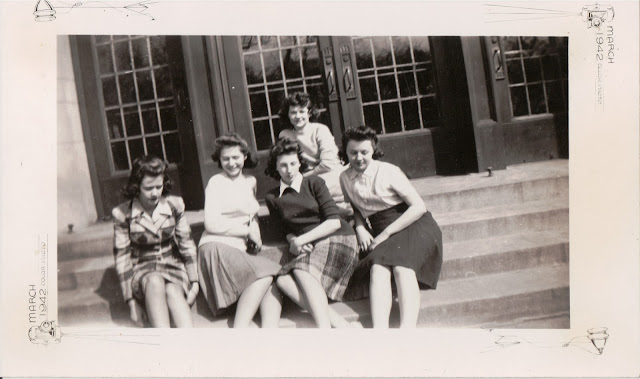 Let's take a break.   What else can we do?  Gloria Kennelly front right in plaid skirt. 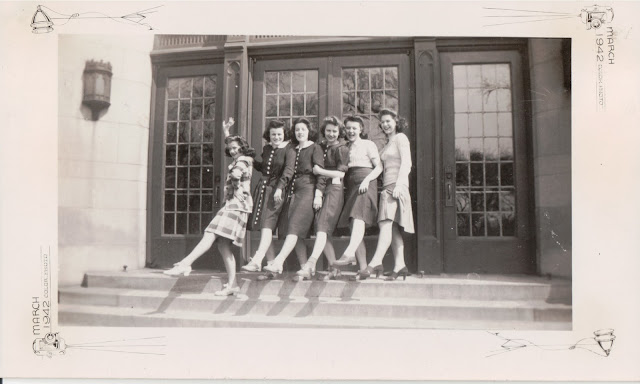 Do you get a feel for personalities from this set?  Who is shy and who is gregarious? 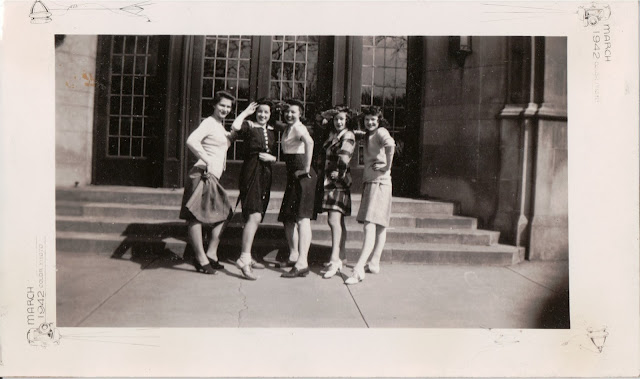 Is the salute a sign of the times or are they saying, "Goodbye high school.  Hello life"

On another day outside of Providence 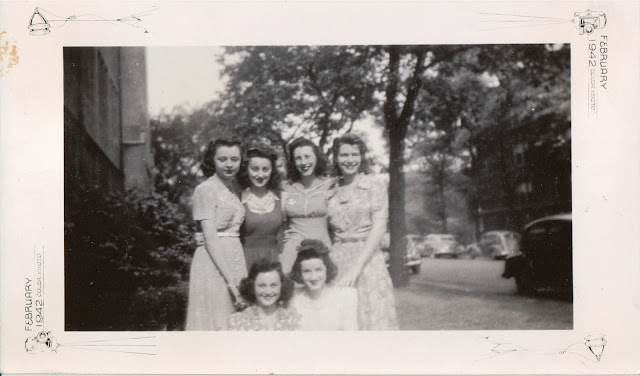 The photo says February 1942, but this is not February in Chicago!  Gloria Kennelly, back row, center right. 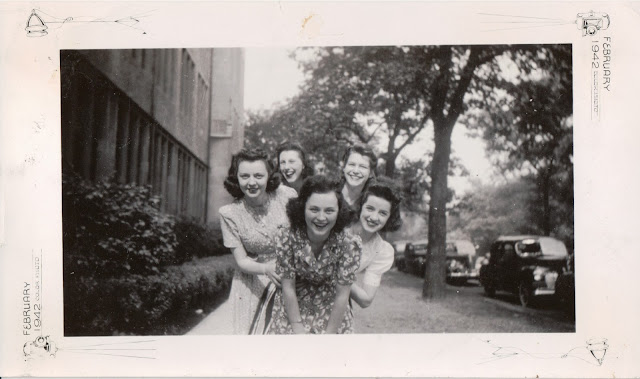 Gloria Kennelly back row left.  Can you help me identify her friends?

Will I ever be able to identify them . .  or even a few of them?  In 1969, Providence merged with the all male St. Mel's becoming a co-ed school.The current school - Providence-St. Mel's is located in the original Providence building.  I called the school and inquired about their records.  They directed me to the alumni association, but it turns out that this is considered a "lost" period due to water damaged records.  They also suggested that I might try the Sisters of Providence, but I am not exactly sure how to do that. Did they have yearbooks? . . . I haven't found any yet, but I have a search saved to ebay just in case.  I do have a copy of the commencement program with the name of each graduate, but that doesn't match them to the girls in my photos.  I think the Beatles have the perfect song for this:

HELP
Help, I need somebody.

Update! A 1940 yearbook has been found, and I have identified many of the girls - to the best of my ability.  Read my latest post to see the yearbook photos alongside the faces of the girls above.  With many thanks to Tony!
Posted by Margel at 12:44 PM