Reunite These Soldiers With Their Families

Tom Brokaw called it "The Greatest Generation"  in his book about the generation that grew up during the Great Depression, and then as young men they fought for freedom during World War II with many dying far away from home in foreign lands.   This was the generation of my mother, Gloria Kennelly who graduated from Chicago's Providence high school in 1942.  Most of the young men were either in uniform or soon would be.  Young men and women of this age became friends and sweethearts quickly offering  promises to write hoping it would keep them connected to the lives they left.  They exchanged pictures . . . a visual rememberance of home while they prayed friends at home would remember them.

At the very back of  my mother's photograph album were several pages of photos of a few of these young men in uniform.  Some have names, some do not.  I have tried a few Ancestry searches in an attempt to locate remaining family members and have sent emails to individuals that listed men of the  same name and about the correct age.  So far, no responses.

So today, I want to share them with you.  Let's remember these heroes who left home and family when our country called.  I hope they made it back home safely . . . realistically, some did not. 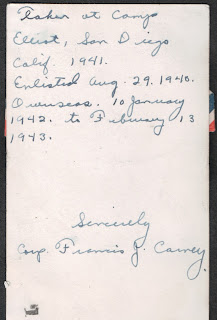 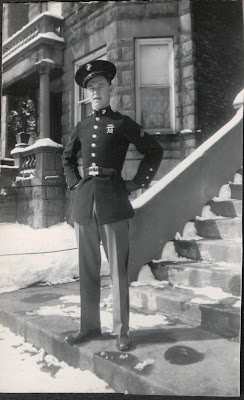 I believe that this photo on the right is also of Francis J. Carney, and it was taken outside of my mother's home on Monroe St. in Chicago's Garfield Park neighborhood. Was he from her church, a neighborhood boy, or a young man she knew socially?  I'll never know. There is no name on the back so I have made this assumption of his identity by comparing their faces - enlarged through the wonder of digital editing software. 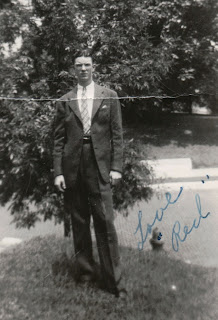 Robert S. Garthwaite, USN
There are several photos of Robert S. Garthwaite in my mother's album, usually they were just signed, "Red".  Did he have red hair, a ruddy complexion, or was there another reason for the nickname?  The black and white photos don't give us a clue, but in my mind's eye, he has red hair.  Luckily, one photo had his name on the back.

Paul Waywood
On the back of the photo, in my mother's handwriting, it says "Here's a picture of that Paul Waywood that I sent the Christmas box to."  There is no other information about him - no clue as to his military designation, rank or location.


There is absolutely no information about James Blazek other than his name.  How did my mother know him?

Which brother is this?
John J. Tyrrell or Thomas Tyrrell 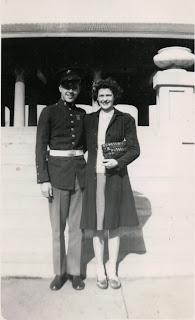 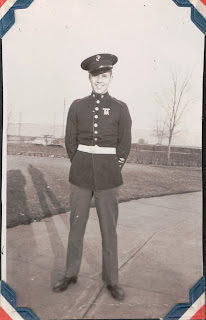 I have several photos of this young man and none of them identify him.  However in several of the photos, he is with my mother's best friend, Marilyne Tyrrell.  He and Marilyne look so much alike with identical smiles, it must be her brother.  But Marilyne had two brothers, John was four years older and Thomas was two.  Which brother is this?  One photo has a date of Feb. 1943 . . . but that was when it was developed, not taken.  You see,  1st Lt. John Tyrrell was killed in action January 9, 1943 at Guadalcanal. I don't know when he enlisted. Thomas enlisted in 1940, but mercifully survived the war. 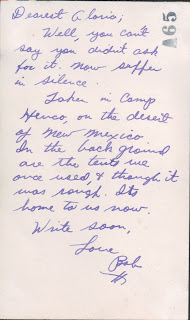 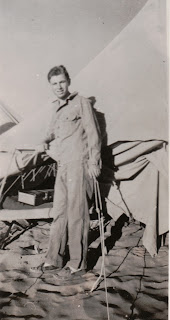 With nothing but "Bob" to go by, I am afraid that he will remain forever unidentified.  Despite that, I wanted to include his photo and words in this post. "Dearest Gloria,  Well, you can't say you didn't ask for it.  Now suffer in silence.  Taken in Camp Henco, on the desert of New Mexico.  In the background are the tents we once used and though it was rough. It's home to us now.  Write soon,  Love, Bob

Philip Carpenter
a co-worker at the Herald American

These are the soldiers whose faces stare at me from my mother's album.  It is a reflection of the times she lived through.  While this may be a futile post, I feel better for this small remembrance of their service to our country.

If you can reunite any of these photographs with their families, I would love it.