The Potential of Ebay

There is good news and bad news.  I have "saved searches" on eBay just in case something related to my ancestors might come up.  It hasn't been working the way I envisioned when I saved them originally. My fantasy  dream is that an old photo, family bible, or document relating to the civil war service of an ancestor will be up for sale.  Nothing so exciting or rare as surfaced yet.  I get daily messages about items that  have me baffled as to how they could even relate to my saved search terms, but . . . I left them because every now and then something pops up that is related despite the usual too high for my budget cost.  I have passed on a sterling spoon with an engraving of Mt. St. Clare school in the bowl because almost $50 seemed like way too much.  It has been re-listed several times and is currently still for sale.  I did bid on and win a postcard of Frankfort High School, and I have a family photo, generously shared by my cousin, of my grandfather with his high school football team standing on the front steps. I loved seeing the rest of the building.  It was only $8 so this was an easy decision.  Recently, however, a celluloid pin with a photo of the Kansas State Agricultural College (later Kansas State) football team of 1905.  As I zoomed in, I could see my grandfather, Carroll Walker, sitting in the front row.  Now this I had to have!  Since I never follow sports, I had no idea that Kansas State had such a good football team this year. I am sure that influenced the bidding.  I placed a bid for what I thought was the astronomical sum of $20.Instantly I was outbid.  I paused, and just watched it for the next few days until it was about to end when I took a deep breath and bid another $5.  Instantly outbid again.  Oh well, it was not to be.  Do you know what little pin, smaller than 2 inches in diameter, finally sold for?  $73 plus shipping! 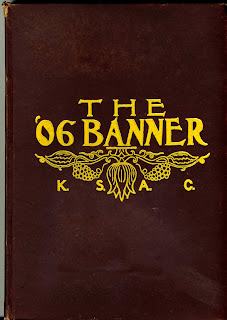 I was patting myself on the back for keeping a clear head, when a 1906 Kansas State Agricultural College yearbook pops up.  Oh no, I had never seen one this early so again I placed a bid. Really, I'm the high bidder??  Now, I wanted it badly.  The high bid did not move until the day before it ended.  I had been outbid.  Sadness descended, but the next night as it was an hour from ending, I placed another bid . . . outbid . . . I added a few more dollars . . . outbid.  With a minute left, I decided on a final bid.  I would go no higher since I was already over my initial limit, and with that keystroke became the new and final high bidder!  Other slightly later KSAC yearbooks were selling for $90 on eBay . . . I did not pay that much but unless you go to eBay and look it up, I will keep secret my final bid.


The book is fascinating and one of the most interesting photo is the one of the yearbook staff.  The annual is in wonderful condition, with no writing or missing pages.  I treasure it.  Of course, my favorite page is the one with my grandfather sitting in the front row with the football team. But . . .now I need the 1907 version when he was a senior!
I encourage you to take a chance on eBay,  just don't get carried away by it. Even with a "saved search" it takes patience to weed through all of the junk, but it is easier.  I am still waiting for a 1942 Providence High School (Chicago) yearbook to show up. . . someday.  If you have an ancestor who was a student at KSAC during 1906, let me know, and I will gladly send you a scan of any page you want.

A few days later, I discovered that complete scanned copies of Kansas State yearbooks are online at:  http://digicoll.lib.k-state.edu/cdm/landingpage/collection/yrbk
Posted by Margel at 2:33 PM