Once more I am writing about a man I am not related to, but this time I am related to his descendant.  Mordecai Perry is the 2x great grandfather of my brother.  As I have mentioned before, my brother, Dahl, is the original genealogist in the family and tried for years to interest me in the family history, now he tries to get me to talk about anything else. 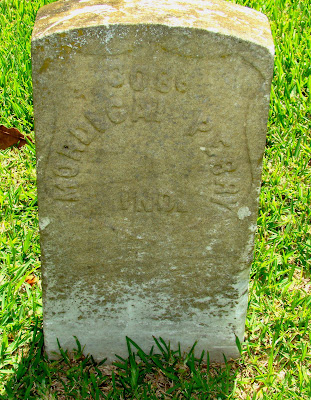 Mordecai Perry was born in North Carolina 1831.  He married Harriet Halsey in Gates County, North Carolina the twenty-first of April 1852.  This was a marriage of two young people from southern families . . .  yet in the 1860 census they are living in Tipton county, Indiana. Only two years later, Mordecai becomes a Union soldier.

According to Hazzard's History of Henry County, Indiana, 1822-1906, Volume 1,  page 304, Mordecai Perry mustered in as a private in the 16th Infantry Regiment Indiana Volunteers, Company G, on August 12, 1862.  This was a three year enlistment, but he never finished it.   There was no slow start for Mordecai. The sixteenth Indiana was sent to Kentucky on August 19, only a week later, where they took part in the Battle of Richmond.  The Regiment lost 200 men killed and wounded along with 600 prisoners.  Then on to the Vicksburg Campaign.  How can you prepare a man for battle in only a week? Or did they just assume they would lose so many that it would be a wasted effort? 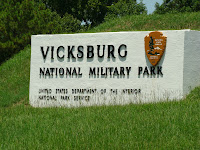 Mordecai died of dysentery at Vicksburg, Mississippi  February 13, 1863, a short 6 months after his enlistment.  He is buried there, part of the Vicksburg National Military Park.

What called him to enlist?  Did he need money for his family? Was he swept away by the emotion of the times?  Did he have family back in North Carolina who fought for the Confederacy?

His family remains a mystery . . . a brick wall that continues to block, aggravate and  frustrate my brother.  There are a lot of Perrys in North Carolina, but identifying the correct one has been elusive.