Thomas Gilshannon's Will . . . A Widow's Plight


Summer is coming to an end for me.  School starts tomorrow, and, as usual, I didn't accomplish everything on my "to do" list, but it has been a wonderful summer with a successful research trip, an unexpected discovery of a cache of old photos and videos, a pleasant road trip with my husband, a few cleaning/organizing projects completed, and I still had time to knit!  It has been a most relaxing summer.

So what is left of interest in Thomas Gilshannon's will other than a bunch of bills.  Well, I found a few items of interest.  Let's look first at his obituary.  His obituary tells me that he had tuberculosis . . . for seventeen years!  I didn't know you could survive it for that length of time in 1888.


Thomas' will was written five years before his death and only a year after his daughter, Nancy, also succumbed to the dreaded consumption.  He could see the end, and wanted to get his affairs in order. His choice of executor was not a deathbed decision.  Like Thomas, his wife Bridget did not read or write and would need someone to look after her interests after he was gone. There were still children at home to consider. Did G. A. Griswold do that?  You decide.

While G.A. Griswold paid everyone else, Bridget had to petition the court 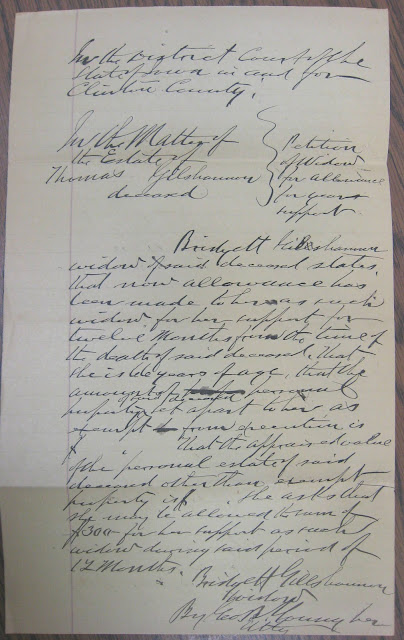 In the District court of the State of Iowa in and for Clinton county.

In the matter of the estate
of Thomas Gilshannon
deceased

Petition of the Widow for
allowance for 1 years support

By Geo B. Young, her atty 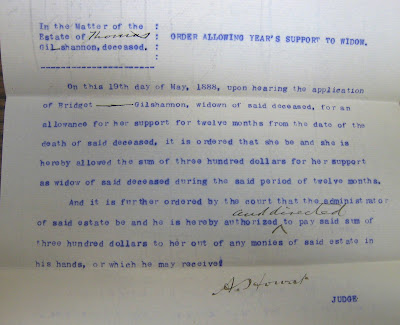 The judge ordered it. 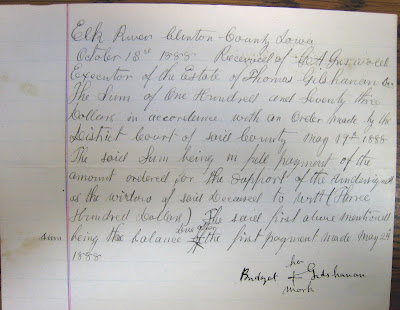 The executor complied . . . with payments 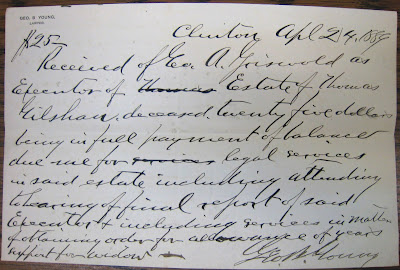 The lawyer's bill was $25
Note:  Thank goodness his name was printed in the upper left corner of the bill because I certainly couldn't read it.

I investigated, briefly, the identity of the executor of his will, and from what I can tell he was a farmer who had a nearby farm and I assume a trusted friend of the Gilshannons, but why wasn't a family member chosen?  So far,  I have not found a family relationship with G.A. Griswold.  What was the incentive for someone outside a family to agree to be an executor? Money? Friendship? Obligation?   There was a bill for $25.00 "commissions", and I assume this was what he was paid for carrying out the duties of the executor. So. . . when all the bills and fees were paid and everything was settled, what monies were left for the widow and children? 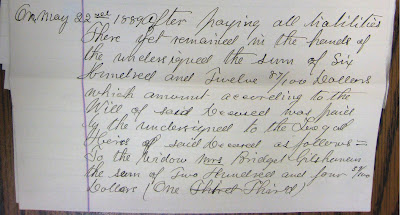 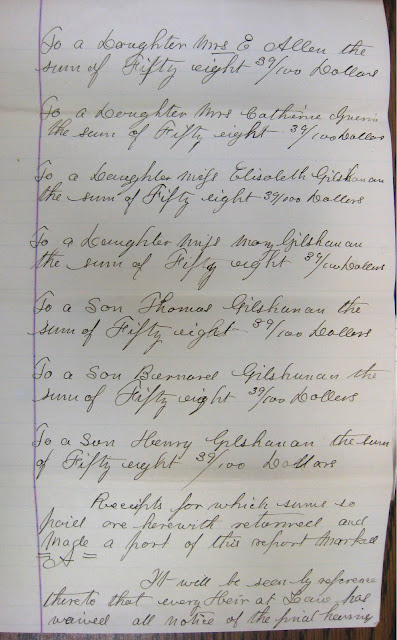 As you can see a probate record contains more than just a wil,l and these "extras" give you the story behind the will and can often lead your research in new directions.  One bill in this probate record referenced a lawsuit between Thomas and a man named Struve complete with the date.  That will go on my list for next year's research trip.  The bills may paint a picture of the life of the deceased, along with the time period they lived in.

Don't just settle for a will, dig deeper and search for the entire probate record.  Surprises await. . .

Postscript:  My research trip to Clinton would not have been as successful without the help of my Clinton angel, Mary.  She gave me addresses, hours of operation, local maps with ancestor addresses highlighted, location of various records, went to museums and historical centers to check out their holdings, and so much more.   If I try to list it all, I will forget something.  She was the reason I was able to accomplish so much.