I think I am starting to emerge from the haze of an unexpected family history overdose.

Last week was "closet cleaning week".  I always have a list of cleaning projects that I intend to finish over my summer before school starts in the Fall. No comments from my brother!  I had finished the hall storage closet, and my bedroom closest was next on the list.  My clothes are swapped, stored, and sorted each season, but the floor had a pile of random "stuff" and my top shelf held who knows what.  It had been years. . . many years. . . since I had pulled down the recycled cardboard boxes assuming that they held the usual assortment of mementos from my children's youth . . . drawings, projects, report cards, and Halloween costumes.  I was feeling particularly smug because I was finishing earlier than usual.  Most years I put off these projects until the week before school starts and then frantically try to "accomplish something" before returning to school.

The first two boxes held the expected, and after sorting, and re-boxing, I lifted down the final box expecting to finish the job quickly and pack them away in the attic. But when I opened it, I was glad I was sitting down  because music started playing and a bright light emanated from the contents  this is what I found . . . OMG, Holy ?#%, Momma Mia, what the? 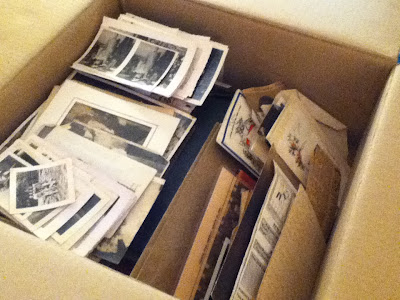 My actual reaction was a gasp and stunned silence!  After a few moments of just staring at the contents, I started lifting up and looking through the top photos, I realized then that there were albums at the bottom.  How did I not know this was in my closet for the last five years while I have been consumed with the family history and totally ga ga over old photos??  I spent the next 3 hours looking through the box, and at the end my face hurt from smiling. The photos were 1940's and earlier.  Also included were many large format (from 2x2 to postcard size) single image black and white negatives.

This was overwhelming. I found teen photos of my mother and her brother, fun pictures of my grandparents, the earliest photo I had ever seen of my great grandmother (about 1890), and multiple pictures of my father including my parent's wedding day. It also presented some new questions.  Not a single photo had names on the back.  I have no idea who many of the individuals are, and some of them are obviously family.  It was definitely more than I could scan in an afternoon, but I wanted to share at least a bit of what I found with family. . . at least those that love the family history.  My daughter's reaction was still "un huh", and "yeh, nice", accompanied by an eye roll when I forced her to look at them. It was hard to choose, but I selected a few, scanned them, uploaded to Flickr, and began to write numerous emails to my family historians to let them know.  I like Flickr because it allows each person to download just the photos they want in the size they want.  It is easier for me than sending attachments in multiple emails.
Just as a sample
If you know where I can locate a 1942 yearbook for Providence, I would love to identify these girls!

I am sure this is in Chicago.  Can you identify the location?

If you are a family member and can identify the girl on the right, PLEASE contact me!

And sadly. . .
The family photo scratcher strikes again! - Can this be fixed?

Lastly, the box contained three rolls of sound Super 8 film I had taken of my children 30+ years ago.  The cells were so tiny that, even holding them to the light, I couldn't tell what the years or events were.  That sent me on a multi-day search for a business that could transfer them to DVD.  The dilemma was that I did not want to send them away.  I didn't want them thrown in a bag with 50 other orders and then on a truck with 500 other orders.  These were irreplaceable. I wanted someone who could do it locally.  I called everywhere and visited multiple locations that thought they could do it, but needed to actually see the film.  The fly in the ointment was that they are sound recordings and everyone offered to do it without the sound . . .  Really, why would I want that??  Finally, when I was very discouraged, I found Band Wagon Video and left a message on the answering machine since it was after hours.  The next day I spoke with the owner and TA DA! he could do it sound and all.  Amazingly, he was less expensive than anyone else.  This was a bonus, and I made an appointment to take my videos over that afternoon. That sent me on a search for the other videos I knew I had "safely tucked away" somewhere.  In fact I had 22 more rolls which I mentioned at our meeting.  He offered to lend me a video editor, at no charge, so I could put my videos in time period order and to do four of them so I could be confident of the quality before I committed. The next day I spent going through the additional 22 rolls. My discovery was stretching out into days and days of related activities.

BTW. . . Only yesterday did I finish my closet and finally put the boxes in the attic.  And. . . sandwiched in and around all of this was planning for my yearly research trip to Clinton, Iowa.  Whew!
Posted by Margel at 9:11 AM