Which is Which?. . . More Photos From the Album

Now. . . to continue with the project I have started, which is the unidentified photos from the album.  You don't know how hard it is for me to not get sidetracked.  I have been corresponding with a new cousin who found my tree on Ancestry.com and so my thoughts have been flying all over the place.

But I will store those ideas and try to bring my mind back to the album and the photos which I have always hoped to reconnect with the names.  I think that the project seems so big and so difficult that I wonder if I am up to the task.  That is why I decided to blog about it.  Blogging forces me to organize my thoughts and lay out the pertinent details so I can see them.  Like today, I have spent the entire afternoon trying to put together the background information for this post.  That research has resulted in partial answers.


Now I am asking you to help, correct or suggest where I should go from here. 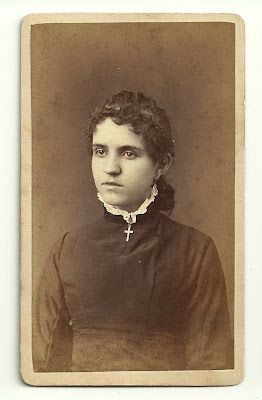 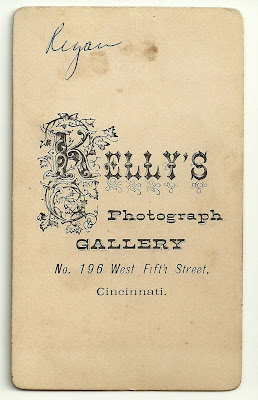 In a past post I mentioned the Reagan girls. On the album pages the names written include "Beany" Regan and Mollie Regan.  However on the back of two loose photos is only written "Regan".  The back side of the photos do give me information about the photographer, and it was the tracking of the photographer that took much of my time today. 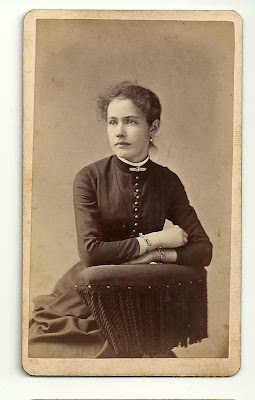 My stumbling, bumbling, haphazard internet searches painstaking research discovered that Kelly's photography business was only in existence in Cincinnati from 1876 - 1880.  At some point my Google searches turned up a promising record in the the Cincinnati city directories on Fold3.  For some reason I always forget to check Fold3, and they have a great collection of city directories.  I love city directories because they let you track, in this case businesses, year by year.  By changing the years and changing the names from Kelly to Brownell, I was able to narrow down the time period.  The 1880 city directory shows James Kelly operating a "Photograph and Ferreotype Gallery" at 196 W. 5th  which is the same as the back of the card.  That same year C.A. Brownell, photographer, is located at 403 W. 3rd.

Next I checked the 1881 city directory and discovered that C.A. Brownell was doing business at the 196 W. 5th street address.  Not only that but the directory does not list James Kelly at all.  Did he sell, die or move?  Since it was not relevant to my issue I merely wondered and moved on.
My task now was to discover when Kelly began his photographic gallery at 196 W. 5th.  I started going backwards, 1879. . 1878. . .1877. . .1876 . . .1875 - whoops, no Kelly.  The earliest listing appeared in the  1876 city directory,
My reasoning is that Brownell's would not have included the information that the photographic gallery was formerly Kelly's for more than 2 years. . . possibly less.  So that should date the second photo to 1881-1882.  The top photo has to be between 1876 and 1880 because he was only in business at the address listed between those dates.

Now to pin down the ages of the Regan girls who were the daughters of Mary O'Callahan Regan and her husband Michael Reagan.  Mary was the sister of my gg grandmother, Bridget O'Callahan McDonnell.  Using several census records along with the written note I mentioned in this blog post, I have figured out their correct names and tentatively a birth year for each.  Unknown to me before today, I have learned that Mollie is a nickname for Mary and the census show her birth year  to be 1861.  Bridget was born in 1862 and the Albie listed in the note turned out to be Abigail, also called Abbey in the 1870 census, who was born in 1867.

I know from the album that one is Mollie, but who is the other sister - Abigail or Bridget?

Abigail would be only 13 at most in the top photo and the girl does look young and not . . . not fully developed.  If it is Abigail in the second photo, she would be 14 or 15.  The girl looks young but I don't think she that young?

Let's now look at Bridget.  In the top photo, Bridget would be at most 18 but at the least 14.  It's a possibility if this photo was taken in 1876 rather than 1880.  Is it possible to tell?  In the bottom photo, Bridget would be 19 or 20 and the age looks about right, but don't forget her sister Mollie is only a year older than her.

I think the bottom one is Mollie since it was on the page in the album opposite her husband.  I don't think they would have put a photo of her as a child opposite her husband's photo, but this is just an assumption on my part. I also enlarged the photograph and it looks like she has a ring on her right hand - a reversal perhaps?

If my assumptions are correct, that means the top photograph is either Bridget or Abigail.  Any ideas?
Posted by Margel at 6:25 PM