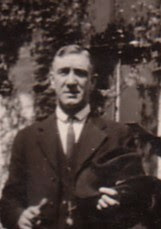 I'm taking a brief break from the photo album, because I was going through some files to send to a cousin when I noticed something unusual about the death certificate of my great grandfather, Edward P. Kennelly who lived at 2338 W. Washington Blvd and who stands proudly behind his children in my first blog post.

I have mentioned that on their wedding certificate my great grandparents were listed as the same age, but as their death certificates, and several census records show, Grandma Kennelly was really 10 years older than her husband.  Edward worked as a meat salesman at the Fulton St. Market - a commission man Grandma Kennelly called him. 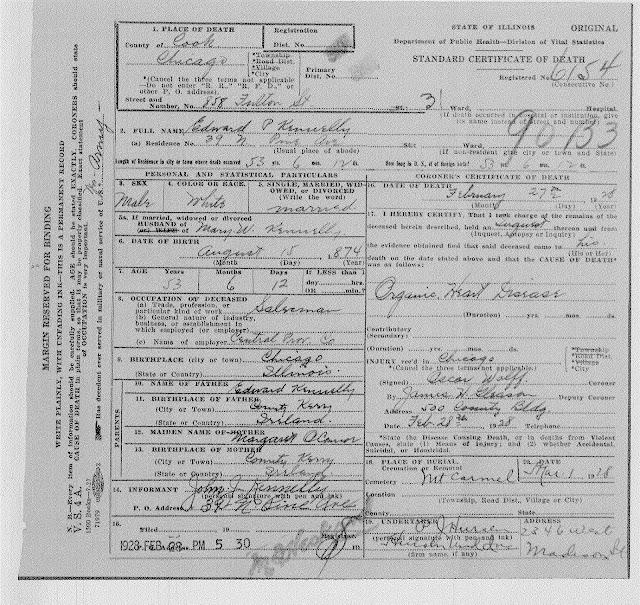 As I quickly re-read the death certificate, before  intending to attach it to an email, something seemed odd so I read it again, but this time more slowly. The death certificate states that he died of "organic heart disease" on February 27, 1928, and his death occurred at  858 Fulton St., in Chicago's 3rd ward.  Is that the location of Fulton Market?  I assume that meant he had a heart attack. . . at work?  As I had remembered, it lists his father as Edward Kennelly from County Kerry, Ireland and his mother as Margaret O'Connor, also from County Kerry.   But, wait a minute . . .where is the 2338 W. Washington St. address???   The fact that his son, John was the informant was not unexpected, but it lists Edward's "usual place of abode" as 29 N. Pine Ave., and that is the same address listed for his son John.  He was living with his son, John when he died?

Maybe they purchased the house after his death, you say.  Oh, but the 1923 Chicago city directory lists his address as 2328 W. Washington, however, his son John is listed as living at 2338 W. Washington so his father's similar, but not quite correct address, is a typo.  What happened between 1923 and 1928 to make him move in with his son?  OR . . . was John so distraught at his father's sudden and unexpected death at age 53 that he gave them his own address by mistake?  I have NEVER heard any family gossip about Grandpa Kennelly moving out.  He still had teenagers at home who needed him.  When was the last city directory printed?   If there was one as late as 1927, maybe I could check his address on that?

Lastly, why would there have been an inquest, and  is it possible for me to get a copy of the inquest file?  With all of the family birth and death certificates with the 2338 address, it is a bit sad that it isn't on Grandpa Kennelly's.