Another Photo from the Family Album . . . Opinions Please! 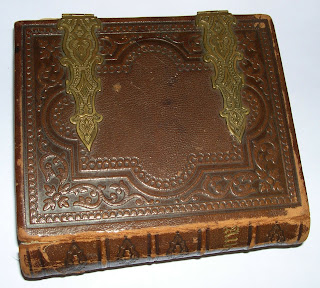 Well, I should have put this photo of the album in with the first post I made about the unidentified photos that were stuck in it.  I have never made any claims to be organized, and this is further proof that I am not.  I have nothing but a gut feeling to tell me it is 1880's or 1890's vintage.  Cousin June sent me a list of the names that were written on the pages, but why in the world they would have removed the pictures in the first place is beyond my comprehension.  I console myself with the knowledge that at least they kept them in the album. The problem is that they don't all match up, so either there were other photos that are missing, or they slipped in a few that weren't original to the album.  I think I have a lead on the photo from my previous posting.  When I looked at the list of names again, I found that there is only one couple listed . . . Lane McCarty's parents.  And if I read her email correctly, the name Mollie was also on the same page.  This seemed to suggest that there should be two photos on this page, but when I searched high and low through my messy files located the list of Bridget O'Callahan's siblings, I discovered the name Lane McCarty as one more generation was squeezed into the list. His parents? Mollie Reagan and Thomas McCarty (McCarthy).  Now my mission is to locate some records for them and see if the time period  and location matches.  I will let you know.

Today, I want to share the photo that I forgot to take to the NGS conference with me.  It is also a tintype and I have poured over it, enlarged it, compared it to other photos and wondered about the wild, colorful neck bow.  I know the photo is in black and white, but I can see the color . . . can't you? From the dropped sleeve and full skirt, I estimate it is about 1850's or1860's. Someone wiser that me could pinpoint the clothing more closely.  The bow seems unusual, but maybe she was just a girl who liked a little flash.  She is wearing a ring on her right hand. . . or is this in reverse, and it's really on her left?  Could it be a wedding ring?  If I am correct then the time period fits, but I want need your opinion. After all you can't base an identification on a time period alone, and wishing it were true won't make it so.  I ask you, is this a young version of the woman below??


The woman below is Bridget O'Callahan, my gg grandmother. 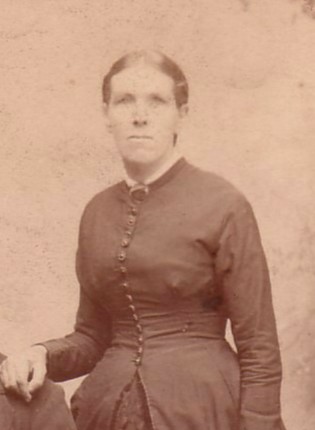