And Now Back to the Photograph Album . . .

In my previous post, Which is Which, I determined that the photograph on the left is Mollie Reagan, the oldest daughter of Michael Regan and Mary O'Callahan, sister of my gg-grandmother, Bridget O'Callahan.  To determine this, I used the names that were written on the empty album pages, the last name written on the back of the photograph and information about the dates the photographer was doing business in Cincinnati.  I am still undecided as to which sister is in the other photo.

I am taking the easy way here for my next one.  In the album, on the page opposite Mollie was written: Tom McCarthy ( aka McCarty).  Sorting through the photos, I find one of a young man that when I look at the back is identified as Leon McCarthy's father.  As I searched through the list of Bridget O'Callahan's sisters, brothers, spouses and families,  I have not been able to find a Leon McCarthy, but there IS a record of a Lane McCarty as the son of Mary and Thomas McCarty. Since I have discovered that one sister, Abigail, was not Albie as listed but rather Abbie, I am guessing that the names written on the pages were written later and might be "off" a bit.  Lane seems to be the most likely choice in this case.  The census records from 1900 and 1910 confirm that the family did not have a child named Leon.  So now this "Leon McCarthy's father" becomes, more accurately, Thomas McCarty husband of Mary (Mollie) Regan. 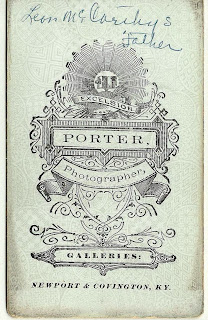 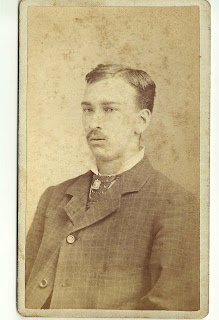 Thomas McCarty was from Covington, Kentucky which is right across the river from Cincinnati.  The photographer is a Covington photographer, but I did not need to track this photographer since I had enough information to identify the photo with that.

I do have one question about Thomas' photo. . .  what is that pin he is wearing on his tie?  It shows up on two different men in the album photos.  A fraternal organization perhaps??? 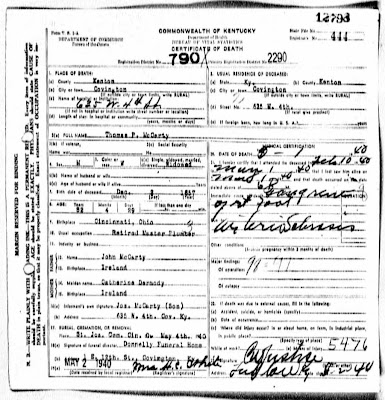 According to his death certificate, Thomas, son of Irish immigrants John McCarty and Catherine Dermody, was a master plummer and died in 1940 at the age of 82, a widower.

I am working on the easy ones first so that I can narrow down the list of the "I have absolutely no idea ." individuals.  Of course, I am also hoping that descendants of the identified photos will find my post, and they will have information/photos that we can cross check . . . Hello, anyone out there?