At The End of the Trail

My search for the original Margel has now come to a conclusion.  I first mentioned Margel as a collateral person in my search for my aunt in A Tale of Two Margels, but my interest in her only simmered until I read the newspaper account of the graduation events at Mount St. Clare school in May of 1918. There listed right next to my grandmother, Berenice Moldt, was her best friend, Margel B. Wells. Knowing her surname fanned my interest again until . . . I reached another roadblock.  In "Sidetracked" I documented my efforts and asked, "Where do I go from here?"

While I haven't blogged about it, behind the scenes the search continued . . . my last record of Margel B. Wells had her living in Jackson, Michigan with her husband James Mosher. Did she die? Divorce? Certainly she disappeared.

I called the local historical society in Jackson to see if they had any records for her death, but no luck. A search for  Margel Mosher on Ancestry and Family Search had nothing beyond the 1920 census.   And . . . if she divorced and remarried, how would I ever find out her married name? It felt like a brick wall. 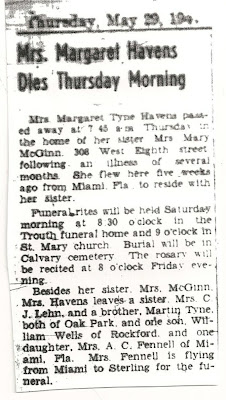 Once again, Mary,a  researcher extraordinaire, took up the cause.  She not only looked for Margel in her local Clinton county records, but researched her family as well.  I found my mailbox full of information about the Tyne's and Wells, Margel's grandparents.  It turns out this was the key to locating Margel. Then on a sunny day this past Spring she drove from her home in Clinton to the library in Sterling Falls, Illinois, the home of Margel's parents.  In the genealogy department of this beautiful library with interior pillars and a geometrically shaped dome, Mary told the librarian she was searching for information on the Tyne family.  While I am condensing the information Mary sent to me, I do not want you to think it was effortless.  It was good detective instincts with hours of research for which I am very appreciative.  While all of the information about the Tyne family was interesting, the crucial piece that unraveled the mystery was the obituary of Margel's mother, Maggie Wells Havens.  It seems that Margel's mother had remarried George Havens after the death of her husband, BUT in her obituary it mentions that her daughter, Mrs. A.C. Fennell of Miami Florida would be flying in for the funeral. Aha! Margel had remarried.  Without this obit which was only available locally, I would never have found out Margel's married name, and what could have been a brick wall turned out to only be a roadblock.


My next step was to confirm that A.C. Fennell had a wife with the first name of Margel and the 1930 census confirms that.

While it confirms Margel B. was married to Alvah Fennell, a dentist, it is interesting that it also states she had a college degree and married for the first time at age 25 with her current age as 27.  Now you and I both know that her first marriage was at 19 and she wasn't a widow.  Another curious coincidence was that in the 1920 census Alvah was living in Jackson, Michigan with his parents. Regardless, I was elated that she had not died.

So what else did I learn about Margel? Let's look at the records I found. A 1941 city directory shows her living on the corner of Sunset Dr. and Kendall Rd. in South Miami.

The 1945 Florida State Census has Margel and Alvah with two daughters, Sandra Jane and Marcia (?) Ann.

Then in 1952 Margel and Alvah divorced.  There was no information, just a document listing the names of  Florida couples who had decided they could not continue life as a couple. Alvah and Margel's children were still pre-teens.
After looking for an online death record and coming up empty handed, I turned, as I often do, to the genealogy department of the local library.  In this case it was the Miami-Dade Public Library.  I sent an email inquiry, and just as promptly received a reply. In fact their index did show an obituary for Margel B. Fennell, and for a modest sum they would do the search and send me the obituary.
FENNELL
Mrs. Margel B., 68, of 4217 Anne Ct., Coconut Grove, passed away Thurs. Came here in 1918 from Sterling, Ill.  She was active in numerous charitable organizations in Dade County (especially Variety Children's Hospital) and also Blowing rock, N.C.  Survived by 2 daughters Mrs Sandra Jane McClurg and Mrs Nicholas G. Polizzi and 3 grandchildren all of Miami. Rosary services 7:30 P.M. Fri. PHILBRICK & SON CORAL GABLES FUNERAL HOME, 837 Ponce de Leon blvd., with requiem mass 9:30 A.M. Sat. Epiphany Catholic Church, Interment in Miami Memorial Park. Friends may call from 2 to 9 P.M. Fri.
While there are some questions, like her disappearing first husband, I am content with the discoveries I have found.  I remember as a child curiously asking my grandmother to tell me about her friend.  I don't remember much, but I remembered that her middle name was Bridget so when I read that her grandmother was named Bridget, I knew my memories were correct.  It was interesting that she always used her middle initial but never her middle name.
At the recent NGS conference in Cincinnati a recurring theme in many lectures was the need to investigate and reassemble the community of our ancestors, their friends, associates, and neighbors to break our brick walls.  Elizabeth Shown Mills coined the term FAN. In the same way, your research methods must be multi-pronged. My search for Margel would have remained an unfulfilled wish without Mary and the generous amount of time she put in on this search.  As it often does, a local library held the clues that were pivotal to our success. I love libraries!  Online sources are obvious.

For many years, my grandparents, went to Florida for two months during our mid-western winters. One year they even took my brother and I with them to Clearwater.  But at least one of those years they traveled to Miami.  Travel was a dress up event in the 1950's as you can tell from the photo at the right.  I don't remember the hat my grandmother is wearing in the photo, but that fur cape hung in my mother's closet long after my grandmother died. Do you suppose my grandmother knew her childhood friend, Margel, lived in Miami?  Did they visited with her?  I don't know where they are going for sure, but it seems like a fitting photo to go with this post . . . waving goodbye.


Postscript:  If you are a relative of Margel B. Wells Fennell, contact me as I have a plethora of information that I could not include here.


After post update:  It turns out that Alvah had also been married before in 1924, and his wife identifies herself as "divorced" in the 1930 census.