A Bad Boy Uncle is Discovered

In a previous blog post I told you how I used the information at the bottom of an indexed record on Ancestry.com as a springboard to find the original records.  Today, I will show you another example of my success using this information.

My father's family always presents challenges because of the common nature of their names.  My father is Robert Walker . . . see what I mean.  Because of this I often scroll through sibling names in the hope of finding  a name that is a bit more unusual so I can circle around and find the family that way.  I was searching for the name of my grandmother's maternal grandfather because I had been told he was a civil war soldier.  I had not had much luck, when I discovered that my grandmother's youngest brother was named Pierman McCoy. I knew there couldn't be too many of those.  I was not prepared for what I found.


My parent's divorced when I was about seven, and I never saw my father or anyone from that side of the family again while I was growing up.  The story my mother told was that my father came from a prominent family and she felt that my grandmother believed she was not "good enough" to marry my father.  Is that true or just my  mother's assumption?  Who knows, but the few memories I have of my grandmother are of a very stern woman. I think of her more kindly now as I peel away the layers of  her life.

I entered the name, Pierman McCoy into the Ancestry.com search hoping that he hadn't died as a child.  As I scrolled through the results, I paused, my mouth dropped open, and my eyes kept blinking as if I must be reading it wrong when I came to the record below:


I clicked to open up the record only to find an indexed record with his inmate number being the only additional information.  Wow, a true bad boy in the family.  How had they ever kept this secret?  But wait. . . could there be more than one Pierman McCoy?  Maybe Pierman was a popular name, and I just didn't realize it.  How could I be sure?


According to the Ancestry, information "In the early 1930s, prison officials began studying the personal history of inmates to determine placement in treatment programs."  The listing of personal information was astonishing and now I really wanted to see the original records. But could I? Are they public records?


"How to Obtain Copies of Original Files:
The original case files are located at the National Archive at Kansas City, arranged numerically by inmate number. Please make sure to include this number when requesting a copy of a file from the archive."


I instantly sent an email citing his prisoner number to see if it was possible for me to get his prison file and to make sure that this was "my Pierman".  Happily for me, because I am a terribly impatient person, Jessica Schmidt, the Archives Technician, at the Kansas City Central Plains Region of the National Archives wrote back almost immediately.  It was good news.  The privacy limitation had expired and I could request a copy for $18.  She offered to look up the file and send me some identifying information so I could be sure he was the correct Pierman. She sent me the name of his mother, and Mary matched my gr. grandmother's name but it wasn't definitive.  I decided to write the check anyway because. . . I just had to know.
When the over-sized envelope arrived, I found my great uncle, my grandmother's brother
As I read through each of the documents nothing linked him to my family until I found this telegram that he sent to his mother. 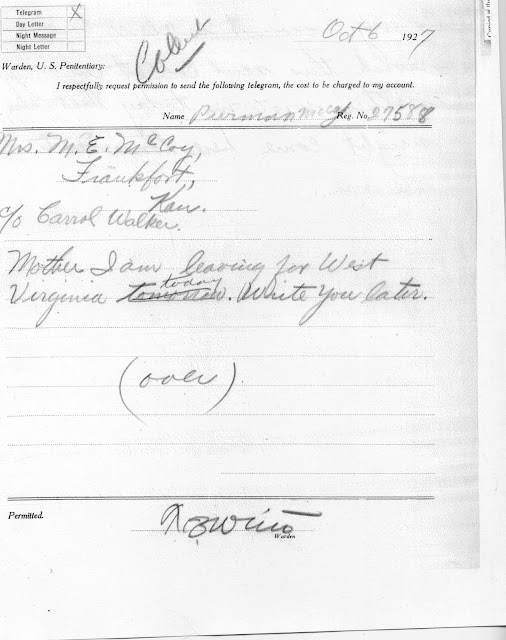 Now I have my proof.  It appears that my gr. grandmother was staying with my grandmother, her daughter at the time she received this telegram.  Carroll Walker is my grandfather.  As an attorney, I wonder how he felt about Pierman as a brother-in-law? Did he try to help him? My grandmother had four young children at home ages, 11,10,4, and 3.  This was not the first time her brother had caused trouble, and it also wasn't the last. How much did the children know? The only thing I am sure of is that my mother didn't know!

So read ALL of the information that Ancestry.com gives you. Use it as a springboard to find "the rest of the story".  As a family historian you are not measured by how many people are in your tree or how far back you can trace your family.  Can you tell me the story of your family?

Yesterday, I told you how I tracked Owen McDonnell's path to citizenship from his letter of first intent  in Wisconsin in 1855 to his naturalization in Iowa on Sept. 5, 1864.  Today, I want to share with you this amazing family document which is in the care and safekeeping of my double cousin, June - the original citizenship paper of Owen William McDonnell who came from Grenagh, Barony of Barretts, County Cork, Ireland. 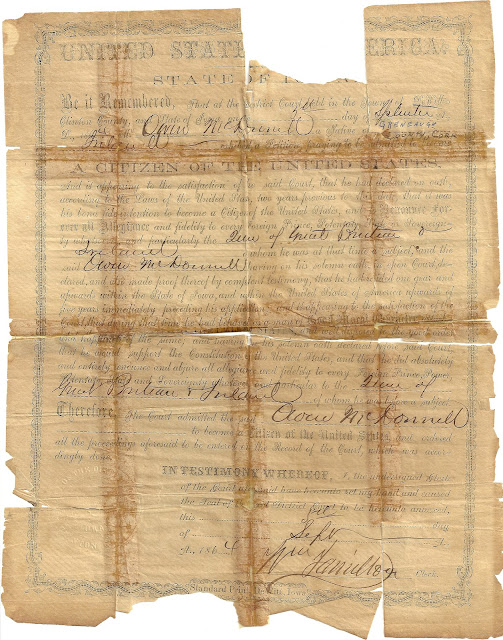 Think of Ancestry.com as a Springboard

One of the things I like about the show "Who Do You think You Are" is that they include a variety of other resources besides just Ancestry.com even if that means that the celebrity is chauffeured to the location and sits there waiting like a princess for the genealogist or archivist to present them with copies of documents.  Occasionally they get to handle and leaf through to a pre-tagged page.  But still it does shows a variety of repositories and that not everything is online. I realize that the filming of the episode may preclude this possibility, but it would be nice to see other family researchers  using the historical societies, town archives, and libraries they visit. I suppose a family historian yelling, "I found them!!" in the background might disrupt the solemn unrolling of  a hand lettered family tree done in perfect calligraphy. However, even the restaurants or cafes are usually empty. Genealogy is a growing all consuming passion hobby. . .  but wait, hobby seems too frivolous a word.  Anyway, I think they should show more people engaging in research in the background.
Now that I have that off my chest, let's get to the topic of this blog post.
Maybe some of you feel the same way I do and sigh in frustration when your Ancestry.com search results in transcribed documents or the barebones information from an index.  What do you do next? Do you just attach it to the person on your tree and go on. . .or . . . do you read all of the information in the fine print paragraphs at the bottom including "learn more"?  I read. . . and often the information at the bottom is the springboad that I need to locate the original document. Just recently I used this method to track down the  first intent papers of my gg-grandfather, Owen McDonnell of Clinton, Iowa. I have not been able to pin down the passenger ship or exact year he came to this country.  His obituary and his tombstone list two different years of birth and the census records vary as census records always do.  Did he immigrate with any of his brothers, Michael, John, and Bartholomew who also lived in Clinton or alone?

His brothers show up in Clinton county, Iowa in the 1860 census living together.  Michael is married and,according to the census, his daughter was born in Wisconsin.  I asked my friend and researcher extraordinaire, Mary  if she could find their naturalization papers in Clinton. Her search of Ancestry.com had produced typed naturalization cards for a Michael, John, and Owen McDonnell as well as the transcribed record below. 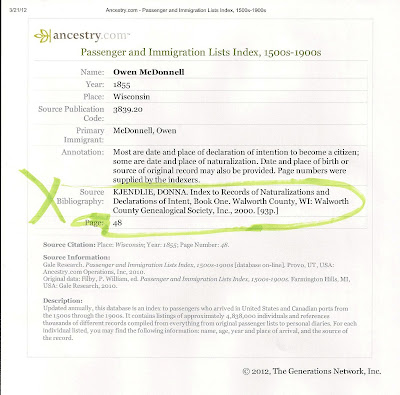 I found the same records earlier during one of my million searches of Ancestry, but did not connect the Owen from Clinton with the Owen from Wisconsin.  Mary went to the courthouse to see if she could get a copy of the original naturalization documents referenced.  This is what she found: 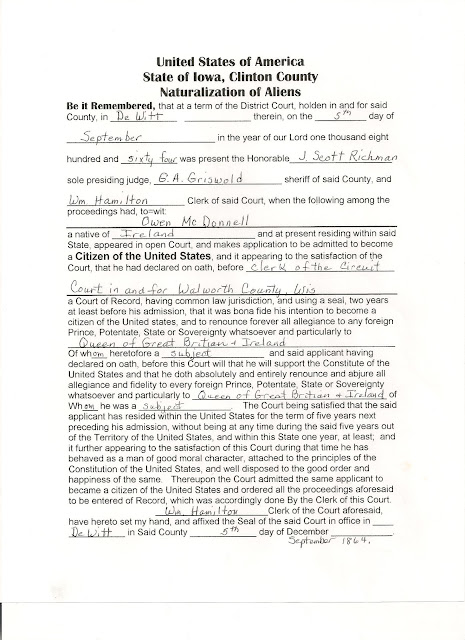 Shucks, there is only minimal information, but it looks like this connects the Owen from Clinton with the Ancestry.com record listed above since they both state there is a record in Walworth County, Wisconsin.  While the record above tells me the original record was filed with the Clerk of Court, the Ancestry.com record says it is currently in the possession of the Walworth County Historical Society and can be found in the "Records of Naturalizations and Declarations of Intent", book one, page 48.
Next, I open my laptop and do a search for Walworth County Wisconsin Historical Society. Success! They have a website and an email contact.  I quickly send an email to Deb Ketchum, hoping that she checked her email often - like hourly. I also found a library phone number and called leaving a message just in case the email wasn't checked. It turns out that she does check her email and listen to her phone messages.  That evening, I found a message on my phone from Deb.  We talked, and she told me that the records were now held by a local university, but that she would make a trip over to see if they had them.  She explained that the underfunded archives were kept in a basement and there had been leaks and other accidents in the past.  She also said that the letters of intent often had very little information and didn't want me to be disappointed.  Within a week I had the records in my hand . . . errr, I mean computer.
Owen's Letter of First Intent 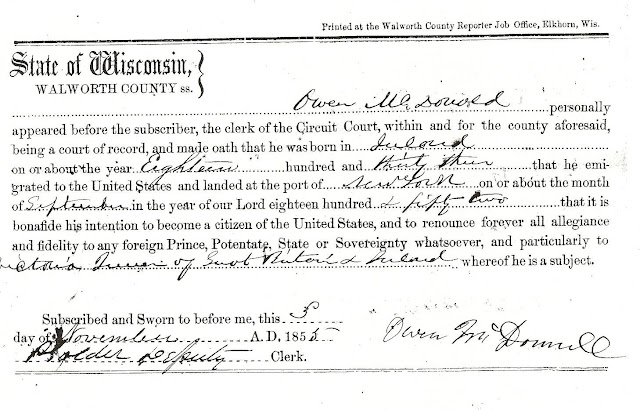 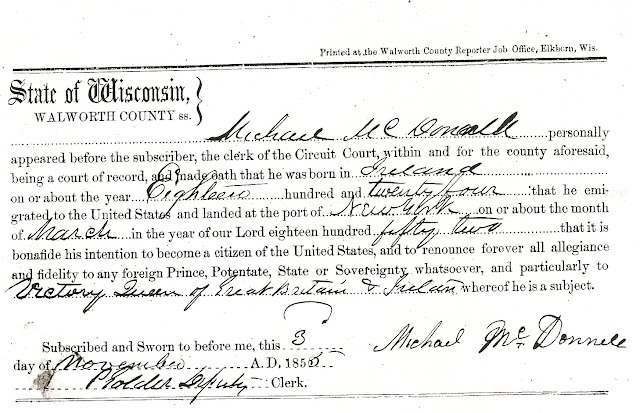 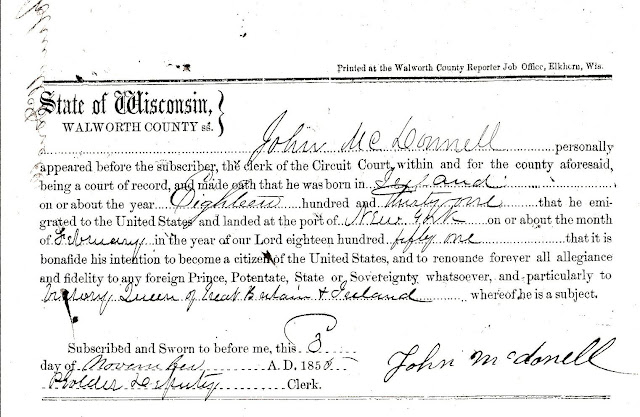 Lots of questions remain but Now what did I learn from these brief letters of intent:  The brothers did not immigrate together but each one came separately with my Owen coming last. They all gave their letters of intent the same day. I now know that 1833 is his correct birth year rather than the 1837 in one account.  I know that Owen was the last to come and that his immigration year was 1852 which varied in the census records. This means that the 1851 Irish census showing Owen McDonnell and Julia McDonnell is still a good possibility for mother and son. The month of his immigration was "about September".  Hopefully this will help me find his ship, but it hasn't so far.  They all signed their names rather than make a mark - a source of pride for me, and they all spelled it "MCDONNELL" despite the spelling of McDonald on Owen's.  Now what happened to Bartholomew?  I am still putting the pieces together for him.

In a future post, I will show you how the information at the bottom of an Ancestry.com record led to a "bad boy" uncle.
Posted by Margel at 4:25 PM No comments: