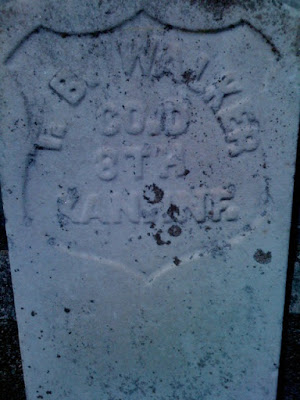 
Thomas Barrett Walker, Company D, Eighth Kansas Infantry died of measles at Iowa Point while waiting for the expected invasion from their southern border to begin.  He was born in Ohio in 1844 the oldest son of Isaac Walker and Winifred Barrett Walker. As a young boy he lived in Illinois and Iowa before he settled with his family on a farm in eastern Kansas on the banks of the Vermillion River. He was from a staunchly abolitionist family with a Quaker heritage.  Together, he and his father, enlisted in Company D, 8th Kansas Infantry in September 1861.  He died in December of the same year.  The brief story of his death at Iowa Point, Kansas was told in my post, "Isaac Walker Enlists in the Eighth Kansas Infantry".  He was originally buried in the cemetery in Barrett, Kansas named for his uncle A.G. Barrett, but was later moved to Frankfort where the rest of his family now rests.  Thomas is my g-g uncle, the brother of David Barrett Walker.

Thanks to Marc Trueb for the above gravestone photo.  If you have any connections to or knowledge of Company D, 8th Kansas Infantry, Marc would be interested in your stories.  Please contact me.
Posted by Margel at 2:33 AM