Most of us will admit to getting sidetracked now and again in our research.  We start reading one blog and then click on a link to another blog or website, then another, and another.  Finally, we rub our eyes, roll our neck and glance at the clock at the bottom of the computer screen - which must have been invisible up to this point. What! . . . four two hours have gone by. This scenario is familiar to all of us, but maybe your weakness is different - newspapers perhaps?

I, however, REALLY get sidetracked on occasion.  I get sidetracked researching individuals I have no relationship with.  I love all of the collateral information I find about my ancestors.  The stories seduce me and pull me along like a sled pulled by a car swinging from side to side.

The first time this happened was after my post on Emma Paulson. She was a lady that my g-g-grandmother helped, and I really wanted to find out what happened to her . . . and I still do.  I spent over two a week at the time, and as well as a few random searches since then, but with absolutely nothing to show. It seems she vanished.  It was this lack of any clues that soon pushed me back on track.

Recently, I have been sidetracked again.  It started with my Clinton Angel, Mary, who has acquired more research on my family in Clinton than I have . . . and she is not a relative!  I mentioned in an email, that I hoped to find a document confirming where my grandmother went to high school, and to find a record of her best friend, Margel Bridget - last name unknown.  The 1920 federal census lists my grandmother, Berenice F. Moldt, in nursing school in Des Moines, but there was no Margel on the list. This meant Margel had to be a friend from her high school years  at Mount St. Clare in Clinton rather than a nursing school friend.  I have always assumed grandma went to Mount St. Clare because she talked about it, but, up to this point, had no documentation.

TA DA!  In comes Mary to the rescue.  The following is from the Clinton Herald June 1, 1918. I won't give you the translation - also done by Mary - because most of it is extreme detail about the celebration events.

And there they were! On page two listed under the class roll of graduates taking the academic coursewas my grandmother, Berenice Moldt, listed right next to Margel B. Wells.  It was interesting that this combination graduation and end of the year celebration was a multi-day event.  Another familiar name on the list of graduates was Gertrude Gilshannon, my grandmother's cousin, but since Gertrude's name didn't show up in any of her photos, I assume that they ran in different circles.
So now that I had a last name I decided to search in earnest.  I must let you know that earlier I was stunned  amazed by the large number of ladies named Margel that I found when I  searched on Ancestry.com with just a first name. I don't recommend that as a research method, but in desperation we often try for that one in a million shot.  After this, my name doesn't seem quite as unique as I thought.
So, now that I knew Margel's last name, I wanted to know what happened to her?  Might she have descendants who would be interested in how I ended up with her name?  Might they have photos or stories about my grandmother?  So many possibilities.
I didn't have much luck on Ancestry.com but had a hit right away on Family Search.

Here is the cropped record of Margel's marriage to James F. Mosher, a tool designer, 24 May 1919 in Detroit.
Next:
The 1920 census shows them renting in Jackson, Michigan. Margel is not employed but James is a purchasing agent for an automobile factory.

Then they disappear. . . .
There have been a few possibilities that I found.  A 1930 census shows a James F. Mosher as a 38 yr. old roomer, working as a mechanical engineer in a power machinery factory in Mishawaka, IN.  He is identified as single, and as a veteran of a WW.  Everything fits but where is Margel?  Did they divorce?  Did she die?  As I searched for James, using a variety of combinations on Ancestry and Family Search another marriage showed up.  I double checked the parent names, and it was the same James F.  Eight years before he married Margel, at age nineteen, he married Mildred Cudney, age sixteen.  I went back and looked more closely at his marriage record to Margel. Yup, there it is - married once before.  So what happened to her? James had now shed two wives before he was thirty. My searches expanded, but I realized I was straying too far when I began to enter Mildred's parent's names in the search boxes.  I had to get a grip.  Before I gave up, I located a Mildred Cudney from Jackson, Michigan who was the correct age marrying a John P. McCarthy in Missouri.  That's a relief . . .  for a fleeting moment, my imagination had James as a double wife murderer who got away. 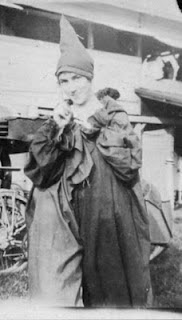 Did Margel divorce James also and go on to marry again or did she die sometime between 1920-1930?  More investigation is needed, but my search for Margel is on hold for a while. While my ancestors are calling me to come back, I will continue to search for Margel . . . just not right away. I need a little space.  I do believe that the Mishawaka James is likely Margel's husband and happily, Mishawaka is only 15 minutes from my home.  Searching through the city directories should produce more information.  Did Margel have any siblings?  I need to find her family in a census and have not yet.  That is another search for the future. This is the only identified photo I have of Margel from my grandmother's photo album, but I think she looks quite a bit like the tennis player in the center of the group above.  What do you think?
Posted by Margel at 3:14 PM