Martha - On and Off Duty 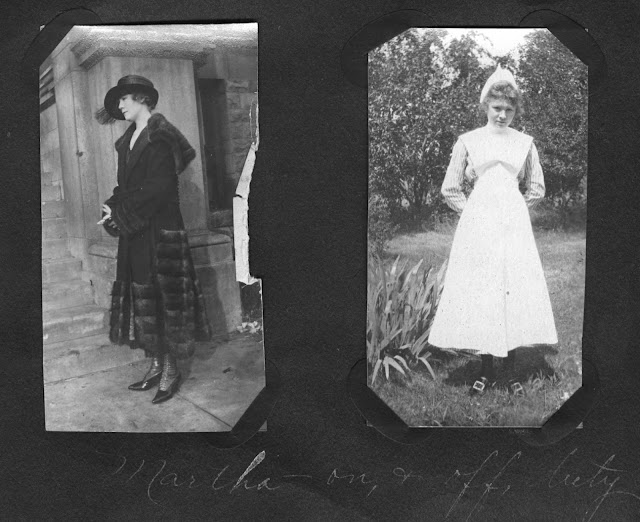 I love the photo album I have from my grandmother.  It is one of my most cherished possessions.  It is very fragile, and the faded white ink in her handwriting will disappear in another generation.  No matter how gently I tried to be, no matter how carefully I opened the pages and laid them on the scanner bed, I knew I was stressing the album pages.  I grimaced the whole time I did it, and I know some torn pages may be torn a bit more despite my gentle touch, but to not do it would see this wonderful legacy fade away.

Most of the photos are from her years at Mount St. Clare in Clinton where she boarded and attended high school as well as many photos of her years after high school in their nursing program.  I am still trying to sort out the exact  timeline for the nursing program with extensive research from Mary, my Clinton angel. The 1920 census shows my grandmother, Berenice (rhymes with furnace) Moldt, living in Des Moines as a student in the nursing school but her album constantly refers to Mount St. Clare.  The album dates from 1918 -1920.

On the page shown above she identifies "Martha - On and Off Duty". The formality of these two photos are in contrast to the rest of the album which shows that my grandmother would have embraced the quirkiness of many current Facebook photos. So who is Martha?  Does she have descendants who would love to see here as a young nursing student?  Martha is quite the fashionista of her day but with a demureness that was considered desirable.  Her off duty coat is fabulous and must have cost more than a few dollars. I tried to match the name Martha with the 1920 census and lo and behold there is only one Martha . . . Martha Smith.  Rats!  Why couldn't it be something more unique? She is listed directly above my grandmother.  I can tell from the census that she was born in Iowa as were both of her parents.  That isn't much help.