What a Mother Saves

Recently while I was going through a cardboard box in my basement full of "mementos" from my past, I found quite a few surprises, a lot of junk, and some memories that I had forgotten.  Part of the box had school newspapers, old yearbooks, the senior play booklet with my part identified on the front, a scrapbook falling apart and filled with tickets, napkins, and photos of places I went.  There was even my green freshman beanie from Purdue . . . hard to believe we really wore them . . .  as well as a news article about the elimination of "hours" at the women's dorms. No doubt about it, these were items that I had chosen to save, but mixed in were items that obviously came from my mother . . . report cards, newspaper clippings of my accomplishments and awards, every letter I wrote home from college, and photos that I don't remember ever seeing.  I sorted through the jumbled mess that had resided undisturbed in my basement for the past 15 years. Can it really have been that long since my mother died? I tossed half of what I saved but none of what she had collected over the years.  Her instincts were better than mine when it came to what was important.

Then near the bottom of the box covered with dust and the crumbled remains of a corsage was the photo below.  Most people would never save a photo in this condition . . . but my mother did. 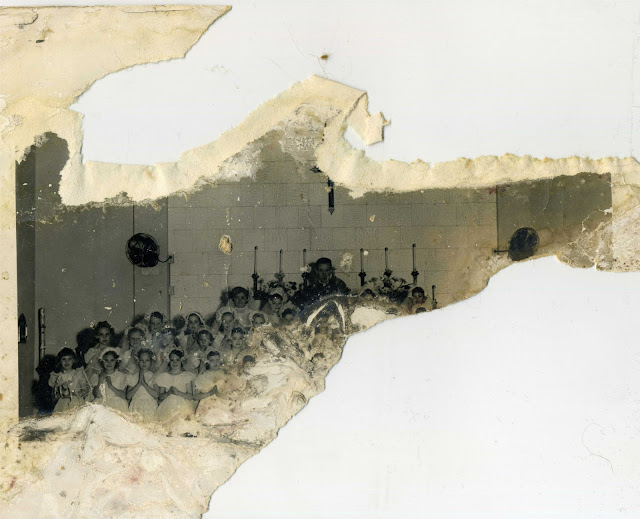 It looks like it became wet at some point in time but by the time it was discovered, the majority of the picture must have stuck to whatever was on top.  Still she peeled it off and saved it.
This is a photo of my first communion at Holy Savior Catholic School in Wichita, Kansas. It would have been about 1954-1955. I am not exactly sure because I don't remember how old I was when I had my first communion.  I know this was in Wichita, and I went to school in Indiana for third grade after my parent's divorce. 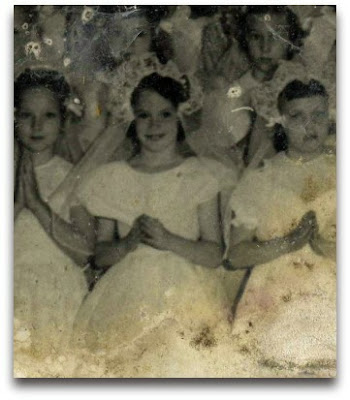 As I looked closer at this half picture with moldy dots on the remaining section, I could see clearly that the girl with the dark hair in the front row was. . .  ME!   I was still in the photo.  What are the odds??  I am positive that my mother made my communion dress because she always made all of my clothes.
.
I would love to find a complete copy of this photo, but, if not, I will cherish it as it is.
What did your mother save?
Posted by Margel at 3:09 PM