Halloween Through the Years 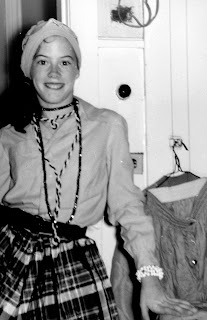 Dressed as my version of a gypsy - circa 1960
Costumes were pulled together from what you could find around the house.
Creativity reigned supreme. 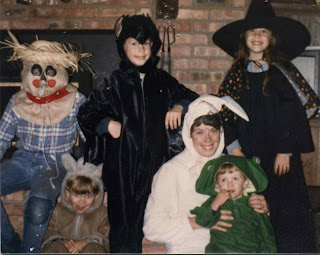 Halloween with my children and friends - circa 1985
The scarecrow, bat, and witch are my children.
A bit more planned, but still all the costumes were sewn by their mothers, and there is no blood or gore.

A Mix-Up in Muscatine

As most family historians say over and over again when trying to explain to others, "It's not about names and dates. It is finding out about the lives of our ancestors that holds a grip on us.  Long after we have the names and dates, we continue to search for scraps of information about the lives and personalities of family members who lived long ago.  So as I was browsing in the Newspaper Archive database available through my local library, I found the accompanying news article about Uncle Ernie (Ernest Thomas Allen) who I wrote about previously here, and here. This is why genealogy never ends.

Muscatine Journal and News-Tribune
Wednesday, July 14, 1920
Page 4
It is hard luck, indeed, when you happen to have the same name as an alleged thief, especially when you have some heartless friends to ask foolish questions.  This is the little pet peeve of E.T. Allen, city street commissioner, who poured his tale of woe into the ears of Officer Cal Schrieber.  It seems that Mr. Allen's front name is Ernest, and a man by the name of Ernest Allen, who works at the Zoahringer garage on Front street, was arrested Monday for the theft of an automobile tire from a man in Columbus Junction.
Friends of the street commissioner called him up on the telephone when they read of the arrest and offered to bail him out, it is said.  He wants it distinctly understood that he did not steal any tire, or at least that he was not arrested for any such theft.  He couldn't use a Ford tire on "Dobbin" he declares.

So Uncle Ernie still had a horse for transportation in 1920, and there is another man by the same name in the town.  That is good information for a researcher  . . . I wouldn't want there to be another mix-up in Muscatine.
Posted by Margel at 8:03 PM No comments: 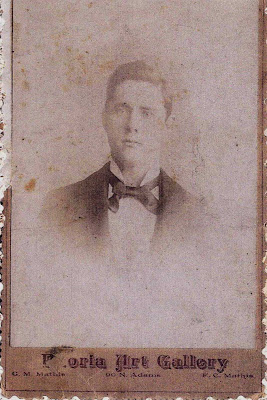 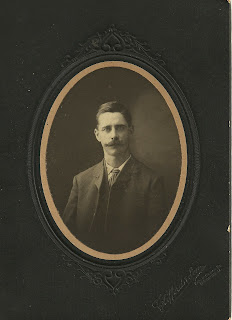