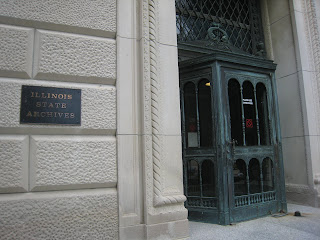 Well. . .  I had an absolutely wonderful time at the recently concluded FGS conference.  The sessions were challenging, informative, and available later as a CD or MP3 download in case you couldn't decide between  the options or your notes were too sketchy.  I ordered several.

My first day as I planned was spent at the State Archives. After an initial misstep when I went to the  archives at the Univ. of Illinois, Springfield.  There I discovered that this location contained predominantly local records and that I needed to be at the IRAD located only a few blocks from the convention center.  Trusting my GPS, I headed downtown and navigated the one way streets, even finding a parking spot without circling the block. The problem was that I only had enough change to park for a little over an hour.  My plan was to get change and re-feed the meter.

After walking around the Museum once, a helpful lady noticed the perplexed look on my face and steered me to the Archives in a separate building at the back and to the side. Finally!  I entered, went through security and put my bag in the locker provided.  They allowed me to take my camera in as long as I removed it from the camera bag. 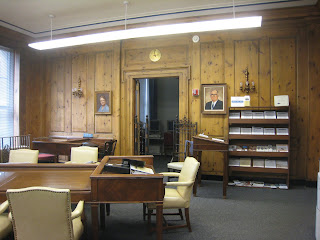 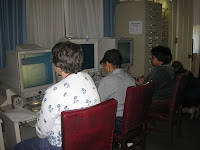 When I told the archivist that I was interested in the Spanish American War records, she let out a big sigh and warned that they were a bit problematic.  She retrieved two rolls - the Muster In and Muster Out.  I started with the Muster Out and she took me to the microfilm reader.  They were organized by regiment and unit - so I thought - and after a bit of going back and forth, I found the first records.  I was looking for my great grandfather, Edward P. Kennelly and his cousin, John W. O'Connor who, conveniently, were both in the 7th Infantry, Company K.  The dilemma was that the regiments and companies were listed on the beginning pages of each section and then not identified on each succeeding page.

When I started on the Muster In film, this problem began to be apparent. I found John W. O'Connor as he was a sergeant and listed at the beginning of the unit, but Edward was nowhere to be found.  The names were arranged alphabetically so I was confused.  I went out to ask for assistance, and it was suggested that I might have the wrong company, but I explained that I found the information in three separate resources including The Adjutant General's Muster Out book that I had accessed through Google Books.  Why, it turned out they had that book, so they pulled it from the shelf, and we verified that Edward was indeed in the 7th Infantry, Company K and they then suggested that maybe the book could guide me to my record.  By this point I had four archivists who were making suggestions and trying to help me. This is when I discovered the problem. The film followed the book exactly then suddenly, the soldiers were completely different.  These soldiers were not listed anywhere in Company K. The pages had become mixed up when placing them on the film and since the regiment and unit are not identified at the top of each page, you might not realize that they are transposed unless you follow the book as I did.  I now realized that I would have to pick through page by page, but at least is was alphabetical so I could skip to the K's. Somewhere in the middle of all this I ran out to move my car to the free parking lot another block over before my time on the parking meter expired. 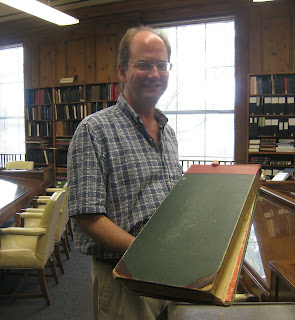 While I was picking my way through the film, one of the archivists came in to tell me that they had retrieved the original book for me to look through.  At first, I didn't comprehend this, then when I saw him with the book, my mouth dropped open.  It was a VERY long book.  I couldn't believe it when they put it on the table and told me that I could look through and find my records.  As I carefully paged through, I realized what a privilege this was.  It did not take long to find my great grandfather. 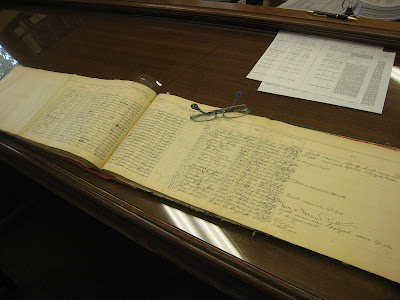 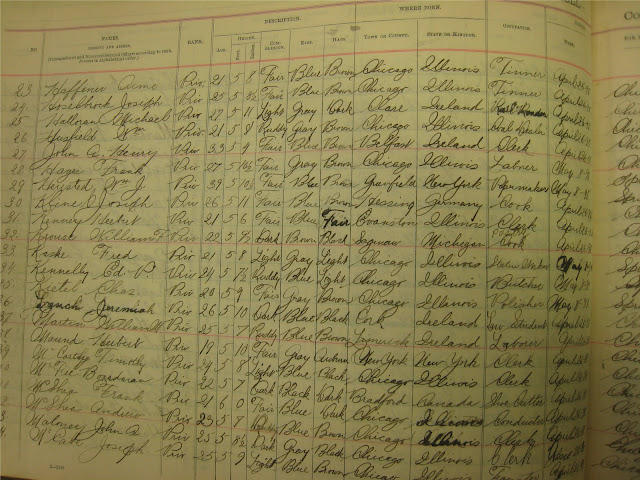 He lived at 439 Carroll Ave. with his mother Mrs. Margaret Logan and mercifully had no physical defects to be listed for posterity to read.  I found it interesting that his signature looks so similar to his son, my grandfather's signature.  Could handwriting be an inherited trait?
I was allowed to take these photos, and when I hesitantly asked if it was possible to get a copy, they told me it was.  It would just take two of them to hold the book.  Each page took three copies to get it all in. I am so grateful to the archivists for all of their help.  Seeing the original record was a wonderful experience. 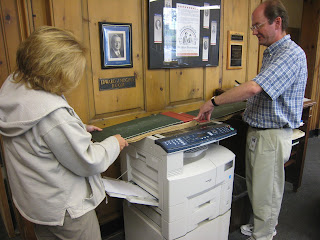 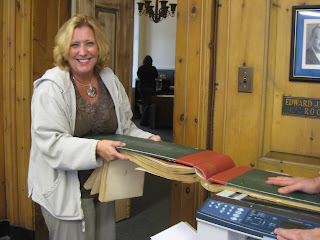 With my primary objective met, I decided I still had enough time to look up two death certificates before they closed at 4:00.  Once I had those, I headed for the convention center.  The vendor mall was open until 8:00 and Susan from Nolichucky Roots  and I had made tentative plans to meet for dinner then go to the Geneabloggers meet-up together.
Posted by Margel at 12:12 PM