Subtitle:  Can Physical Traits Lead Us to Photo Identification?
Well, now that you have seen my uncle Owen Kennelly in this week's Tombstone Tuesday post, it is obvious that he has very distinctive eyes.  On more than one occasion, I have been sitting with family members sorting through unidentified photos and the comment is made, "Oh, that's Owen just look at the eyes."  It was his eyes that I thought of when my late wonderful double cousin, Mary Margaret and I were going through an album of CDV and tintype/ambrotype photos.  The photos had been pulled out long before she received it but were still stuck between the pages.  Some of the photos have names on the back, some just have clues as to the identity on the back, and others are maddeningly blank.  We assumed they must be from either the family of Owen McDonnell or Bridget O'Callahan McDonnell because the identified photos pointed to an origination with that generation.  But are they from both Owen and Bridget or just one of them?

I need to do more research on clothing and hairstyles - something I would find fascinating anyway - to see if I can at least afix the photos in a time period.  Last winter I investigated submitting a few to Maureen Taylor, the Photo Detective but the cost was going to be prohibitive and could not choose just one.  Indecision is a fatal flaw of mine. 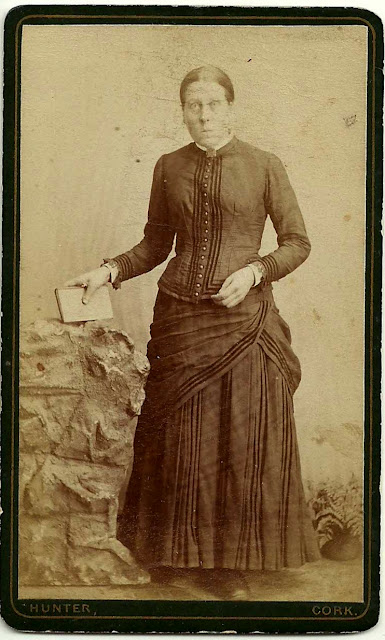 So today, I will share one with you.  It is the lady with Owen's eyes.   It is a definite physical trait and this would be an indication that he inherited it through his mother, Mary McDonnell Kennelly, the child of Owen  and Bridget O'Callahan McDonnell.

The best part though is that this photo is definitely connected to Ireland!! As you can see the photographer is listed as Hunter in the lower left and the location as Cork in the right.  Both Owen and Bridget were from County Cork with Owen from Grenagh and Bridget from Cobh also known as Queenstown. Having a rock for a prop seems like an unusual choice, but it might have some significance that I am unaware of.  I have also tried to look up clothing styles for the 1880's (which is the time period my intuition tells me this is) and it looks similar.  I cannot tell if there is a bustle on the back but all that gathered material sort of points to that.  Now both Owen and and Bridget immigrated in the 1850's so this has to be someone they left at home and continued to correspond with if I have the correct decade.  According to the information on Photo Tree, dark card backgrounds became popular in the late 1880's to 1890's.  But was that the same in Ireland?

Let's turn the photo over.

This gives us a bit more information about the photographer.

H. Hunter
28 Patrick Street,
Cork.
Copies can be had
Enlargements any size on paper or canvas artistically finished in oil, water colors, or crayon, can at any time be produced without another sitting.
And since I am a fly by the seat of your pants, impatient, family historian who tries many options, I Googled the photographer's name as well as posting a query on the Ireland message board of Ancestry.com.  While the internet is great, the kindness and generosity of other family historians is the fuel that keeps us moving. As expected, I received a reply that linked to interesting information.  Using the Ask About Ireland website can be exceedingly confusing so I appreciated a link to the section that would be most helpful.  Combining this with my Google information, I have discovered that,  according to Aldwell's City of Cork Directory, in 1844-45 there was a Henry J. Hunter working as a post office secretary at 27 Patrick Street in Cork but by the 1867 Henry and Coughlan's City Directory there is a listing for an H. Hunter, photographer at 102 Patrick Street.  Then there is a photo on Flickr that lists the date of a photo at about 1890 and the back of the photo is identical to the one above except it is lighter in color.  Am I boring you yet?  I am trying to set down my research findings and methods.  However, the term methods may be a bit too organized sounding for my research.
Now, have you noticed anything else on the back of the photo?  I encouraged you to click on the photo to enlarge it.  In VERY faint script at the top it has the words "(too faint to read then . . .)Great Grandma and possibly Mc".  This would mean it could not be a sister left in Ireland, but the woman is too young in this photo to be the mother of Owen McDonnell, born 1833 or 1837.    I have strained my eyes on this writing innumerable times trying to make out the full notation and used my photo editing software to try and enlarge and enhance it to no avail.
The mystery of her identity remains.
Posted by Margel at 8:28 AM