A Visit to Chipping Warden 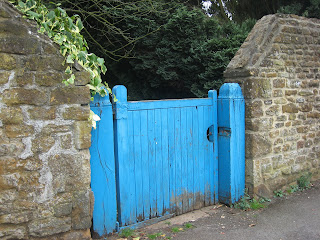 Welcome.  Come inside and I will tell you about my journey to Chipping Warden, a hamlet located barely inside the Northamptonshire boundaries.  It is a town with kind people, houses topped with thatched roofs, two charming pubs (but only one serves food on Mondays), a Norman church, and a bus that speeds through at quarter of the hour.  According to Wikepedia, the Domesday Book records that in 1086 the manor of Chipping Warden was the caput of the estates of Guy de Raimbeaucourt, a baron from  Raimbeaucourt in northern France. The Norman architectural elements of the parish church of St. Peter and St. Paul suggest that it may date from about 1200 with the stained glass above the altar added later . . .  about 1300.

I have now returned from my grand trip with my teenage granddaughter. I am still shaking the cobwebs from my head, but thankfully my jet lag is not as severe as it was when I arrived in London.  A bit of information for those who might not know, chips are french fries, crisps are chips, and a third floor room is really on the fourth floor.  The last being the most important. 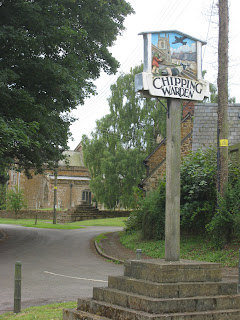 As planned, I spent one day traveling to the small hamlet of Chipping Warden to visit the town where my g-g-g-grandfather, James Bush Allen was born and baptized, where his parents were married and his youngest brother Samuel is buried.  This journey required us to use the London Underground, a train, and finally a taxi. We gave up on using a bus when we couldn't figure out where to purchase a ticket and observed the numerous small towns that were stops on the route to Chipping Warden.  So after a walk to the bus station, we returned to the train station and opted for the taxi driver who had estimated the ride would cost £12.  It turned out to be £15. . . but what is a mere £3 to a dedicated genealogist? 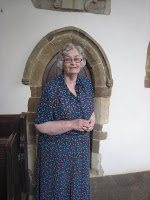 After my arrival in London, I contacted the church warden, Barbara, and we arranged to meet at the church late Monday morning. Barbara is a lovely lady whose family lived in the area for generations. She asked the family names I was researching and told me that she would see if they had any records for my ancestors at the church. This was so exciting.  When we arrived with true British hospitality we were offered tea or coffee upon our entrance. Because they had a funeral earlier that morning , Barbara had two other church members still at the church with her.  I was immediately struck by the simple grandeur of the old stone church.  There is such a difference between a living church and one that is merely a tourist destination.

We talked about the history of  the town, and she explained how the  local people lived years ago. They were mostly farmers working the land of the local  aristocrat.  She told us how her mother had gone into service at the Manor House when she was only twelve and of the skimpy Christmas gift of  beef given to all the families who worked for the land owner. Life was very hard.  She pointed to a slit in the wall behind where we sat.  It was here that communion was placed for the lepers who lived outside of  town. If she told me any dates or more information, I didn't hear her.  My mind was looking at that slit and thinking of the outcast people who had used it, never giving up their faith.  Now my eyes swept over the church pausing at the magnificent stained glass window behind the altar then from window to window and back to the pews.  As Barbara pointed to the Norman arches that were original to the church in 1200 and the mention of Chipping Warden in the Domesday Book, I blinked.  I had no idea it was that old. She then opened the book of records that still remained at the church, but my heart sank when I realized that they only went back to the 1940's.  She said that all of the earlier church records had been taken to the Northampton Record office.  Oh well. . .  I still had hopes for the cemetery that surrounded the church.


I am now going to flood you with images of the church. 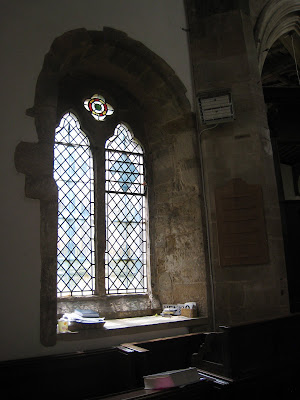 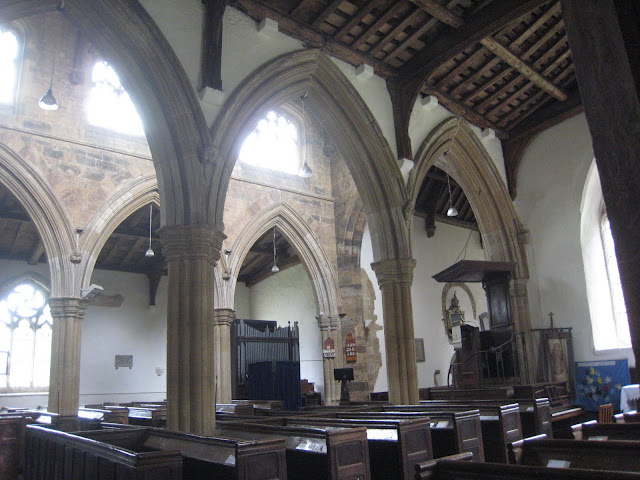 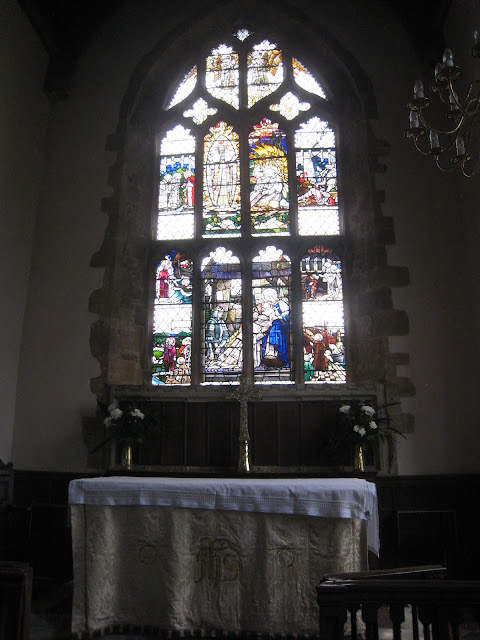 As I was thanking Barbara for taking time to talk to us and share information about the church, I heard my granddaughter shout from outside, "I found one". I quickly finished my goodbyes and ran a short distance outside the door above. . .tomorrow the cemetery.
Posted by Margel at 6:49 PM