When last I posted, my granddaughter had just yelled to me, "I found one."  She had taken my list of ancestor names outside to begin looking around the cemetery surrounding the St. Peter and St. Paul church in Chipping Warden, Northamptonshire. Teenagers are so impatient and she was ready to move around a bit.  It was a lovely day - warm and a bit overcast which kept the temperature bearable.  If my photos seems a bit drab, blame the lack of sun. 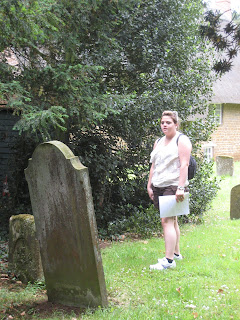 I hurried my goodbyes to Barbara and ran to join her.  There, just a short way from the door she stood pointing at a large headstone.  It was the headstone of Samuel Allen, the youngest brother of James Bush Allen (sr.), his wife and
a daughter.  Wow, we had just started and to find one so soon was thrilling.

The headstone reads:
In Affection and Remembrance
Samuel Allen
who died March 31st, 1910
Aged 87 years
Also of Ann Mary daughter of
Samuel and Susanna Allen
who died Feb. 2nd 1894
Aged 16 years
Susanna wife of
Samuel Allen
who died Jan 22nd 1885
Aged 47 years
Loved ones are gone before
? ? ? days are done
Soon shall ? the ? shore
where partings are ?
I would greatly appreciate any suggestions for the question mark words. 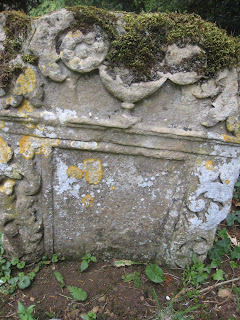 I was just sure that his parents must be close by, and they may have been, but this is the headstone next to Samuel and Susanna's.  It is for the wife of James or Thomas somebody.  Despite the fact that it was a living church with a caretaker to mow the still in use cemetery - there had been a burial just that morning and the caretaker was mowing as we searched - many of the graves were in disrepair. Complete sections of the cemetery were simply no longer mowed giving the vegetation free rein.  Time had worn away many of the names and even though I sat on the ground with my face inches from the headstones, picking at the moss and crud that held tight, I could not make out names or dates.  I cannot fault the church.  They are struggling to remain a congregation with all of the associated costs.  Cleaning and straightening headstones that are hundreds of years old is not a priority. They were kind and generous to me telling me to just pull off some of the stuff if I needed to - easier said than done! 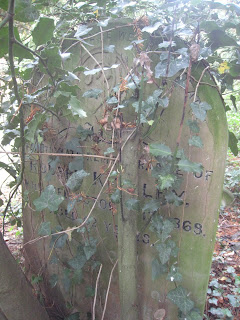 The following photos give you a feel for my task.

I did find a couple of Kitley graves and since the town in Canada where Anna Lyman, the wife of James Bush Allen, (sr.) lived was Kitley, I assumed a connection even if it wasn't family. 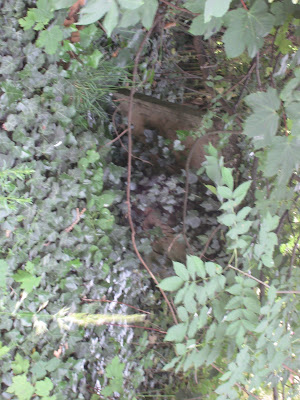 Yes that is the top of a headstone, but it looked like the information had worn away so not worth wading through the brambles which had already cut my hands and legs to shreds.  I don't know if  there were lower headstones that were not visible.  There was a good size section near the back that was no longer mowed. 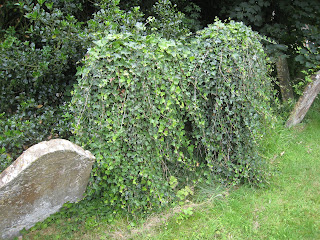 These graves were left hidden by the vegetation and mowed around. 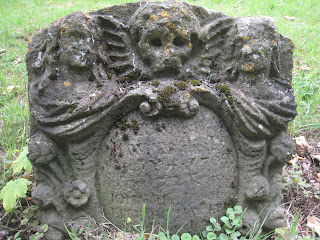 Most were just so worn that you did not know who's life they represented. 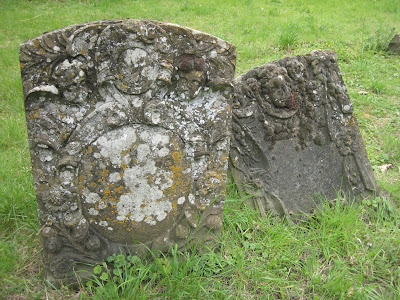 We were able to find a couple of Lines graves. I understand that there might be a Lines ancestor so I photographed them.  In a previous post, I mentioned that James' brother John traveled to Canada in the company of Nathan Lines.  And, after all, when was I ever going to get back to Chipping Warden? 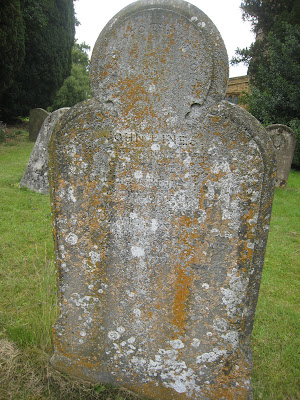 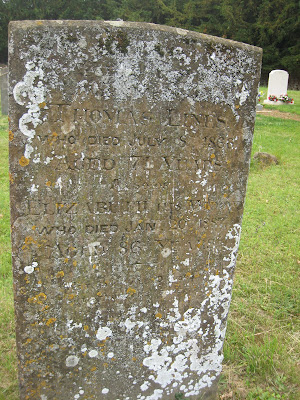 Thomas Lines - died 1868, 75 yrs of age
So it seems that my granddaughter's shout of "I found one" would summarize our cemetery hunt, but success is not about a count just like family history is not about the number of ancestors in your tree. I treasure each person I find and this day I found three.  I always have the sensation as if I am reaching through time and pulling them toward me.
I took a number of photos of older headstones that were still legible and checked to see if this cemetery was listed on Find A Grave.  It was not. So I will try, despite bad experiences in the past, to publish those graves for others who may be looking and cannot have the fantastic experience I had of being there. . .  graves such as the one above for Elizabeth Gyrman who died in 1696.
Tomorrow . . .  the town of Chipping Warden as it is today.
Posted by Margel at 1:06 PM