A Gift From My Ancestors

During the process of trying to decide how I wanted to approach this post, I changed the title several times, typed a few sentences, erased them, wrote a few more, paused, and closed blogger coming back again a few more times. What was it that I truly wanted to write?  Then, as usually happens, a idea just arrived in my brain unannounced while I was thinking about a completely different subject. And as often happens, I was not able to write down my thoughts at the time (driving) so I am now trying to reconstruct those thoughts.

Every genealogist or family historian that I know or whose blog I ever read has mentioned with deep emotion this gift they received from their ancestors. It is commonly mentioned in blog posts and conversations.  It is the gift of appreciation and gratitude for the world we now live in because we know the difficulties many of our ancestors endured.  I think of the many times they lost everything and started over.  I think of their long days of endless back breaking work when the word vacation or weekend wasn't in their dictionary.  I think of them gathering their families and stepping into unknown lands.  I think of the women who had few options but many children. And as a mother it is those children that bring me to the thing that I appreciate the most and do not take for granted. . . modern medical care.  They had large families but expected they would lose several children.  Many men outlived their first wives, sometimes their second . . . and even their third.  Childbirth was often the culprit. 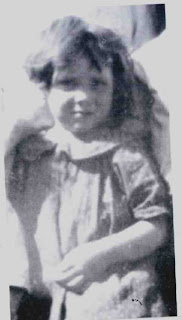 But the deaths of so many children seems so oppressively unbearable to me.  And while the epidemics, illness  and accidents that took so many of them might have been expected to pass their way, the loss must have been just as unbearable for their families when it did happen.  Every family historian can list pages of children who died. Often from illness or diseases that rarely bother us today.  My great grandfather was one of seven children but only two made it adulthood.

Baby  June was one of those beloved children. Agnes June McDonnell was the youngest child of Owen Jerome and Nettie (Elizabeth Burnett) McDonnell.  As the youngest, I am sure she was pampered and indulged by her older sisters and teased by her brothers. The emotion of her death could still be hear in the voice of her older sister, Georgia, when I had a brief conversation with her less than a year ago . . . and Georgia is now 92.  She was remembering family members and smiling as she told me that my mother was a "biter". "Of course," her voice became low and soft, and her head tilted down toward her lap, "there was Baby June. She. . . she died when she was quite young." Georgia was only two years older than June so she has a child's memory of it, but the emotion of it still remained. The newspaper article says it all.

DIPHTHERIA OF
MALIGNAT TYPE
IS DISCOVERED

Definite warning is issued to parents and physicians of the city by the health officer who within the past 24 hours has found two cases of diphtheria in a type so malignant as to cause death quickly.  The state is threatened with and an epidemic of the same virulent disease, is the word from other localities and it behooves every one in the vicinity to carefully safeguard the child life over which they have surveillance.
The official notice follows:
"To the Physicians and General Public:
"Last evening I saw a child at 407 Commercial street, Lyons, who had died during the afternoon under circumstances which made the attending physician suspect that the child might have had diphtheria.  I cultured the nose and throat of the dead child and the nose and throat of all the other member of the family.  The laboratory reports show diphtheria bacilli present in the culture from the dead child and from others in the family. This case was reported as not having had any membrane in the throat.  The child was ill about two days but seriously ill only a few hours before death."
"This morning I saw a case at 417 Commercial street, child aged five who was dying at the time I first saw it and had membrane on both tonsils.  This child died within and hour after it was reported.
"The strain of infection these cases is evidently of unusual virulence and I feel that both the physicians and the parents should be extra cautious in determining the nature of illness in children, sick.
"In this connection I wish also to call your attention to the fact that scarlet fever is present in Lyons in a form more severe that usual.  Some of these scarlet fever cases present a very extensive tonsilar membrane which in the absence of a scarlet fever rash might be mistaken for diphtheria.  Cultures show, diphtheria bacilli uniformly negative.  In the more severe type I am using the recently perfected scarlet fever antitoxine and have had the Campbell Drug Co. stock a supply of it for general use. Some of the scarlet fever cases with membrane resemble diphtheria and some of the diphtheria cases have a toxic rash and resemble scarlet fever.  I feel on account of the care and skill manifested by the physicians in past epidemics that we will be able to put down this infection promptly, but I also feel that extra precautions should be taken in arriving at a diagnosis.
H.R. SUGG
Health Officer
No criticism is attached to the attending physicians in either case above mentioned.  Both cases were seen by regular practitioners who found that they were called too late to do any good in their efforts to save the lives of the children.

Did any other children in the town or area die from this virulent strain of diphtheria or did this health officer's warning prevent it?  What three other members of the family tested positive?  Was Georgia one of them?  Did they also become ill, and what was the treatment that enabled them to survive?  Did they survive because Baby June's death allowed them to receive treatment in time? One thing is sure, that as the family was dealing with the sudden death of one child they were also trying to save others.

Baby June died  just as a vaccine for diphtheria was being developed.

We all have our moments and complain when life is not as perfect as we would like it to be, but genealogists and family historians have received a gift from their ancestors - appreciation for the lives we have and the medical advances that allow more of us to live those lives.
Posted by Margel at 3:48 AM