The Youngest Son Runs Away


David Barrett was the youngest son of Isaac and Winifred Walker.  In 1856, at age ten, he traveled with his family down the Ohio River and up the Mississippi and Missouri  rivers to St. Joseph, Missouri and then overland by ox drawn wagon, settling on the west fork of Vermillion creek in Marshall county, Kansas.  Other family members from their Quaker community in Cadiz, Ohio also settled nearby.  In Kansas the family hoped to find a home free of the evils of slavery, but, there was no peace. The Kansas Territory was an early battleground with a violent tug-of-war between pro-slavery southerners and the free-state abolitionists.  How often did Davy, as his mother called him, hear his strong willed father and uncles rage about the future of Kansas and the immorality of slavery. And when his father and older brother enlisted in the Eighth Kansas Infantry did he beg to join them?  At fifteen it must have chafed to be left behind with his mother and three sisters.  Did his father tell him that his job was to be the man of the house and look after the farm and family? It was the end of September when they left and enlisted in the Eighth Kansas Infantry, Company G.  There was still plenty of work to be done on their sixty-five acre farm.

Yet, only a little over three months after they left their home to fight for their beliefs, the family received word that Isaac had broken down while returning home with the body of Thomas. David took an ox team and went to the aid of his father.  Together they brought Thomas home to Barrett.  We don't know how long his father Isaac stayed after the burial of Thomas, but the indication was that it wasn't long before he returned to his unit . . .  leaving David behind a second time.  I imagine his mother holding her remaining son tightly to her.  I would have.

But the misfortunes of war were not finished with the Walker family.  In the Spring of 1862 a caisson ran over Isaac's ankle, crushing it, and he was discharged for disability on March 20,1862 at Leavenworth, Kansas.  Isaac remained in the hospital for two months before he could travel back to his farm and family. Information traveled a slow road in 1862.  When did they learn that  he had been injured . . . but was still alive?

It was during this time that Davy ran away from home, enlisting in the Thirteentieth Kansas Infantry at Leavenworth.  Was it planned or a spur of the moment decision made as he walked behind the oxen plowing the fields?  A biography of his son Carroll, tells us, " He went from Frankfort in company with Dick Fairchild, of Barrett, Kansas. David B. Walker was without shoes, and as a prospective soldier he utilized the law of necessity and took a pair of boots belonging to a traveling man and which had been set outside the bedroom to be shined."  Don't you love how my family can explain thievery as a noble and necessary act?  Is it any wonder Carroll became a lawyer.

Below is the enlistment paper of David Barrett Walker.  It was part of a newly available database from Ancestry.com.  You will notice that sixteen year old David avoids the thorny problem of "Consent in Case of Minor" by simply lying about his age.  David traveled with his regiment until the battle of Pea Ridge and then was discharged in Van Buren, Arkansas November 23, 1863 "per S.O. no. 302"  According to one story, he was wounded and honorably discharged for disability, and since he drew a pension this rings true, but. . .   I just want to know what  "S.O. no. 302" was. Other soldiers on the Adjutant General's report are listed as discharged for disability, why not David? 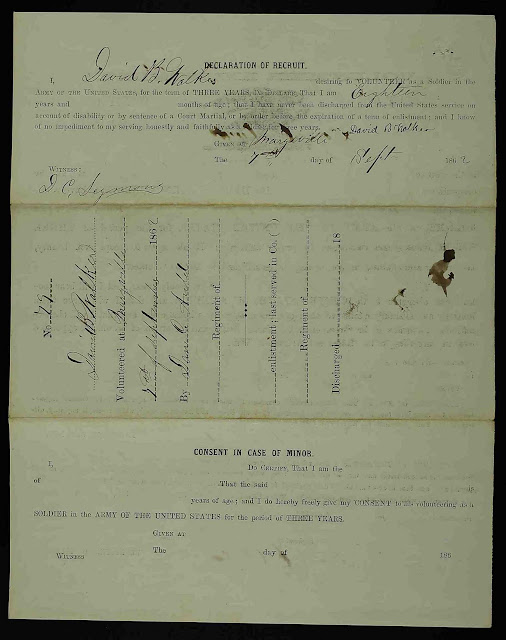 Late in 1863, David returned to his Kansas home and found it neglected, and dilapidated due to his father's condition.  While he had been away, his mother had been left with the care of her invalid husband, three daughters and the responsibility of making a living.  She plowed the land and raised what crops she could.  Later in her life she told a writer, "Davy was always a good boy to his mother.  When he was at the front, he always sent me his wages.  It was not a great sum, but it seemed a great deal in those days, when money was so scarce and hardship so plenty."  Beginning again, David helped his family rebuild the farm. When David married his cousin, Annette Barrett, he took a homestead near his parents and also worked at a saw and grist mill in Barrett operated by his uncle, A.G. Barrett, his mother's brother. 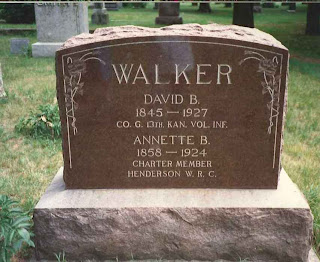 David went on to become a well respected member of his community, but I wonder if he ever replaced the shoes he "borrowed".


As you can see, I come from hardy stock . . .  even if we are opinionated on occasion.


Notes:  I had to choose which of two enlistment papers I would include.  Both had the same number and information so it is the same person, but one of them did not have his signature.  Instead it had "his mark" between the David and Walker. When I checked the 1860 census, he was listed as attending school at age 14 so I assumed that he knew how to write his name.  Subsequent census records identified him  being able to read and write also.  Seems unusual.

Listed in his regiment was an Elias R. Fairchild who survived and mustered out at the end of the war.

My resources for this post are:  Family obituaries,  Ancestry.com database "Kansas, Civil War Enlistment Papers, 1862, 1863, 1868", family photos, History of Marshall County Kansas, Kansas and Kansans, Report of the Adjutant General of the State of Kansas, 1861-1865. Vol. 1. , and  Portrait and Biographical Album of Marshall County Kansas
Posted by Margel at 7:09 PM