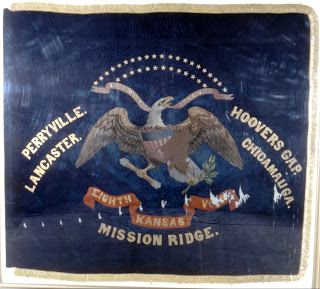 According to his obituary, my gr-gr-grandfather Isaac Walker, was a man of strong convictions and beliefs. When I mention this, I have been told, on more than one occasion, that it must be an inherited trait.  He died in 1890.  His lengthy obituary, written before a family paid per word to tell the community about the life of a loved one, gives a glimpse of both his personality and soul.  I love the opening, which described him as a man who, ". . . imbibed the principles of physical and mental liberty".  Yet . . . at age 48, after a lifetime of struggle, with a farm to work, a wife and family, he and his oldest son, Thomas, enlisted in the Union Army. . . Company D, 8th Kansas Infantry.

Why?  According to his obituary, "Mr. Walker. . . was an aggressive worker for reform.  Beholding  a struggle between races or classes, he always took sides with the weak against the strong.  An Abolitionist of un-compromising zeal, he was for years a part of the underground railway whose passengers were traveling from slavery to freedom."  Did the Quaker beliefs  of his family that he learned as a child  influence this? . . .most likely.  But the Border Wars began in the Kansas Territory many years before the first shots were fired at Ft. Sumter. From 1854 forward the pro-slavery and anti-slavery forces were engaged in a bloody battle for possession of Kansas.  Finally, on January 29, 1861, Kansas entered the Union as a free state.  Then only three short months later, the war which had been simmering across the land became official, and the first Kansas regiment was called up on June 3, 1861.  Isaac Walker and his oldest son Thomas enlisted and mustered in September 28, 1861 at Lawrence, Kansas.

The Eighth Kansas Volunteer Infantry was recruited specifically for service within the state and along the Missouri border.  Isaac wanted it known that he was fighting "those damned Copperheads at Marysville" referring to the large number of South Carolinians who had settled there. It had been violent battle for Kansas to enter the Union as a Free State and the state had many southern sympathizers still within it's borders. An invasion of Kansas by the huge number of Rebels massed in Missouri was considered inevitable so the various companies were scattered at different locations around the state. Company D was sent to Iowa Point on the Kansas-Missouri border.  There they camped, waiting for the Rebels, waiting for the battle, waiting . . . and waiting.  Enthusiasm gave way to boredom as the monotony of camp life took it's toll.  It was a severe winter, and sometime in December, Thomas, age eighteen, and a soldier of only three months, contracted measles and died.

Isaac had promised his wife he would look after their son and, after his death, was determined that he would take his son's body home to his mother and burial in their hometown of Barrett.  A kind and generous man loaned him a team of ponies and a wagon to make the long ninety mile journey home over the barren prairie.  What thoughts and emotions must have consumed him as he made this heartbreaking lonely journey where tears could be shed with only the sun and stars for witness? What conversations did he have with his son laying in the back of the wagon?

When Isaac was but 10 miles from home. . . only a day's journey . . . he broke down and could go no further.  He was emotionally weary and physically broken from his long travel and insufficient food. He felt he could go no farther on this sorrowful journey.  A settler who lived nearby noticed his distress and rode over and asked if he could help.  Word was sent to the family and his younger son, David B, came with an ox team to support his father.  Together, they brought the body of the young soldier home for burial.

Committed to the cause, Isaac returned to his regiment until a short time later he was disabled when a caisson ran over his ankle, crushing it and putting him on crutches for the rest of his life. A heavy burden for a farming family.  During this time, his only remaining son, sixteen year old David Barrett, my great grandfather, left home enlisting in Company G, Thirteenth Kansas Infantry.  Only a wife and three daughters were  available to tend the farm. 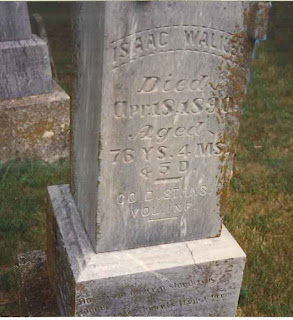 Proudly, Isaac's family remembered him as a man " . . who worshiped at the shrine of deeds instead of creeds and after he had studied a problem and became convinced that he was right, it mattered not to him if he was almost alone, he would stand undaunted against overwhelming opposition".  Wow. . .This sounds so much better than stubborn and opinionated!