It has been a busy week.  It was the end of the grading period, and I have been drowning in tests and projects to grade as well as staying until 5:30 to help students finish said projects.  It is interesting that when students get a good grade, they show everyone, saying " Yea, I got a. . . .", but when the grade is lower than they want, they pout and say "She gave me a. . . "  Ahhh, teflon kids.

Tonight I tried relaxing by trolling genealogy blogs but quickly became frustrated because I always want to comment. Unfortunately, the stars don't seem to be in alignment tonight or else the full moon is interfering , but whatever, the cause I can't comment on any blogs.

Two blogs seemed to speak to me.  First, the Genea-Quilters blog announced that tomorrow is National Quilting Day.  Since I was a quilter long before I was a family historian,  I am very aware that there is a National Quilting Day, but I didn't realize that it was tomorrow.  My mind was preoccupied with attending the South Bend Area genealogy fair tomorrow at the Mishawaka, IN public library and printing off the $1 discount coupon.  The second blog to catch my attention was the Allen County Public Library blog which had a post about "Researching and Documenting Work Animals and Pets".

Now this was inspirational!  I could pay homage to both suggestions with a single family photo - well, maybe two.  So in honor of National Quilting Day and documenting family pets . . . 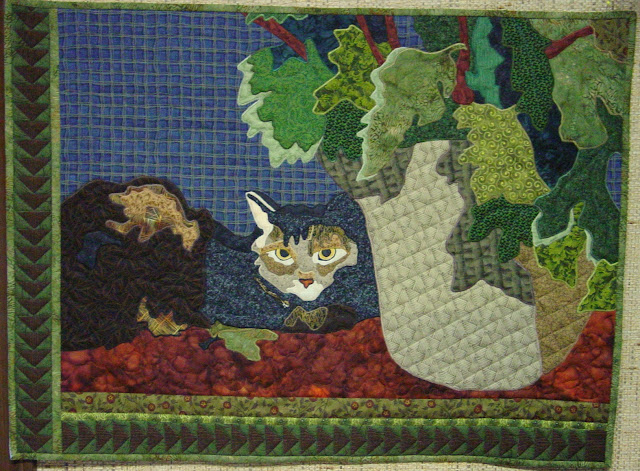 This is an applique quilt I made of my daughter's beloved childhood cat, Calamity Jane.  Calamity would sleep on the foot of her bed every night and curl up next to her when she read.  Calamity was ill named as she was exceedingly shy and would jump at every loud noise.  She would hide from the family in closets, under beds and would only tolerate an occasional pet, but she loved my daughter beyond measure.  Calamity was a celebrity cat as she had been on a cover of People magazine as a kitten. Then one day after many years Calamity became ill, and we had taken her to the vet several times.  She wasn't doing well, and we discussed whether we would have to put her to sleep.  None of us wanted to make that decision, and my daughter would not give up hope. As we were driving down to visit my son at college, my daughter called.  Calamity was having trouble breathing. She asked me what she should do, and I felt so helpless as I heard the pain in my daughter's voice as Calamity died in her arms.  I still cry when I think of this.  I was too far away to even put my arm around my daughter when she needed it.

This is the original photo I used as a basis for the quilt. It really captures Calamity's shy personality. 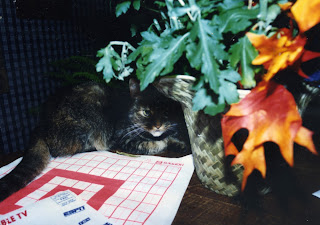