In my quest to identify the other five siblings of my gr. grandfather, Edward P. Kennelly, Sr., I have found two brothers.
I found Michael first because he was the easiest. He is listed on the 1870 census with his parents as shown in the image below.  But,(Insert deep sigh! ).....beyond that I have no information.  I don't know when he died, or where he is buried.  I have a lot to still discover, but he has a name.

Using this as a starting point, I started sifting through my existing research trying to see if there were any clues.  I found the cemetery records that were given to me by the kind man at the Calvary Cemetery office.  One is for the block of graves where I found my g-g-grandmother and the mother of the children I seek, Margaret Kennelly Logan.  The other is a block of graves located on the opposite side of the cemetery which includes, based upon the name and death date of 1878, the grave of Edward Kennelly, my g-g-grandfather and father of the children. There are two Michaels  listed on this record but neither of them are identified as a child or a "small". Using these dates, I searched the online databases of the Illinois Archives but so far no luck. I will persist but since there are enough spelling variations of Kennelly to fill a book, it may take awhile. I am hopeful, one will be my gr. grandfather's brother. Of course, there are other options on this record also. . .Catharine. . . Eugene. . . James. . . John. . . William. . . Ellen and Dorah.  None are listed as children.

For the next discovery I have to thank a clerk who made a mistake over 130 years ago.
I turned my attention to the other record, but there is only one Kennelly that I cannot identify - Jeremiah.  Hmmm. . . . he is the earliest person in this block, and he was originally buried in another location then moved here. This needs investigation. 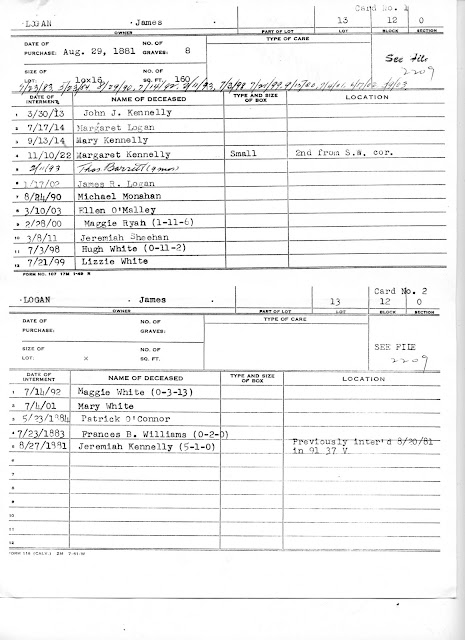 ,
Again I go to the Illinois Archives but, as before, no luck.  Dang!  I needed a break.
Since I was looking at their names again, I figured I might as well order the death certificates for John and Mary Kennelly and find out what caused their deaths.  I had the record number from the Illinois Archives and Cynthia at Genlighten was cheaper than a tank of gas to Chicago and definitely quicker. At the last minute, I decided to throw Jeremiah in to see if she could locate him.  I had no record number, but I told her the parent's names and the date of death.  She wrote back explaining that death certificates this early rarely included the parent's names.  There was little identifying information other than occasionally the address.  Okay, I knew it was a long shot, then she found this. . . 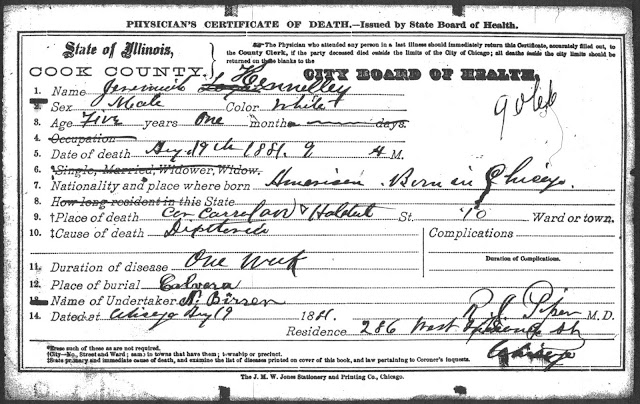 No doubt about it.  This is MY Jeremiah Kennelly.  The last name that was first listed was Logan and then scratched out with Kennelly added.  By this time the widow Margaret Kennelly had remarried James Logan.  I'm sure the clerk assumed the last name of five year old Jeremiah was the same as his mother's but when she corrected him it was like a "message in a bottle" just waiting  for me to find it.

There was a diphtheria epidemic in Chicago during the 1880's.  Poor little Jeremiah was one of the victims.  How quickly it happened, only one week.  I wonder, did any of his brothers or sisters die of the same disease?  How does a mother cope with such tragedy and still go on?