Fitting the Pieces Together

The first time I heard the name Logan used as a last name for my Great Grandfather Kennelly's mother was during our visit with my mother's first cousin. When I asked if she knew anything about her, the response was, "Oh, you mean Grandma Logan."  Since family names and relationships were swirling in my head at that moment, my reaction was to just stand there staring blankly for a while a moment until the little grey cells starting working, and I replied, "Logan?  . . .   Why was her last name Logan?" Then quickly and at the same time we both said, "She remarried!"  I couldn't stop smiling for hours.

As I pursued this new lead, my first stop was back to Ancestry and a re-search of the census records.  There I found this entry in the 1900 census for Chicago.  I am sure that I must have seen this earlier, but dismissed it as not my family for several reasons. First the name Logan which was unknown to me at that time, secondly, it lists the Logans as being married for 32 years which would also eliminate them.  However, a John Kennellary is listed as their son.  Then why was his name Kennellary.  It also states that Margaret has two living children, but only John is listed here.  Could my gr.grandfather be the other?  My new lead made me realize the errors in the census information.  But, everyone told me that Grandpa Kennelly had no brother's or sisters.  This census would mean that he did indeed have an older brother as well as five other siblings who died before 1900.


While I was at Ancestry browsing around for Margaret Logan, I stumbled across this entry in the Ancestry database of Chicago Irish Families, 1875-1925

Wait a minute! That name sounds familiar. I need to check that census record again.  Sure enough, listed among the boarders on Carroll Ave. and below the section above was the following:

I was right.  There was a Lizzie . . .  but the obituary is for the mother of the Lizzie in this census. It shows the father Hugh White as a widower. Putting this information together expands the family relationships.  STOP. . . .I am getting sidetracked again.

I need to stay focused on researching John J. Kennelly.  My next step was the Historical Chicago Tribune available on the internet through my local library.  With a cup of caffeine at my side and my computer glasses perched on the end of my nose I found:


Now we're cooking - this hooked everyone together - assuming that "Edward Kanneliy" was again a misspelling.  Couldn't they have just copied the spelling of the name of the deceased?? This also gives me the maiden name of John J.'s wife.  Do you suppose that might be a misspelling also.
The Illinois Archives has a super online search, and I quickly found the correct death record for John J. Kennelly - listed as JJ Kennelly.  I needed to see his death certificate to be sure.  Instead of using the Cook County I contacted Cynthia at Genlighten or Chicago Genealogy.  I have been delighted with her personal service, outstanding quality and reasonable price.  For $5.00 I quickly received his death certificate. 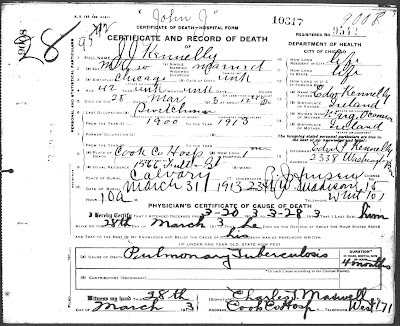 Now there is no doubt.  My gr. grandfather, Edward P. Kennelly, living at 2338 W. Washington Blvd. gave the information for the death certificate of his older brother, so this now becomes a primary resource for his parents.  According to the death certificate John J. died of tuberculosis at Cook County Hospital in 1913 and is buried at Calvary cemetery. 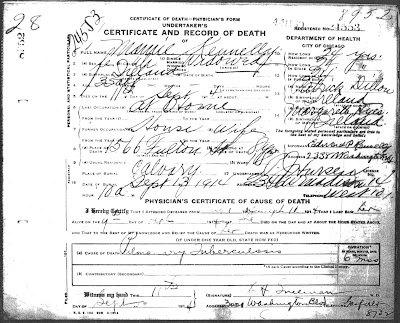 Why didn't his wife give the information?  Possibly too grief stricken?  It's a possibility, but she died 18 months later also of tuberculosis, but luckily she was able to die at home.


Imagine my surprise when I went looking for the grave of my aunt Margel and found all of them together on the same headstone. 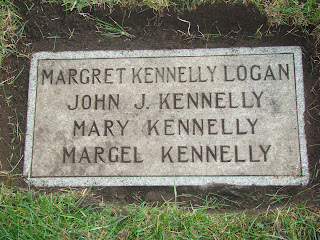 So our family history research is rarely a straight path, like on the television show, but more like a jigsaw puzzle. To see where we are in a puzzle we sometimes have to fit several pieces together first.  The leads from the memory of family members, online research, official documents, newpapers, and cemetery visits come together to give a snapshot of our ancestors.

Now I need to find out the names of the other five children and how they died. I don't want them to be forgotten. Oh yes, there is also the O'Connors to sort out.
Posted by Margel at 5:30 AM