Where Do I Go From Here?

And now for a brief continuation of yesterday's frustration. . .

This morning I re-found the Ask about Ireland website with their searchable Griffith's Valuation.  I found it from a link at the Cork Ireland GenWeb site that led to a link, that in turn led to a link, and so on. But as soon as I saw the website I had a "aha" moment.  I'm sure that I must have bookmarked it either on my laptop or my desktop, and either in Internet Explorer or Firefox, but regardless, it isn't on the combination I have in front of me now.  One issue is that from their main webpage, I cannot figure out how to navigate to the Griffith's Valuation so if I revisited earlier I might not have realized the Griffith's information was there.  My fantasy dream hope is to find the four brothers living in close proximity on Griffith's since they were adults at the time, and Owen did not immigrate until approximately 1852. It might just catch them before their immigration. Of course, Owen might be still living with his mother.

Did you feel my heart stop?

Informational note: I am searching the Ask Ireland Griffith's records intermittently while writing this post.  I tried and re-tried using the various brother's first names paired with McDonnell, dutifully checking the similar names box, but, after several attempts, I noticed that  the variation McDonald never showed up in the results.  So with a loud sigh and no expectation of success I entered McDonald for the surname, left the first name blank, and for the barony, I selected Barrett's since I had a vague recollection of a notation to that effect on family information given to me by my double cousin Mary.  Why not?  What was one more dead end?  When the results came up, I gasped. 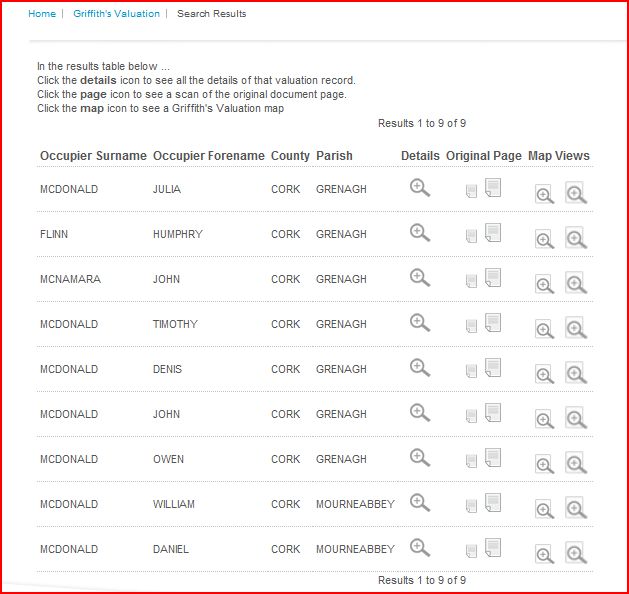 Except for two, all of the results were in Grenagh - the location listed in Owen William's (my g-g-grandfather) obituary.  The name Denis is shouting at me because, Owen William also had a son named Denis, and I wondered who his name came from.  Could it be Owen had a brother Denis?  Grenagh is the parish name and as such, is a much larger property than just the town of Grenagh - which I presumed earlier to be the Irish home of Owen William.

I needed to see the original.  Wow, there is a lot to sort out to be able to decide if this is in fact my g-g-g grandfather's family - my family and the family of my cousins known and unknown. 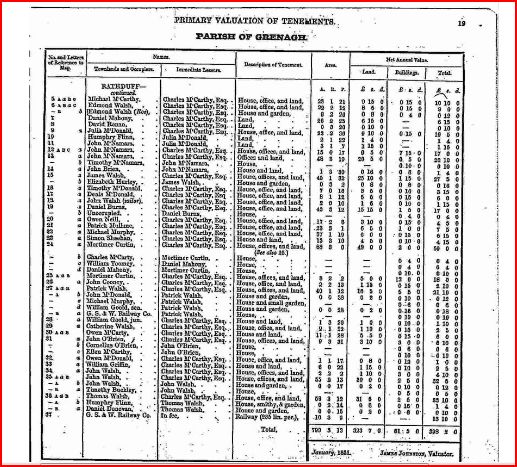 Below I have listed the record information for two of the individuals - Owen and Julia.  Julia would have been a widow at this point.  As you can see, the townland is Rathduff rather than Grenagh.  Now I have some new search parameters for the Irish Family History Foundation.  I wonder if it will make a difference in the birth record results.  I wish I had a large paper map of Griffith's to spread in front of me to find the locations referenced on the records to see if they are anywhere near each other.  I have tried it using the pop up map that is linked to the records but by the time I zoom in enough to see the numbers of the parcels, I lose track of where I am.  The information on the website did say that the order of the list does not necessarily indicate proximity or adjoining properties. In looking at the original page above, it appears as though Julia sublet a few acres to two other individuals - interesting. 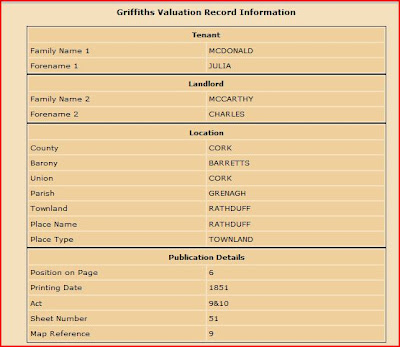 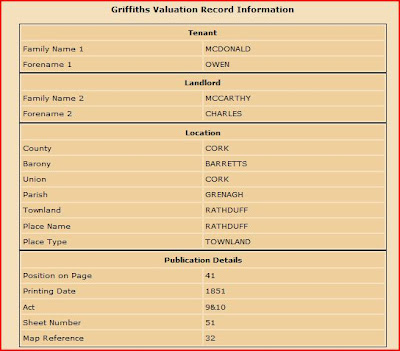 Please notice that the year of these records is 1851.

Yes, I noticed that the eldest son, Michael, is missing. I tried to do a search for him using both McDonnell and McDonald but there were too many results in the county of Cork - none in the Barony of Barretts.  Could Michael have already immigrated?  Bartholomew would also have been young - could he be the one doing the farming for Julia?

This has been a satisfying morning.  I found (or re-found if you are being picky) a new resource, I corroborated the Grenagh information, and while I have not broken down any brick walls, I feel as though I have chipped a peephole in this one.  This is the best information I have to date, and after all my blog is not wikipedia, it is a chronicle of my family history adventure.

To go back to my opening statement . . . Where do I go from here? Suggestions are always appreciated.