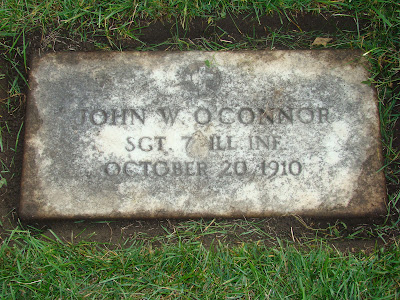 
Long before I read the suggestion of other bloggers that you should photograph the headstones around your relative's, I found that I naturally look around at all of the cemetery neighbors of my ancestors.  I admire the style of their markers. I read their names and dates of birth and death. I read about their religious beliefs or military service.  That is why, this headstone grabbed my attention.  As you can see, I even had the caretaker dig around the stone that was being overtaken by grass for a better photo. His headstone is located a few steps away in the block of graves next to my aunt, Margel Kennelly, and gr-gr-grandmother, Margret Kennelly Logan.  I wrote about this adventure here. But what drew me in? What made me care enough to clear the grass for the photo?  It was the name O'Connor.  My gr-gr-grandmother's maiden name was O'Connor. Of course, I knew this could be a coincidence.  After all, Irish names in Chicago are as numerous as the blades of grass at the cemetery.  But just take a photo and check on it later, I told myself. 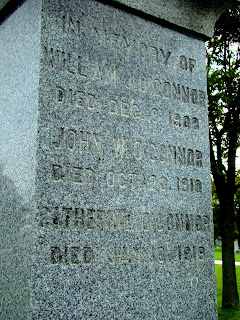 I assumed from the date that he was possibly in the Spanish American War so my first visit was to the online Illinois Archives database of Spanish-American War veterans . Well, I'll be gosh darned, there he is.  My great grandfather was a veteran of the Spanish-American War, so next I needed to check his files to see what unit he was in. . . Amazing, it was the same unit.  The coincidences are now mounting, but I still needed to sort out the relationships.  After all, what is the chance that a soldier with the same name as my gr-gr-grandmother, and in the same unit as her son, my great grandfather would be buried  next to her? He is buried with his father William (d. 12 Dec 1908 and his mother, Catherine (d. 13 Jan 1919) who survived him.


His death certificate was available on the Family Search website so from this I found out that he died at age thirty-one of tuberculosis.  He was never married , and he was in a hospital in Arizona when he died. I wonder why he was in Arizona?  His mother gave the information for the death certificate and so I learn that her maiden name was Morris.  Will this help me prove or disprove his relationship to my ancestors?  He was a very young man, younger than my grandfather,  to be made a sergeant. What skills or accomplishments did he have to recommend him for this elevated rank? Oh wait. . . I forgot this was Chicago. He might have had "connections". 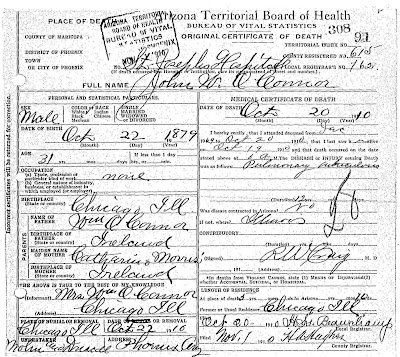 Later when I was searching for information about my great grandfather, Edward P. Kennelly's war service, I found the Adjutant General's muster out rolls for Illinois volunteers 1898 &; 1899 on another of my favorite resources - Google Books.  Naturally, I looked up John W. O'Connor also.  According to the muster out rolls he was mustered in as a sergeant in April 1898 and reduced to a private June 1 per paragraph no. 1, per S.O. (standing order?) no.10." then July 1 appointed sergeant from private per SO no. 21 and then sick to quarters by July 31. Something tells me there is a story between standing order numbers 10 and 21. On Aug. 1 he was transferred to a hospital where he was on sick leave.  When he mustered out, he was overpaid by .90 and the record shows that he still owed the government seventy-three cents.  But. . . did he contract tuberculosis during his military service?

So next  time you find yourself wandering around the tombstones, look for familiar names and click a few extra photos for later research.  Thank goodness for digital photographs because I take a lot of photos.

This could still be a coincidence.  John's last name, the location of his grave next to my gr-gr grandmother's, and his military service in the same unit as my grandfather might be stacked together by the fates to mislead me.  But for the present, I think of him as family.