This past weekend I met so many new (to me) relatives at my double cousin, Mary Margaret's funeral. I explained how we were doubly related, and then  names, relationships, and stories began.

As I was talking to one cousin (double of course) the subject of Auntie came up. His most vivid memory of Auntie revolved around chocolate cake.  As a young boy he was visiting the Kennelly  relatives in Chicago when, I think he said, his Aunt Mary Kennelly offered him a piece of chocolate cake - a nice thin slice. When Auntie saw this she took control of the cutting knife and proclaimed, "Oh, for pete's sake Mary, he's a growing boy!"  and proceeded to cut him a man-size piece of cake.  With a smile on his face he turned and never forgot that cake . . .or Auntie.  Then I told him that recently I was going through an old crumbling three ring binder of recipes that belonged to my mother.  Most of the recipes were cut out of old magazines like Family Circle and Woman's Day and pasted onto lined loose-leaf paper.  But like a piece of gold hidden in the dirt,  I found Auntie's Chocolate Cake recipe - in my grandmother's handwriting.  He lit up, and asked if he could have a copy.  Of course I promised I would send it to him, but I thought you might like to see it also, and now . .  I have a story to go with the recipe. 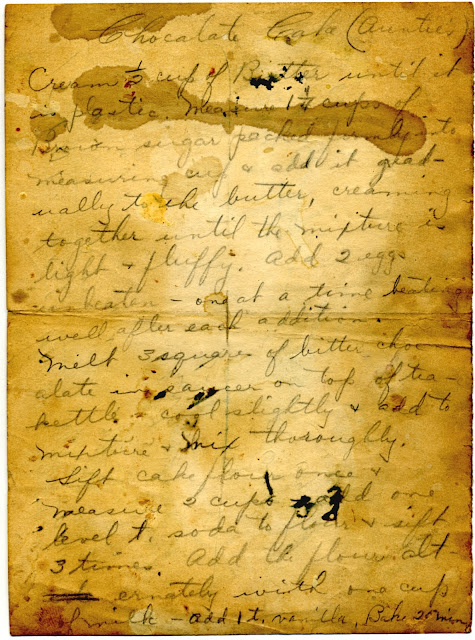 Chocolate Cake (Auntie's)
Cream a 1/2 cup of Butter until it is plastic.  Measure 1 1/4 cups of Brown Sugar packed firmly into measuring cup & add it gradually to the butter, creaming together until the mixture is light & fluffy. Add 2 eggs unbeaten - one at a time beating well after each addition.  Melt 3 squares of bitter chocolate in a saucer on top of the teakettle.  Cool slightly & add to mixture & mix thoroughly.  Sift cake flour once and measure 2 cups & add one level teaspoon. soda to flour and sift 3 times.  Add the flour alternately with one cup of milk - add 1 t. vanilla.  Bake 25 min.

Note:  Recipe was written by Berenice Moldt Kennelly
Posted by Margel at 1:04 PM