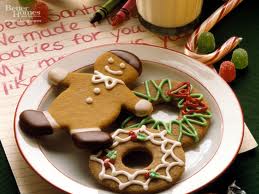 As I mentioned in an earlier post my mother did not particularly enjoy cooking - except for sweets!  I don't have any memories of Christmas cookies.  Oh wait, there was a Christmas or two with Spritz.  I think grandma gave the cookie press to my mother, and a sense of obligation must have overwhelmed her.  Then again, I don't ever remember Grandma making Christmas goodies of any kind. 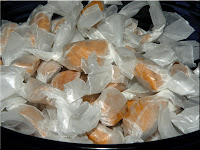 What I have a vivid memory of my mother making is candy!!  I remember pulling taffy and caramels so buttery that the mention of them can still make my mouth water.  The children had the job of cutting up squares of waxed paper and wrapping each piece individually.  Our reward was, of course, fresh caramels!  Ummmmmmmmmm. . . . . . . .excuse me I drifted off into caramel memory bliss. 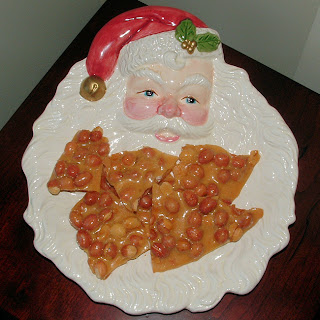 But the memory that has become legend in our family is about the peanut brittle.  One Christmas, mom decided to add peanut brittle to her increasing Christmas candy tradition.  I am sure a neighbor gave her the recipe and told her how easy it was, but the exact origins have been lost in time.  She already had the candy making thermometer and other necessary supplies.  Since I worked at the candy counter of the local dimestore during the holidays, it was easy to purchase the raw peanuts.  In those days, the nuts were roasted at the store and then put in a rotating display. Everything went perfectly until it was time to turn it out to cool. The recipes said to turn it out onto a large enamel pan.  The originator of the recipe told mom that she could just turn it out on her stovetop because it had a large flat enamel section in the middle, and that she had done it many times that way.  Now here is where the story becomes murky.  Somewhere in the directions, the step to butter the surface was left out.  Mom, of course, said she was never told she needed to do this.  It looked so perfect as it cooled on the stove, but when she tried to lift it, she discovered it was stuck tight to her stove.  She chipped, chiseled, and pried that peanut brittle in an effort to get it off the stove, digging gouges in the enamel as she tried.  Some of the peanut brittle remained despite her efforts. We had peanut brittle crumbles that year as mom would never throw out candy.  The next year we had an enamel pan, and we buttered it first.  The story is that when she traded in that stove for a newer model, there was still peanut brittle stuck to it in spots!

For those brave souls, I am including her recipe.  Myself, I make cookies.


Peanut Brittle
2 cups sugar
1 cup Karo
1/2 cup water
Boil above ingredients until it threads then  add 2 cups of raw peanuts and 1 tablespoon of butter
Cook until 290 degrees stirring constantly  add 1 teaspoon vanilla
Remove from stove and add 2 teaspoon baking soda
Pour on to greased pan.
Lift sides until cools every once in awhile
Posted by Margel at 10:16 AM