Ancestor Approved. . . But Would They Really? 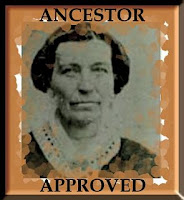 I am speechless very honored to have been awarded the Ancestor Approved by Nolichucky Roots.  While I have seen this on many blogs, I didn't pay close attention to what it was.  Often my blog reading is done through Google Reader, and I miss all of the extraneous awards and links in the side columns.  There are so many good blog writers out there in genealogy land, and Nolichuchy Roots is one of my favorites.  After a bit of investigation and following the link in her blog post - duhhhh - I discovered the following.

Leslie Ann at Ancestors Live Here began the tradition and said. "As a recipient of this award I ask that you list ten things you have learned about any of your ancestors that has surprised, humbled, or enlightened you and pass it along to ten other bloggers who you feel are doing their ancestors proud.

My dilemma is that I don't read ten other blogs that have not received the award already.  This "passing on" will have to wait for a bit.

Now, on to the challenge at hand.  I am such a haphazard genealogist and I think my list will reflect that.

1.  I have a strong Quaker (Society of  Friends) heritage on my father's side of the family and their obituaries confirm that they were not shy in expressing their opinions. - I wondered where I got that trait!

2.  Whenever I start to feel like life is beating me up, I think of the hardships endured by my ancestors as they traveled to a new world, moved their families multiple times to avoid living  in slave states, and watched helplessly as their children died of diseases such as diptheria.

3.  According to an obituary of my g-g-grandfather I am a direct descendant of Charles Carol of Carrollton, a signer of the Declarationm of Independence, and who had a fortune to lose by signing.

4.  I come from a family of strong women and flawed men.

5.  Headstones can sink so deep that there is no indication they are there.  Always include a metal rod in your cemetery kit.

6.  When I traveled to Ireland last summer and walked around a replica famine ship, The Dunbrody, I could not comprehend taking a family on such a voyage in such conditions.  They were allowed on deck only 30 minutes each day to build a fire to cook their bread and dispose of waste.  If it rained, they had to eat the dough raw.  I get shivers as I write about it.

7.  My g-g-grandfather, Isaac Walker, enlisted in Company D, 8th Kansas infantry with his oldest son and when this son contracted measles and died at Iowa point, he borrowed a wagon and horse to take his body home for burial.  After a long journey, he stopped short of his destination, exhausted and sorrowful.  A message was sent to his home by a local settler and his youngest son, my g-grandfather traveled with an ox team to meet him.  Together they brought the body back to Frankfort.  Isaac then returned to his regiment until a caisson ran over his leg and broke his ankle.  He suffered with this his entire life.  He enlisted because he was a staunch believer in the evil of slavery. He acted on his beliefs. His wife plowed the fields and kept the farm going while he was gone.  This makes me proud.

8.  Isaac Walker took two boys when the Orphan Train came through Kansas.  I wish I knew they were treated well, but I haven't been able to discover any information.  I am confused by this information.  It shows that people and relationships are complicated  - then and now.

9. Lots of the women in my family, sewed for a living. My g-grandmother Mae Allen Moldt owned a dressmaking shop during a time when women did not work if they were married.  She always was a modern lady.  My g-grandmother Mary McDonnell Kennelly was a personal seamstress for Mrs. Potter Palmer in Chicago.  My paternal grandmother, Gertrude McCoy, was a milliner back in the day when every respectable woman wore a hat, and it didn't ruin you hairstyle if you did.  My mother, Gloria Kennelly Perry, sewed every garment I ever wore except underwear and swimsuits.  She was always on the cutting edge of fashion.  My passion for sewing must have a genetic link.  I'm sure it will be acknowledged by scientists any day now.

10. I am more Irish than I realized and my American roots go farther back than I ever imagined.
Posted by Margel at 10:35 AM