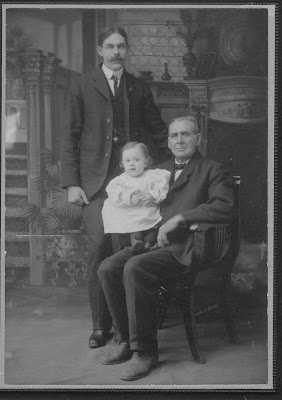 My g-g-grandfather's name was Owen McDonnell, Owen  William McDonnell to be exact.  And that is important because in our family there are plenty of Owen McDonnell's.  He was the father of Mary McDonnell Kennelly ,my gr.grandmother, who lived at 2338 W. Washington Blvd. The photo at left is titled "The Three Owens".  It is Owen William, his son, Owen Jerome, and his grandson, Owen James.


According to his obituary he was born in Grenagh, Ireland in 1837 and immigrated when he was 18 years of age.  The problem is that his headstone has 1833 chiseled into it.  Which to believe??  Family lore says that he was born a "stone's throw" from Blarney Castle. Hmmmmmm. . . . . . Grenagh is close but not that close to Blarney Castle.  Census records give a mixture of years for his immigration as census records often do.

Recently this digital chase has become an obsession.  Some of my answers and more of my questions have come from my research at the Irish Family History Foundation. They only have an index so the information you can access is minimal and to see the full record costs 5 euros (that is $6.97 including a .23 foreign transaction fee for those readers in the U.S.). This means I REALLY need to narrow down the many pages of result to find MY family. The search options at the Irish Family History Foundation are: county, surname, first name, year (with a range), and if you are looking for births there is a place for mother's name and parish.  All of this sounds wonderful, however most of this is information is what I am hoping to find in the record!!  But, move over Sherlock, I'll give it a go.

The 1860 Federal Census for Elk River, Iowa shows Michael, age 34 (b.1826), his wife Ellen, along with John, age 30 (b. 1826) and Bartholomew, age 26 (b. 1834) residing together.  If I presume (I know that isn't a good thing to do, but I have to start somewhere!) that the birth date for my Owen is 1837, then he would be 23 in 1860.  I have not yet found a census record that I am certain is him.  I will use this birth order as a guide in my record checking.
At the Irish Family History Foundation website, the first thing I do is login and go to the search box.  I select the Birth and Baptism record, check the box for county Cork and enter the date range typing Owen"s first and last name.  Hmmm. . . four hits - not too bad but still expensive.  Then I try Bartholomew since I am hoping that this is a less common name than Michael or John (Warning! Don't use the Irish Sean as it won't work).  I still put in a date range because it seems that exact dates weren't of great importance to my ancestors.  I used 3 years.  Two hits, but the date is 1831.  I put in the father's name of  John as the family claims it is.  One hit.  This is great.  Now, let's see if we can identify the parish.  Grenagh is listed in Owen's obituary so let's start there. I choose the Advanced option but  no luck.  There are 90+ parishes and so I begin to try and locate the parish that the one Bartholomew is registered in.  An eternity later - it shows up as Mourne Abbey rather than Grenagh.  I wonder how far apart these are?  Is this a "stone's throw" from Blarney Castle?

When I check on Google Maps it shows the distance from Mourne Abbey (B) and Grenagh (A) as 8 km. which is very doable.  If I search for Owen in Mourne Abbey will I find him also?  I need to confirm that it is my family.  Did you hear me scream??  There is an Owen born in Mourne Abbey with a father named John between  1829-1839.  But I need to confirm the birth date so I keep changing the birth date with no range and discover that this Owen (I am not yet ready to claim him as mine) was born in 1830.  I feel deflated.  This is so far outside my presumed range that it cannot be correct.  I decide to take a chance that the birth record for Bartholomew will help, so I buy this one record. 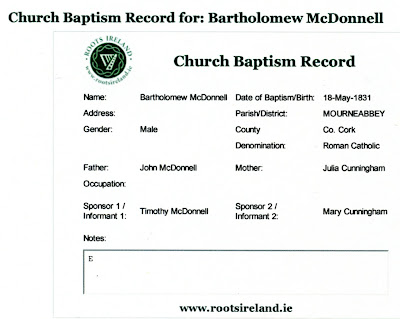 So his mother's name was Jula . . . back to the Advanced Search, and I put in Jula for the record for Owen.  Yes!! This is the same family, but is is my family. Both Michael and my Owen William named daughters Julia so this could be confirmation of a family member named Julia - perhaps a mother?   I wish I could see the original records to tell if the dates could be wrong. Now I check to see if this John and Julia had a Michael and John.  Nope!

This is where it gets messy.  What about John and Michael, the two eldest sons? I cannot find records for any parish with a John McDonnell father and a Julia mother for a John and Michael McDonnell. I can find all kinds of variations of this information by mixing and matching, but nothing really lines up.  Did they move?  Family information claims that the father, Sean (John) McDonnell came from County Tipperary.  One interesting bit of information is that in researching the name Julia Cunningham, I found a Julia Cunningham born to a Bartholomew Cunningham . . . . . ahhhhhh!, so plausible, but . . . the search continues.