Government Efficiency at It's Best

A couple of days ago a very thick manila envelope arrived addressed to me.  That's funny - I didn't remember sending for anything.  My genealogy passion has had to take a back seat to my work since school started.  When I looked at it, I was even more puzzled.  It was from the Department of Veterans Affairs - WICHITA OFFICE??  This meant it was about my father.  Why was I getting something from them?  I quickly opened it and found my father's medical file along with the letter I wrote requesting it  - dated over one year before!  The stamp on the back verifies that they received it in Aug.  This odyssey began when I learned that an immediate family member can request the service records at no charge - or so I thought.  My parent's divorced when I was seven or eight and I never saw my father after that time. So, since my father is a bit of a mystery, I thought I would give it a go.  Free is always a good price.  The letter below is four months after my initial request which involved applying online then they sent a letter for me to actually sign for permission then they sent a request for $20.  There goes the free part!  A couple of months later I received a single sheet separation paper.  Minimal, but a couple of new pieces of information.   Hey! Wait a minute. Where was the medical record I requested?  So I called to find out.  I am nothing if not tenacious.  The letter below is my next step after the phone call. I have cropped it to leave out the identifying information for my father and myself.  After all,  I am sure the paparazzi would be hiding in the shrubs for a photo. 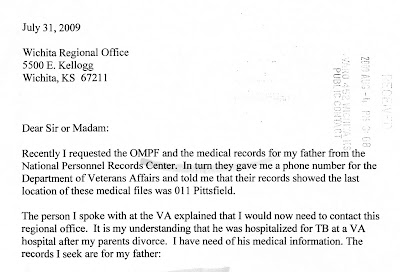 I skimmed the medical file that spanned his military service until shortly before his death.  It will take some time to look at it in more detail.  But I will have to look at it when my mood is right.  Anything about my father is either completely devoid of emotion or absolutely drenched in it.

My quick observations:  It confirmed his stay in a TB hospital after the divorce.  I have always tested positive for TB even though I have never had it.  ﻿Interestingly, the information that was the most upsetting wasn't his continual alcoholism, which I knew about, but the fact that he had some type of infection during his military service and had lost quite a few of his teeth!  Oh vanity, my vanity.  I am sure there are more surprises in store. 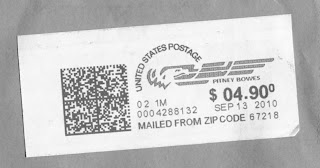 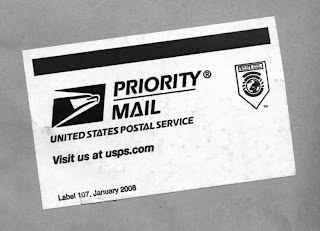 The best part of this surprise was that over a year after my request, it was sent Priority Mail for $4.90 because they obviously wanted to get it to me as quickly as possible  Remember this is the same government that paid $2000 for a toilet seat!  I wonder how long it took to deliver those?