Won't This Saga Ever End?

Well, today is my report on the end of our trip.

Our original plans were to go to the library and possibly the historical society if we found out that they were open and had records that are available for us to look at.  I left a message on an answering machine the day before asking about their hours and leaving my phone number.  We weren't sure if they were open one day a week or once a month.  That morning as we started for the library when my phone rang, and it was the historical society and museum.  Yes, they were open from 9-11 so we quickly changed our plans to accommodate their hours.  We could go to the library afterward.

I wish I had a photo of the Clinton Historical Society and Museum, but I was so excited that I often forgot to take photos on this trip.  I even scoured the internet for an image to "steal" with no luck.  The all volunteer staff was so friendly and helpful, but it was almost overwhelming.  This is my fault because I didn't really have a prioritized list of  information we were seeking. As they showed and described the records and information located on each wall, my eyes started to glaze a bit.   I gave my brother the task of looking through the city directories since I love the year by year picture they can give.  He brought his scanner in and began to look through them.  I should have given him a list of individuals to look up, but he made do with the surnames, Allen, McDonnell and Moldt.  I was trying to find where our grandmother graduated from high school and a couple of marriage records.  My sister-in-law with her halo still affixed to her head agreed to look through the card files for family members.  I was the only one who came up almost empty handed as the time raced by. I found a death record for Ellen Allen, my gr. grandmother's sister, who died of consumption in 1888 at age eleven - I think it is her sister.  Of course, it could be a random stranger with the same surname.  Shortly before they closed, one volunteer worker suggested that we needed to visit the records office since Clinton was one of the few places left where you can still go in and actually put your hands on the original records.  We added that to our list of "to do" jobs.

The Historical Society and Museum was closing and we gathered up the few modest records that we had found.  Off to the library - NOT QUITE YET!  Man cannot live by knowledge alone.  We needed food so  Dahl circled around the downtown, and we settled on a local sandwich shop and bakery.

Now that we had nourishment, we were ready to tackle the microfilm machine in The Root Cellar of the Clinton library.  I had corresponded with Fran before and found the library staff so extremely helpful.  Fran even remembered me when I introduced myself.  You can't beat small town friendliness.  She showed us where the microfilm was and set us up at a machine.  I thought we should concentrate on obituaries and since I am the designated supervisor, that is what we did. . . . . . . until 5:30.  It was tedious and my back had a permanent knot in it.  When I suggested stopping for dinner, I heard no objections.  Before we left the downtown area we wanted to see St. Irenaeus.  A church built in the early 1870's that was scheduled for demolition before it was rescued by the Historical Society and Museum.  Family members told us that Owen William McDonnell and James B. Allen helped with the construction of the church and that several family members were married there.  James B was listed as a stonemason in several census records so it sounds plausible. But now that the church has closed, where are the records stored??  I am still working on that. 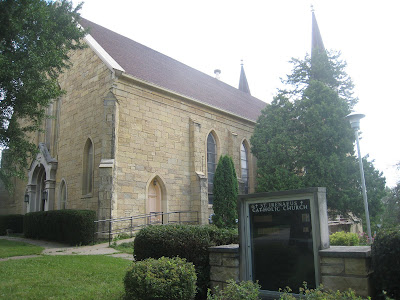 At dinner, we all felt a little overwhelmed, and we hadn't yet made a hotel reservation for that night.  After  2-3 minutes much discussion we decided to head for home that night and stop when we were out of town a couple of hours.  That way we could get home the next day by noon since I still had to drive 2 1/2 hours from my brother's house back to my own home.  I refer you to my original post in this Saga series.  We never got to the records office, but that just means that it is at the top of my list when we return.

Since we had gone through every small  town on the way to Clinton, we decided to take the major highways home to shorten the trip.  Silly, silly, silly.  We didn't find a place to stop for the night until 10:30 and gas until the tank said zero miles left.  I was digging out my AAA card since I was sure they would need to bring us gas.  Don't ask how I know they do this.  We tried to stop earlier, but an exit that listed hotels sent us over 2 miles into a sketchy part of town with a crumbling high rise style hotel and one that had closed long ago as the sign was very rusted.  Farther down the road we tried again, but couldn't get through the parking lot for all of the semis parked at various angles and the group of men hanging out at the door smoking put us off - imagine that!  Finally we found a choice of hotels at an exit for Peoria.

The next day was uneventful, and I arrived back at my house before dinner.  We definitely need to return.  What did I learn from this trip . . . . and I learn something from each trip?


Wisdom from the Trip
1. Appreciate the kindness of strangers. The cemetery caretaker, the volunteers at the history museum, the directions from the ice cream merchant, and the generous and helpful librarians, made our trip a success.

2. Don't measure success in quantity. This speaks for itself.


3. Don't have a rigid schedule.  Be prepared to adjust when opportunities present themselves. The historical society wasn't part of our original schedule, but since it was open we adjusted.

4.  Take a cemetery kit with extra water in a jug. Some cemeteries have no water source.

5.  Take more photos!  Not just the headstones, but the people and places on your journey.

6.  It's good to be organized but don't allow this issue to stop you from making a family research trip. We can never get it ALL done anyway.  Just plan that you will return!

Edited addition: 8. Take snacks for the road.  I suggest something salty and something sweet.
Posted by Margel at 10:45 AM