Saturday Morning before Putting Up Corn

Today, is corn day.  During our recent family research to Clinton, Iowa we saw people sitting in lawnchairs with plastic bags of corn selling  for $3/dozen.   My daughter had already mentioned that we "really should put up corn again"  since it tasted so good. I admitted that it had been a long time, since I had done this, and the best part of her comment was that she also offered to help!  I can't turn down an offer like that, and she is right that it does taste fabulous!  If you have only had frozen corn from the store, you are missing out on one of life's great foods.

This morning I went to my local farmer's market and paid $4/dozen, but the corn looks amazing and is so huge that I will get a lot for my money.  I had scoped out this vendor at last week's market, comparing to other places during the week.  Nothing looked as good, so today I had a plan.  I checked last night to make sure that my daughter was free to help.

Since I am tied up for the rest of the day, I wanted to write a short post. Geneabloggers, designates today as Surname Saturday.  What surname should I choose. . . . .hmmmm.


I have finally decided on O'Callahan. Why?  Because I can use more of my Ireland photos.  Bridget O'Callahan married Owen William McDonnell in 1864 in Whiteside, Illinois.  I wondered why several family members married in Illinois, rather than in their own town of Clinton, Iowa.  When I visited last week, I asked at the Historical Museum.  One woman said, depending on where they lived in Clinton, such as Lyons, it would have been closer to cross the bridge and go to Illinois.  At last a common sense answer.  Look at the location of the photographer in their photograph. 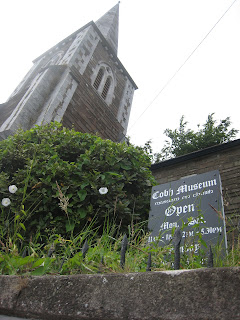 Family stories, tell me that Bridget immigrated from Cobh, Ireland and that she was a bond servant in Cleveland, Ohio (Edit 8/19: Family photos seem to point to Cinncinnati, Ohio as the location instead of Cleveland, Ohio.) before her marriage to Owen William McDonnell.  They had eleven children and only two of them married.  The unique fact here is that I am biologically related to their son Owen Jerome and his wife due to my grandparent's marriage. My grandfather's uncle, Owen Jerome McDonnell married my grandmother's aunt, Elizabeth Bernette Allen. TaDa!

When in Ireland recently, I visited the Cobh Heritage Centre  hoping to find out a little more about her.  The research available was marginal, but they sent me up the hill (It must have been a million steps) to the city museum.  Now this was asking a lot of my non genealogy interested companion, but she is a good sport and went along. 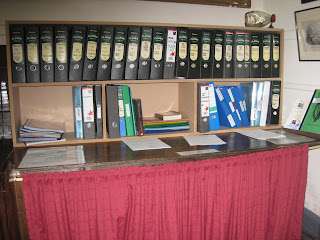 She looked around the museum and enjoyed the hand made lace while I pulled book after book off the shelf quickly scanned the many pages of names of those who emigrated from Cobh during the appropriate years.  Sadly, I had no luck.  But luckily she is still my friend.

We then took the train back to her daughter's house in Kinsale.

I guess these aren't the most picturesque photos of Ireland, but they go along with the blog content so . . . . .
I will post just one fabulous photo.  How difficult it must have been to leave this beautiful place.  I need to just spend a few days boring you with beautiful photos of Ireland.  You, of course, can choose to ignore the post, but it will be terribly satisfying for me.  I wish I knew how to do a collage on here.