With a call from my brother, we moved our departure date for Clinton,Iowa up a day or two.  This meant that I needed to leave for his house the next day.  Yikes!! My first thought was how am I going get together the information we will need. My dining room table is my usual go to place for projects and organization, and this is where I had scattered  tossed dumped spread out carefully my paper files.  This room is used for meals only once a year at Thanksgiving or occasionally for a family get together so the table is always available for whatever current project I have.  When my brother called, I was still trying to sort through my information, and the table looked like it was the day before I had to take the tax records to our account.  I may not be good at KEEPING my life organized, but I am a master at GETTING organized, and nobody can triage like me.  I pulled out three additional bags (Note: this is a reference to my genealogy filing system mentioned in an earlier post) and stuffed placed the non-Clinton files in them.  My reasoning was that anything I didn't have listed in my newest genealogy notebook purchased in a variety of colors at a local Wal-Mart for ONLY a quarter each could be found with a little effort in my file.  I purchased several dozen and started with the following titles:  Research trips and Organization. What can I say, hope springs eternal.

From my standpoint this was not an efficient trip to Clinton looking at it from a strictly time perspective.  Our plans were to go from my brother's house, and he would drive. My house is approximately 4 1/2 hours from Clinton if you believe Google Maps and my brother's house is 5 1/2 hours.  Add to that the fact that my brother's house is 2 1/2 hours from my house and a fifth grader could see the problem.  This trip was going to be a 16 hour round trip for me. It was suggested that if I came down the afternoon of the day before we left, we could get an early start and go over our plans the night before allowing us to arrive in Clinton by noon.  Sounded good to me, and I arrived by dinner time (notice the time discrepancy between when I planned to arrive and when I actually arrived) the next day.  My brother and I loaded the software for his scanner onto my computer and pulled together all of  the equipment we thought we would need while my fabulous sister-in-law cooked dinner for us.

The next morning we got an early start as planned, but the key had barely been turned in the ignition when two of us were asking to stop and get some "good" coffee.  My father had a great saying that I have used a lot with my family:  "WE'RE OFF - like a herd of turtles".  I think many people can relate to this sentiment. Our route started by passing some wind farms in Indiana and Illinois.  It is a very strange and a little futuristic looking sight if you have never seen a large wind farm before.  The realization of just how large a windmill is hit us as we passed semis hauling the individual parts escorted by cars with warnings of "Wide load".  As we continued our route took us through what felt like EVERY small town in Illinois.  It seemed charming at first, but as the drive stretched out longer than we intended, it lost a little of it's appeal.  My brother's willingness to point out and stop at any quilt shops helped considerably. 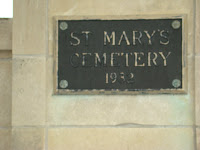 Mid-afternoon we arrived in Clinton and we found a hotel with internet access and breakfast included.  Yea!  After dropping our luggage, my brother turned to me and said,  "Well, what are we doing first?"  My instant answer was cemeteries as I knew I had that information written down in my handy dandy Family Research Trip notebook.  It was raining, of course, but we started with St. Mary's where three generations of our ancestors are buried.  The first stop after entering was to talk with the caretaker, who luckily was in the shed,  about how to locate a grave.  He was so nice and helpful as he turned worn and torn large sheets of paper with the cemetery layout.  He had a list of plot owners, but not individual graves.  The first was our grandparents, Ed and Berenice Kennelly, then her mother, Mae Moldt Shelko and her second husband John Shelko.  According to the caretaker, the plot was owned by James Allen, Mae's father and Berenice's grandfather, but there was no headstone.  My hope was that it had sunk, and we would be able to raise it.  No such luck.  There was only a space where his headstone should be - and HE was listed as the owned of the block of four graves.   His wife's headstone lists her as the wife of James A. Allen instead of James B. Allen.  Who made this mistake since he was still alive when she died? 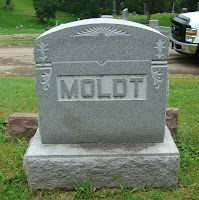 The next cemetery, where Berenice's father was buried was also administered by the same caretaker.  He gave us directions and met us when we arrived there, looking up the graves and driving us to their location.  This was a huge and hilly cemetery.  But sadly, three of the four people buried had no headstones or inscription.  There was only a large family headstone and a small individual headstone for Hans C. Moldt. However, this cemetery listed each person buried there rather than just the block owner and the date of death for each.  This was new information for us and would allow us to search for obituaries the next day.  Interesting family note:  Edward Thomas Moldt and his sister, Anna Moldt Shelko died within three months of each other and then their spouses married each other.  Anna and Thomas are buried with their parents, but Mae and John are buried together. 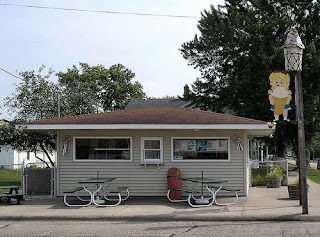 Our cemetery oddyssey continued with three, I think, more cemeteries.  We traveled next to Sabula and had the best soft serve ice cream cone, I have ever eaten at the Korner Stop Ice Cream Shoppe. The very helpful lady working there also gave us directions to both cemeteries we were trying to find in that area. We weren't having any luck because my brother's GPS was on the fritz, and we didn't have a clear address for either of them.

As we headed out of town we passed THIS colorful location.  It was interesting enough that I told my brother to go around the block so I could get a good photo of it.  As we went around the block the dog took the opportunity to pose.  Norman Rockwell eat your heart out. 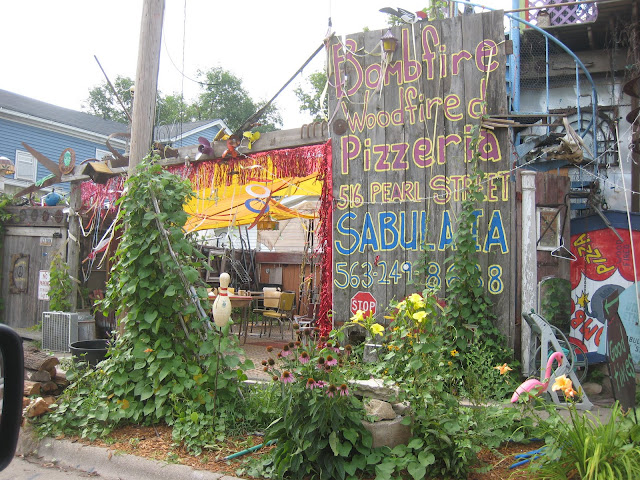 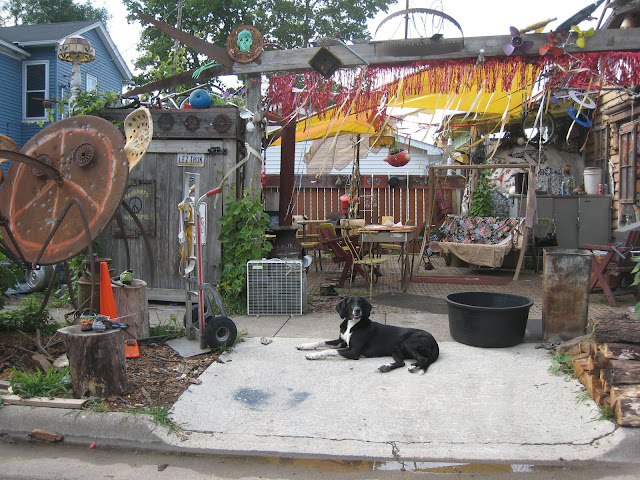 This has gone on longer than I expected so I will sign off for today and finish my tale another day.  I have to mop the floor and go see "Rent" put on by the local theatre company and then home for a seafood boil with the family!
Posted by Margel at 9:06 AM