At the end of yesterday's post we were enjoying the best soft serve ice cream ever in Sabula, Iowa before taking the ice cream merchant's directions to the two cemeteries we were searching for in the area, Evergreen and St. Peter's Catholic cemetery.  Getting to places can be a bit problematic as the Mississippi River has shredded the land at this point and often the route is back down and then up the next shred of land to get to your destination.  And that was the case for us today.

Evergreen  was the closest, and as we followed the directions we were not sure if it was the right place as there was no identification or sign at the entrance.  There was no helpful caretaker or automated kiosk to help us locate our graves here.  So, we turned in and thought we would drive slowly around and see if we could spot a headstone with Guilfoil on it.  Imagine our surprise when we actually found one a few hundred feet into our drive.  I had a record I downloaded more than a year ago from Iowa GenWeb that listed Guilfoils in this cemetery.  They are a bit of a mystery. 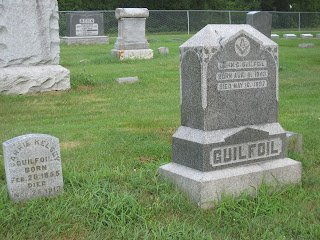 The 1850 census for Elk River Twp. in Clinton county, Iowa lists John Guilfoil living with Thomas Gilshannon and his family.  Thomas' wife Elen was John Guilfoil's daughter and, I assume, that James was her brother.  All are from Pennsylvania.  Elen will die in 1851 after the birth of her second daughter, Nancy and Thomas will remarry shortly thereafter.  Other than this brief record, Elen seems to have vanished.  I am a descendant of Elen through her daughter Eleanor Gilshannon who married James Allen.   John, James and Ann left after Elen's death.   I believe that the Guilfoils in this cemetery, Carrie Kelsey and Mrs. John are connected to my family, but I haven't yet put the pieces together.  We walked around a while to try and find any other Guilfoils but had no luck and the loud rock music filling the cemetery from the young men working on their cars in the neighboring house, hurried us along.  So we took our photos and off we went to St. Peter's where Thomas Gilshannon was buried. 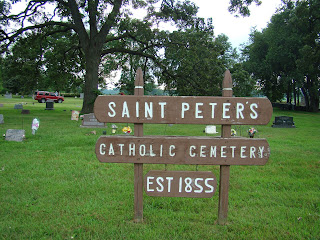 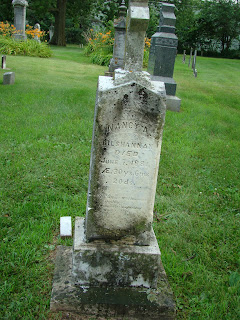 Now this was a small cemetery and it was very easy to locate Thomas' grave.  Before we left home, I asked my brother if he had packed the cemetery kit I got him for Christmas and he said no.  He thought it was just a gag gift, but I told him it wasn't and that he should throw it in.  So he did - still in the Christmas bag!  We had been using the spray bottle to make the writing on headstones more readable in our photos, but this time we pulled out the brush as well as the spray bottle.  The sentimental inscriptions were undecipherable, but the facts were clear on each side.  On one headstone was Nancy, Thomas, and his second wife Bridget Reynolds.  the last side of the monument was blank.  Beside the headstone was one that said Sister and one that said Father.  But where is Elen, his first wife?  This cemetery wasn't established until 1855, and she died in 1851 so it isn't here. I don't know if there are records for this cemetery, but there are recent burials, so I am hopeful that with a little work, we might find out a bit more about the Gilshannon family.  More information always brings with it more questions. 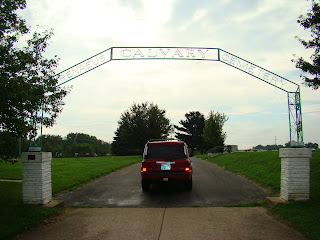 Our last cemetery visit for the day was back in Clinton - St. Irenaeus.  We discovered that it was also known as Calvary.  This was part of our trouble in locating it through Google Maps.  At this cemetery, we used every tool in our "cemetery kit".  This was the location of the McDonnell's graves. Family legend has it that the McDonnell's are direct descendants of MacIan, the Red Fox of Glencoe who was murdered in his bed by a Campbell after a fortnight's hospitality in 1692.  While I haven't proven that to a genealogical standard (and never will, I am sure), it hasn't stopped me from finding out more about this interesting family story.  Imagine my surprise when I found an actual event to go with this old family legend - the Massacre at Glencoe.  Check it out for yourself. 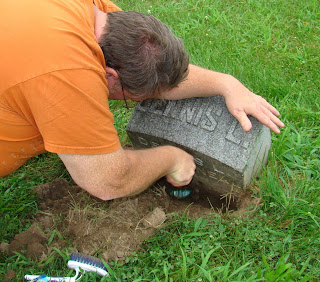 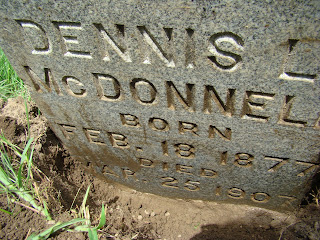 We again easily found the McDonnells as there were not far off the road and the vertical headstones made it easier.  Since I had photos of the headstones from Iowa GenWeb, I knew what I was looking for.  As we walked up to them, I understood why Dennis' headstone was photographed from the top with all of the date information hidden.  It had fallen forward and the inscriptions were buried.  My brother, Dahl, tried to pull it back straight, but it had been like this for a while.  Break out the cemetery kit again!  I supervised while he dug down exposing the front.  He likes to be the "man", and I like to be the supervisor.  This is a good match.  My sister-in-law has been the photographer and general all round gopher on this trip without complaint. She is always willing to do any task that we demand order ask her to do.  She definitely gets another star in her crown for this trip!  We photographed the headstone information and then filled it back in so it wouldn't fall forward any more. . . . . . and there was a sign warning us not to dig up the graves!  Oops!  It's a good thing no one reads this blog to report me.

Tomorrow is the library and historical society.  We mostly sat at a microfilm machine so it will be a short post.  I will finish this tomorrow.  I know what you are thinking - It's about time!
Posted by Margel at 9:08 AM